The making of a farmer 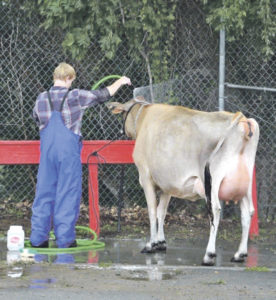 When the youngest Barry decided he wanted his own calf, he received a Jersey as a present. “My dad and grandfather bought her for me. That’s what my dad had. When we got my first cow, that’s what he wanted me to get.” He named her Sophia. Sophia was polled, but the rest of his cows have had the Jersey’s signature thick, gently curved horns. He joined 4-H when he was 12 and stayed a member until the cutoff age of 18.

“I fell in love with Jerseys. They each have their own personalities,” he said.

When he attended the 2020 New England Fall Show at the Big E, he placed third in Showmanship showing a friend’s heifer.

He currently has five Jerseys at his home in West Brookfield, MA, and five Holsteins. “I have been breeding Jerseys and Holsteins for good genetics so I can compete at any show level that I can get into,” he said.

Barry attended the agricultural program at Smith Vocational High School in Northampton. After he graduated, he enrolled in SUNY Cobleskill’s Dairy Management Program from 2017 to 2019 and received an associate’s degree.

He had raised his cows at his father’s farm until he went to college, when he sent his cows up to Cadillac Farm, a 300-cow herd dairy farm managed by Peter Hawkes. “When I went to college, my cows went up to New Hampshire,” he said. He also sold a couple heifers as well as herd bulls to farmers for cows that didn’t catch with AI. He currently has 12 cows up at Cadillac Farm.

Barry is one of 31 youth from 15 states across the country selected to attend the seventh Jersey Youth Academy occurring July 11 – 16 in Columbus, Ohio. Barry’s birthday falls on the last day of the Jersey Academy. “I hope to make it home to celebrate with my family,” he said. It’s a 10- to 12-hour drive home from Ohio, but he confesses that he likes driving. He’s had a lot of practice.

His family has their own trucking and excavating business. He works full-time trucking and making hay deliveries for Nadon Dairy Farm.

What are his plans for the future? “I want to put a barn up and milk cows and have enough pasture for them. I only want a herd of 25 to 30 cows total,” he said. “I plan to do construction and trucking, and do cows as my hobby. I need to be working to pay the bills every day. The cows are just for genetics and showing.”

Barry is looking forward to working further with Jerseys and attending Jersey Academy. “It’s a great breed to work with. I’ve had a lot of opportunities and a chance to meet a lot of people I would not have met otherwise,” he said. He has also learned patience, the tuning fork of a farmer, which will help his wish of creating his own farm come true.