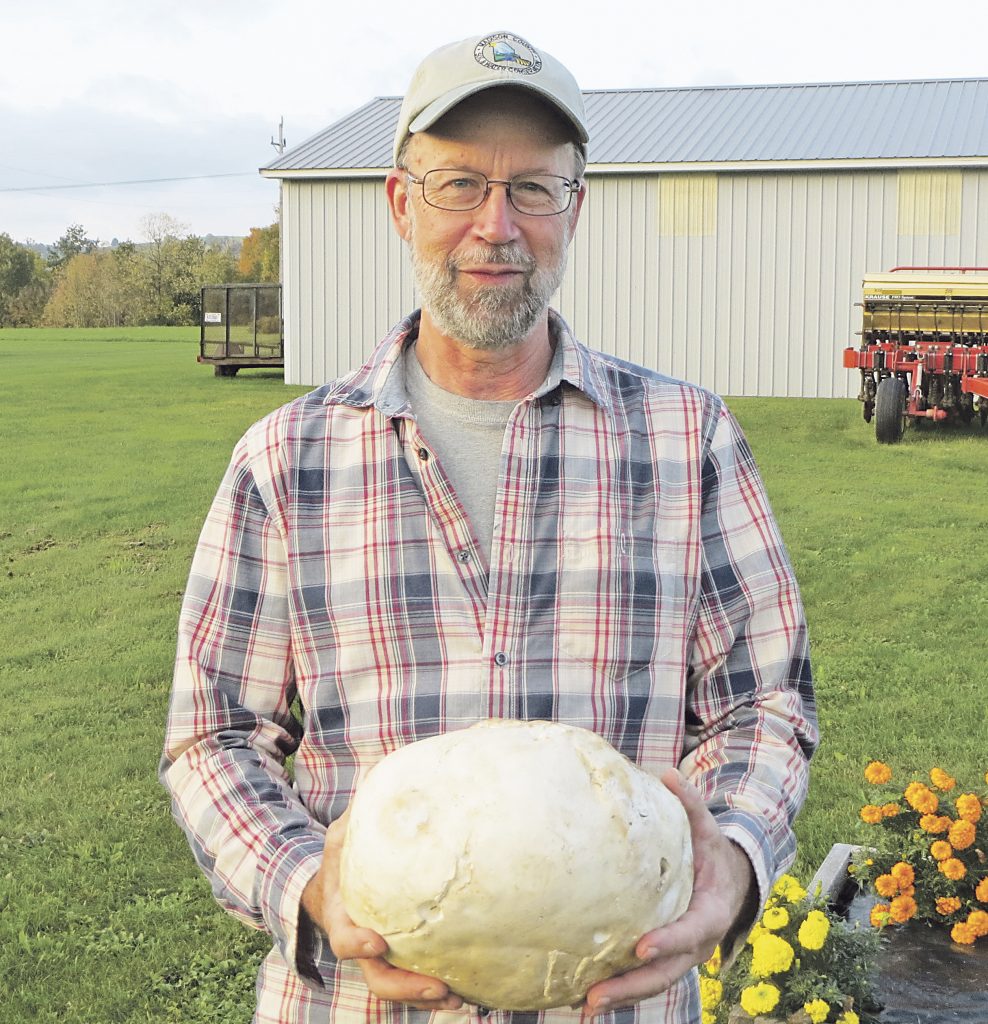 by Troy Bishopp
You see something white from afar. Your heart rate and pace quicken. As you reach the trophy sphere, it becomes apparent you have found the coveted, magical puffball. What a win for your palate and the storytelling that will follow, amidst its tender, earthy flesh sautéing in butter.
It seems the combination of humidity, rain and heat this year has led to a bumper crop of the large, white, globes mysteriously dotting the landscape. There are enough sightings to create quite a culinary buzz over these basketball-sized “Calvatia gigantea” mushrooms.
The magical puffballs are known as saprotrophs, meaning they feed on dead organic matter. They’re more likely found in meadows and grasslands than in the forest. They are always found growing on the ground rather than up in trees. These mushrooms fruit in late summer to early fall and their unusual large size happens quickly which make them seemingly popup overnight.
Experts caution hunters and future eaters to make sure you correctly identify the mushroom and pick it at the right age. Correct identification is crucial. If you think you’ve found a giant puffball the first thing to do is cut it open. It should have thick, hard, white flesh inside. Don’t eat anything with a brown, black, purple, or yellow interior. It may be an “earthball” (Scleroderma citrinum) or some other gastric distress-inducing mushroom.
This white flesh should be solid with no gills. If you see any evidence of gills disregard immediately. Some species, including the deadly Amanita, have a “universal veil” of tissue that surrounds the mushroom when young. This can make it look like a puffball. Inexperienced hunters should check with someone knowledgeable if they think they’ve found a giant puffball.  An incorrect guess can kill if it turns out to be an Aminita!
Eat puffball mushrooms soon after harvesting as they don’t keep well. If you can’t, chill the mushroom down as fast as possible to ensure you get a great shelf life out of your puffballs. The most popular way to eat them is to sauté them in butter or fry them in oil with a crispy batter. These mushrooms can be a versatile food item mixed with other vegetables, broiled alone with a marinade, grilled over a flame to a golden brown, cooked as a replacement for tofu, and used instead of eggplant in any recipe. Some folks are even using a large slice as a pizza dough substitute.
Nutritional analysis indicates puffballs are a good source of protein, carbohydrates, fats, and several micronutrients. The predominant fatty acids in the low calorie puffball are linoleic acid, oleic acid, palmitic acid and stearic acid. The magical puffballs also have possible medicinal uses as well because of all those trillions of spores they produce. The dried spores can slow bleeding if they’re used as a coagulant. They were reportedly used in Native American folk medicine to treat bleeding and prevent infection. It has also been used in beekeeping. The fumes of smoldering fruit-bodies were used to calm bees and allow easier access to the hive.
“A meal without mushrooms is like a day without rain.” ~ John Cage