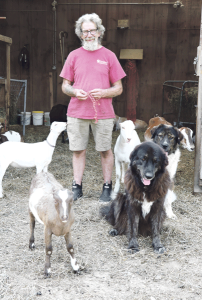 A small herd of goats relaxed in the heat on a sultry summer Sunday inside their barn, guarded by two guardian dogs, Buck and Pearl, at the Little White Goat Dairy owned by Bruce and Rachel Scherer in Orange, MA.

These were LaManchas, a breed with tiny ears that lie tight against their head.

It is theorized that the breed is descended from Murciana goats of the La Mancha region in Spain, many of which were short-eared, brought to the U.S. by Spanish missionaries. According to Rachel, over generations, the short ear trait became dominant. They were registered as a distinct breed in the 1950s. Of medium size, LaManchas are known for their mild temperaments as well as the high quantity of sweet, creamy milk they produce. They are easy keepers, well endowed with hybrid vigor. They acclimate well to other climates, including the ever-changing New England temperatures.

The Scherers started raising goats in 2005, and now have a herd of about 40 LaManchas. Their dairy was named after their herd queen, Little White Goat (registered name Velveteen). “She was born in a year with many kids with all-white coats, so she was met with ‘Oh, look – another little white goat!’ She passed away earlier this year at age 14, after a good long reign,” said Rachel.

They breed their goats to kid in late spring. “The older girls are bred first, for the end of March, beginning of April,” said Bruce.

The kids were reclining against their dams in the cool barn. “They keep that family relationship for years – mothers, daughters, granddaughters,” he said. Female kids are either retained in the herd or sold to other goat dairies. The male kids are culled for meat.

“Most dairies separate the kids and moms at birth. We do dam-raised kids. They are with their moms without a break for a number of weeks. Then the kids are put in the pen at night so we’ll have milk in the morning from their dams,” said Bruce.

The goats head to the milking room each morning. The milk goes into the cooling tank and when it is time to be made into products it’s off to the “make room.” “Depending on what Rachel is making, the milk goes through an elaborate process for whatever cheese she is making,” Bruce explained, as Rachel is the cheesemaker.

Currently, the refrigerator is full of trays of Bloomy Rind cheeses. She also makes chevre logs, marinated feta, feta in brine, ricotta, flavored cheeses, Labne, yogurt and kefir. Cheeses for sale, as well as goat and chicken meat and eggs, are found in the refrigerator and the 22-cubic foot freezer at their on-site farm stand, open daily. When she has time, Rachel weaves at her loom which is set up in the store. A short-haired breed, LaManchas are not used for their fiber.

The Scherers bought their property over four decades ago. “Forty years ago, it was all woods. All the pastures you see and the buildings you see are things we built,” said Bruce. He knows well the 24×72’ dimensions of the building that houses the dairy operation – he built it. Completely powered by solar, one shed is covered with a 10KW solar panel system that powers the dairy and barn. A 5KW system powers their house.

The goats have free choice minerals from containers inside the barn, organic grain and hay from an organically maintained pasture. “The big thing for us since we raise animals is making sure they’re healthy. If they’re not healthy, you don’t have healthy food,” said Bruce.

Having worked with the goats since 2005, they have encountered difficult births, and goats that got into plants that they shouldn’t, the main culprit being mountain laurel. They closely monitor for internal parasites. “In the old days, people would just worm on a regular schedule. We only use dewormers if an animal has an unhealthy load. This is monitored by observing the goats’ body condition, their coat and whether they have pale gums or inner eyelids. The diagnosis is made by actually counting the quantity of eggs in their droppings, called a fecal egg count – not the most fun way to spend a day in the garage,” said Rachel.

They rely on their guardian dogs, Buck and Pearl. Bruce said, “They are here to protect the herd from predators. We want predators to know that the dogs are here. They aren’t always as calm and placid. At night, when we are in the house, we hear them going up the hill and down to the swamp. They work as a team.”