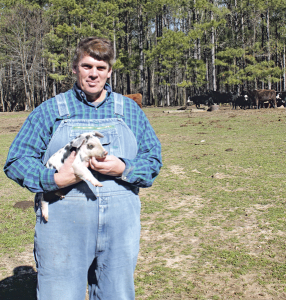 Mike and Suzanne Jones have been raising a family on a small outdoor livestock farm in north central North Carolina since 2004.

The Joneses pasture raise hogs as well as some cattle. They are able to make it work by selling retail to the consumer, primarily at the North Carolina State Farmers Market in Raleigh.

Prior to farming full-time, Mike Jones worked a number of jobs in the agriculture industry. He managed Tractor Supply Company stores. He worked for large hog processors. He worked as a statewide livestock Extension agent.

“I was helping people do what I do now,” he said.

Mike began pasture raising hogs because he was “focused on the environment – for me and the animals.”

Mike had enjoyed raising confinement hogs, but the indoor air quality was difficult for him – and for the hogs, he felt.

What the Joneses didn’t know was that some consumers have a preference for the taste of pasture raised pork. “Someone suggested to me that outdoor pork tastes better,” Mike said. Since then, they have focused on the taste and quality of their product.

Today the Joneses raise hogs on 73 acres in Franklin County, using a mixture of Duroc, Berkshire, Hampshire and Chester White genetics. All of the breeding is done with their own boars. They process about 250 animals per year.

“Raising hogs outside, we can’t control the environment,” Mike said. “It can be harder on the animals, in the cold and wet, like this past fall and winter, when we had lots of rainfall every week. It’s harder on the people to work in that environment too.”

Pasture-raised hogs do take longer to mature than hogs raised indoors, but the Joneses can get added value by marketing the environment in which their 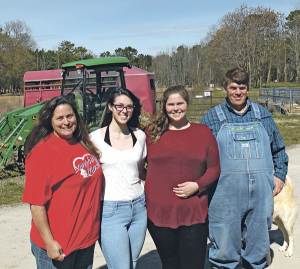 “We like to say it’s good for the animals, good for the environment, good for people,” Suzanne said. “Our customers like that we raise them in a natural way. The animals get to live their entire life cycle living their instincts. They have plenty of room to dig and wallow.”

“They get to spend time with each other too,” Mike said. “That’s important, because pigs, like people, are social creatures.”

“We don’t have to use as much antibiotics,” Suzanne said. “NC State has come out here to do studies. They’ve found that we have no MRSA, no salmonella, and our air quality is better.”

The Joneses use two different processors, which allows them to be able to offer an increased variety of products to their customers.

“People like to have choice,” Mike said. The Joneses’ customers can choose between smoked and fresh hocks, between applewood-smoked and pecan-smoked bacon. Pet owners can get pet food from ground organs and ground scrap pork.

Today, though, the Joneses are happy to care for their hogs all the way to the consumers’ hands.

“Making a living has been a challenge,” Mike said, “but it’s been worth it.”