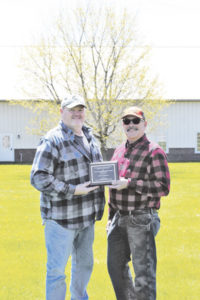 According to last year’s honoree and this year’s presenter, Douglas Fisher, “Madison County’s Soil and Water Conservation District Manager, Steve Lorraine, is the John Wayne of conservation. Steve has done it all for New York State and Northeast Conservation,” said Fisher. “He exhibits Wayne’s ‘true grit’ and ‘doing what must be done.’ He has never sought this type of recognition, but has always been at the forefront of policy and programs beneficial to conservation.”

Lorraine has served as NYS CDEA president, vice president and division rep, committee chair, symposium and skills workshop instructor as well as a Madison County district manager and valuable employee. Madison County SWCD Board Chair Doug Holdridge said, “He has a genuine concern for mentoring district employees as well as his unrelenting service to the agricultural community. The Madison County SWCD has garnered millions of dollars for customer projects and initiatives, added a diverse staff of certified professionals and has been recognized nationally for its achievements, all under the leadership of Mr. Lorraine.”

Assistant Director of the NYS Soil & Water Conservation Committee Brian Steinmuller said that he could always rely on Lorraine to give an unvarnished opinion on a proposed direction. Warren County SWCD District Manager Jim Liebrum said, “Steve asks the hard questions, offers sound advice and solutions and is a terrific person to have as a representative of conservation districts in New York. In John Wayne fashion, he also gets right to the point and holds people accountable.” 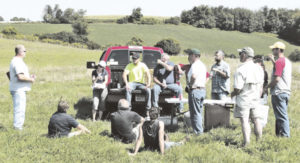 Wendy Walsh, district manager of Tioga County SWCD, credits Lorraine as bringing insight and value to the Upper Susquehanna Coalition meetings and is always working to support programing. “He embodies the tenacious, independent thinker mindset, fairness, stubbornness and a hard-working, rational implementer of conservation that Mr. Croney and farmers are proud of.”

“I am humbled to carry out the legacy of work by Mr. Croney and thank you for the recognition,” said Lorraine. He shared this honor with his wife Kim, son Greg, daughters Laura and Mattie, and new granddaughter Octavia, in addition to his district board and staff.

This year’s awards banquet also honored other deserving land stewards. The President’s Award was presented to Monroe County S&WCD’s Account Clerk Kristin White for her years of service to the association as treasurer and board member. The Partnership Appreciation Award was bestowed on Greg Albrecht from NYS Department of Ag & Markets. The District Director Award honored farmer John Wright, district chair of the Orange County S&WCD for his years of dedicated service. Division Merit Awards were awarded to Aliana Roberage of Ontario County S&WCD, Alexis Lyndaker of Lewis County S&WCD, Jennifer Kelly of Chenango County S&WCD, Maren Alexander from Warren County S&WCD and the Special Project Award went to the Urban Ag Fresh Connections out of Cortland County S&WCD.

To learn more and get connected to your local NYS CDEA staff, visit nyscdea.com.