The ‘graying’ of PA farm families 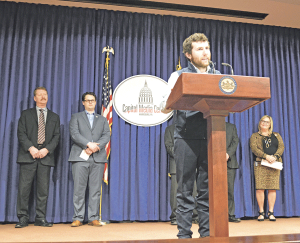 With the “graying” of Pennsylvania farm families, State Senator Elder Vogel has introduced legislation that encourages existing farmers and landowners to work with beginning farmers to help them get started. Vogel’s Senate Bill 478 provides a personal income tax credit for landowners who lease or sell their land, buildings and equipment to beginning farmers.

“It’s a starting point,” Vogel said. “It’s something that’s never been done before. This is out-of-the-box thinking. Secretary Russell Redding has been very much thinking out of that box as far as PA Preferred, young farmers, work force development and things like that.” Vogel noted politics are unpredictable, and that his bill “may not make it to the finish line,” but everyone is hanging in to see where it goes.

Noting a heavy farmer attendance at the state capitol on Farm Bureau Day, State Senate Majority Leader Jake Corman said, “Last year I spoke at their lunch and challenged my fellow legislators, including myself and the governor. It’s nice to sit with the farmers and tell them you’re for them, but what are we doing to assist the agriculture industry? At that time there was a dairy crisis, and what were we doing to step up and make things better for farms in our districts and the commonwealth? I always look at agriculture as a national security issue. If we are not producing the resources that we need to sustain ourselves, then we are putting ourselves at risk.”

Corman added that when demographics come into the equation, “where we have four farmers over the age of 65, we have one farmer under the age of 35.” He concluded that this is a demographic that doesn’t work – one that needs to be addressed.

“Most of the farms in my district have been passed down from generation to generation,” said State Senator Judy Ward. “The owners and operators have taken a tremendous amount of pride in following in the footsteps of their grandparents and great-grandparents. For them, it isn’t just how they make a living; it’s truly a way of life. Unfortunately, that legacy is now threatened by a perfect storm of bad market conditions, high cost of operations and an aging population.”

All of those factors create different barriers that prevent the next generation of farmers from getting their foot in the door in one of Pennsylvania’s key industries. That’s what makes this proposed legislation so vital. “Young farmers face a huge hurdle in the affordability of farmland,” Ward said. “New farmers have to invest an extraordinary amount of money before that first seed ever touches the ground.”

Tyler Shaw, a hay farmer from Dauphin County, was the emotional surprise of the news conference. “I was lucky enough to rent five acres of ground about 10 years ago when I was only 14 years old to start my adventures in agriculture,” he began. “I was not raised by a family that was involved in agriculture.” Neither his parents nor grandparents were farmers. “I am a first generation farmer!” 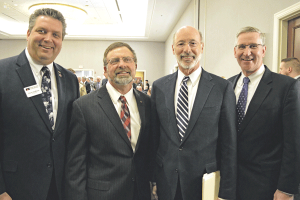 Shaw chronicled his 4-H projects and bookkeeping, his dedication to his work, using antiques as basic equipment, and knocking on doors to find people who were willing to take a chance on a rookie. “My grandfather told me ‘Do what you love and love what you do, and you’ll never work a day in your life.’” It was here that his voice broke; he paused to gather his thoughts. “Today I do what I love every day. I’m a full-time farmer now and I also help with my family’s business – we own and operate a fiber mill in Fishing Creek Valley. Moving forward, I want to keep growing my operation, and I’m always looking for new opportunities and new avenues to do that.”

Cumberland County dairy farmer Jason Nailor found farming rough going when he thought about entering it in his teens. Instead, he earned a degree in electronics and waited for a sign that things might turn around for him agriculturally. He saw that sign when another farmer decided to retire and was selling his cows. “I thought this could be the foot in the door that I need to get started,” he said.

He decided to build his operation a little bit at a time. But the deal he made with this farmer meant that he would have to have his feed brought into the farm. “As any good farmer knows, you want to keep your inputs as low as possible to maximize profitability,” he said. In the ensuing 11 years he’s been farming, “I’ve seen record low prices, rock-bottom milk prices which fell to me one year after I started my own herd, and I’ve also seen seven-dollars-a-bushel corn, 15-dollar soybeans and currently we’re seeing $300 a ton straw.” The lesson he learned: when you’re buying all the feed for your cows, there’s not a whole lot of room left for the bottom line. “Grow it on the farm and keep it on the farm,” he said.

“Land access is the top challenge that folks are struggling with,” said David Howard, the Northeast campaigns director for the National Young Farmers Coalition. “This bill is a very important piece to solving the puzzle of land access.”