The global beef supply: Thinking beyond your borders 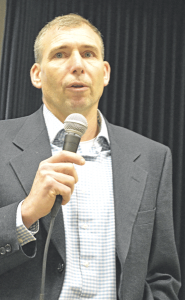 Dr. Henry Zerbe is vice president of protein procurement and innovation for Wendy’s Quality Supply Chain Co-op Inc. When he spoke at the 51st annual Lancaster, PA, Cattle Feeders Day, he mentioned he had lived in Ecuador for a year – “one of the best things in my life in terms of gaining an appreciation for the benefits that we have here in the country we live in, and an appreciation for all the riches and blessings we have.”

He also lived in Australia for a year about 10 years ago. While there he worked for two large research groups that cooperate with the industry, academia and the government. “At first glance you get there and ask yourself ‘Man, what is going on?’ But after you’re there for a while, you start to understand the environment, the pressures and where their market supplies and channels are. It makes perfect sense, and it makes you step back and question. Maybe we could do some things differently back home.” Zerbe has traveled extensively to see production agriculture and to learn every step of the way.

Zerbe’s company has him leading the procurement team for Wendy’s. “I have three 30-somethings that work with me. One of those folks buys all the chicken that we serve at Wendy’s across the United States. One buys all the beef and cheese. And one buys all the bacon, eggs, all the sausage and fish.” There are about 6,000 Wendy’s restaurants in the U.S.

Speaking in terms of customers, “In 2025, we will have as many people over 65 as we have under 65,” he said. His presentation also pointed out that the healthfulness of the food we eat decreases by 1.7% for every hour that passes in the day. This means that people generally eat healthiest at breakfast and will most likely eat unhealthier food later in the day.

“We have a tradition in agriculture of push-through marketing,” Zerbe noted. “We like to sell people what we produce. You wouldn’t believe how hard it is to get people to sell you what you want rather than what they produce.”

“Think about Americans getting older and better educated about what they eat, how they eat and how they feel,” said Zerbe. “One of those things that determines when they are choosing between this assisted living program or that one [when looking to the future] is going to be the meal plan. We have an opportunity between now and then to make our animal food proteins a healthier product.”

There is a lot of food waste in the U.S. You can see it in your home at dinner, at restaurants – all around you. Estimates are that about 40% of the food we grow gets thrown away. What Zerbe finds interesting is “that’s not different for developed countries versus developing countries. The difference is where it happens.” Data show that 800 million live every day with hunger or food insecurity. If global food waste were a country, it would be the third largest generator of greenhouse gases in the world, behind China and the U.S.

Speaking of China, one of our main trading partners, Zerbe asked this question: “How can China produce enough safe food for its growing population if they all start eating like Americans?” They can’t. It takes about one acre to feed the average U.S. consumer; China has about one-fifth of arable acreage per citizen, including fields degraded by pollution.

“China is a big country and it has a lot of people,” said Zerbe. “It simply doesn’t have the resources within its borders to feed the people it has now or the people it will have in the future. Half of the world’s pigs were raised in China,” he added as he touched on African swine fever (ASF). “They also consume about half the world’s pork.” Twenty percent of global protein in Chinese pork – and ASF has claimed about 50% of their swine herd. That, in turn, spurred a lot of global trade.

“We only see what’s happening in our county, in our state and in our country. So we’re going to have to get a bit more worldly in our point of view if we want to understand marketing and global perspectives,” he continued.

Conversely, global beef exports increased 38% from 2013 to 2018. But Zerbe affirms that the U.S. isn’t the only game in town. In the past five years Brazil, Argentina and Uruguay increased their exports by 67%. Their numbers could jump if Beijing lowers or does away with a 24% import levy on South American beef. Brazil is currently seeking re-approval to export fresh beef into the U.S.

“The volatility in the global protein marketplace right now is not out friend,” Zerbe cautioned. “And we have to be aware of that.”