The family that shows together 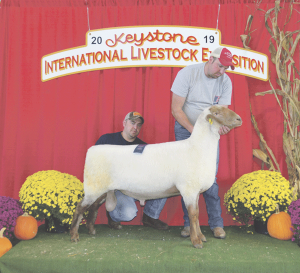 Laureen, Josh and Billy Howe didn’t have a lot of spare time to enjoy the sheep show during the Keystone International Livestock Expo in Harrisburg, PA. The Wayland, NY family was busy preparing and showing their own sheep as well as helping others.

Although Laureen was busy throughout the show, her sons Josh and Billy handled the majority of the preparation and presentation of the family’s sheep. The brothers started raising livestock during their 4-H days, and were involved in pig projects as well as sheep breeding and market lamb projects.

During 4-H, Josh and Billy expanded their interests beyond livestock. They participated in a variety of general projects including carpentry, gardening and sewing. The brothers also participated in leadline classes at the New York State Fair, sporting the wool vests and shorts they had made.

Josh’s breed of choice during 4-H was Hampshires. “I purchased Hampshires from my mom and dad when Josh was old enough to get into 4-H,” said Laureen. “When Billy started to show, I purchased Corriedales from my mom and dad so he’d have a different breed. I didn’t want the brothers to have to show against each other.” After Josh was out of 4-H, the family sold the Hampshires, but recently added the breed to the flock last year. They kept the Corriedales, and have some natural colored Corriedales.

The family agrees that the Tunis breed has grown in popularity since they started raising them. Laureen said years ago, many Tunis had problems such as poor feet and legs. “They also had bad docks because they’re a fat tail breed,” she said. “Old time breeders like my mom and dad kept developing and improving the breed to make it attractive and more acceptable in the show ring. That’s when the breed started to catch on.” The illustration of a Tunis sheep on the association’s registration papers is the ram from Laureen’s mother’s breeding program.

The 40 acres that comprise Old Glory Farm includes both pasture and hay for the family’s 80 sheep. High-tensile electric fence and livestock guardian dogs keep the flock safe. First cutting hay is put up as large round bales, and higher quality second cutting is made in small square bales. Although sheep have access to pasture most of the year, they’re supplemented with a custom-designed ration delivered regularly to the farm. Because parasites aren’t a major issue for the Howes, they deworm just twice a year. Sheep rotated throughout pastures, and monitored to prevent overgrazing.

For most of the year, the sheep are kept as one flock. For breeding, ewes are separated by breed, then the flock is mixed again after lambing. CIDRs (controlled internal drug release) are used to aid in producing fall-born lambs. Spring lambs are born between December and March, with most lambs born in January and February. 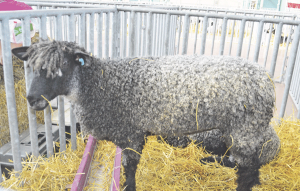 “We give all of the sheep two chances,” said Laureen. “If a ewe lamb has problems the first year, we give her a second chance. But if she doesn’t pan out in the second year, she goes down the road. We don’t want to maintain that in our flock.”

The family sells animals through a variety of markets, including purebred stock and meat. Lambs are finished on feed and sent to market at around 100 to 130 pounds.

“We have a good freezer lamb trade, with a lot of repeat customers,” said Laureen. The family sells quite a few breeding stock quality animals, both privately and through breed sales.

The latest breed addition to the flock is natural-colored Lincolns, which are Laureen’s interest. “I’m fascinated with them,” she said. “The people who are involved with the breed are wonderful. The two I have were purchased as fall lambs last year. We had the champion ewe at the New York State Fair, so I think we have some good breeding.”

Although Lincolns are not a recognized breed at the Keystone show, Laureen explains that Lincoln breeders are working to change that. “The first two years, we have to have enough numbers and exhibitors, and we receive half premiums,” she said. “I want to support the Lincolns because that’s what we did with the Tunis. As the breed is becoming established at Keystone, white Lincolns are shown along with natural colored Lincolns. When the Lincoln Association sanctions the breed, they’ll show separately.”

Josh and Billy shear their own sheep once a year except the Lincolns, which are sheared three times a year according to show schedules. Lincolns that will be shown carry a mostly natural fleece, with some minor trimming to shape them.

As for the trend to show most breeds without fleece, Josh says it allows the judge a better and more accurate view of the animal. “Everything is done so they can see the body of the animal,” he said, explaining what the judge is looking for in the show ring. “We stretch their necks, make them look wide and make the rear end look full.”

The brothers discuss the ways in which show sheep have evolved in type over the years. “All the breeds have changed,” said Josh. “They were breeding for long, framey sheep but they’re more reasonable now. I think all the breeds have to go through that before they come back to the reality of what the breed actually is.”

Josh and Billy work full time jobs off the farm, but agree that it takes quite a bit of time to maintain a high-quality flock throughout the year. As far as the sheep industry, Josh sees a lot of improvement. “The quality of show sheep is going up, and lamb is staying high,” he said. “I think we’re going to see more people buying lamb to eat because it’s a healthy meat, and they’ll spend more for a good product.”

As for the future of young people remaining active in livestock programs through 4-H or FFA, the Howes believe it will be necessary for families to become involved and committed to working with youth.