The expense that pays 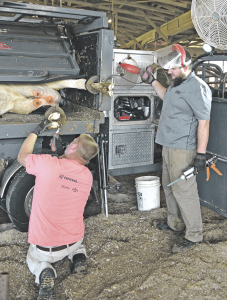 Lameness in dairy cows is a serious issue. Cows that can’t walk properly cost money in one way or another, and also present a serious welfare issue. Lame animals can easily become bullying targets of more aggressive cows, and will reduce their lying time simply because it’s difficult to recline and rise.

Cows that experience lameness during one lactation are more likely to have continued lameness, but in many cases, proper hoof trimming can solve the problem. Some chronic hoof issues are hereditary – good records can show whether a particular cow’s dam or other offspring experienced ongoing hoof problems.

The goal of hoof trimming is to provide a flat surface that will bear the weight of the cow. Overgrown toes can result in lower heels, and when those heels are in constant contact with manure slurry, the risk of infection rises. Maintaining a scheduled hoof trimming with a reliable professional can make a significant difference in an increase in milk production and reduced lameness.

Nate Beiler of Lebanon, PA, has been trimming hooves professionally since he graduated from high school. Nate and his brothers learned the skill from their father.

“I worked with my dad since I was 10 years old,” said Nate. “In summer, when I wasn’t in school, I’d do the odds and ends – chase cows, wrap feet, write down numbers. When my dad got into trimming, the chutes were a lot cheaper, and the only hydraulics available then was the tilt table.”

Nate and his brother Sam worked as a hoof trimming team recently at a large dairy farm where the herdsman had prepared a list of cows to be trimmed. Ideally, each cow sees the hoof trimmer twice a year.

As Nate and Sam set up their equipment, the herdsman and a few helpers worked quietly, moving the cows to a small holding area with adequate bedding for good footing. A chute created by a set of gates adjacent to the holding area accommodates just two cows at a time, which minimizes stress and waiting time.

When Nate decided to make a serious career of hoof trimming, he invested in a hydraulic tilt table. Although most large dairy farms keep a tilt table to handle hoof issues between visits from the trimmer, Nate’s setup allows him to move cows through quickly and without stress.

As the cow enters the trimming chute, a thickly padded squeeze panel cradles the animal, and as soon as the table begins to tilt, hydraulic leg holders secure each hoof. The squeeze effect of the table provides a sense of security for the cow and prevents her from struggling. Nate and Sam check the position of the cow to make sure she’s comfortable prior to starting any work. “We’re trying to give the cow as much comfort as we can,” said Nate. With an ideal view of each cow’s underside while she’s tilted, the brothers check for any udder issues that might be difficult for milkers to see when the cow is standing.

The majority of cows coming through for hoof trimming require just the basics, starting with a toe-to-heel inspection to check for any issues that need to be corrected. On dairy farms that use sand bedding, the brothers begin the process with a quick once-over with a grinder to remove excess sand and other debris, which adds life to more expensive hoof trimming equipment.

A second grinder is used for the actual trimming, followed by a hoof knife to pare out any potential problem spots and create a balanced walking surface. Hoof walls that are too long or too short can result in stress to the cow’s leg muscles, which can lead to improper locomotion and difficulty lying and rising.

With the brothers working as a precision team, most cows are in the chute, tilted on table and finished in less than three minutes. For the occasional cow that has a soft sole or other hoof issue, Nate assesses the problem and may apply topical medication, a block for extra protection and a wrap to ensure everything stays in place.

When the job is finished, the brothers break down their gear and prepare to move their rig to the next farm. Nate said he has a list of clients he sees every other week, and works on smaller dairy farms in between.

There’s a lot of weight riding on just four hooves, so each one must be as healthy as possible. Although genetics play a significant role in cow structure, maintaining hooves to the most ideal shape possible is what matters when the cow is working, and that’s what the Beiler brothers aim to achieve.