The evolution of Howling Flats Farm 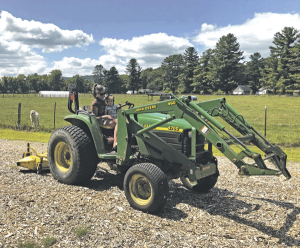 “Chickens are the gateway drug of farming!”

Kelley Babbin’s explanation of how she became the owner and operator of Howling Flats Farm is less than subtle, to say the least. Just like her side-splitting statement suggests, Babbin developed a love of raising farm animals when first caring for a brood of chickens.

In 2010, Babbin and her son John Mochak purchased 15 acres in North Canaan, CT, and Howling Flats was born. In that first year, while tending to their chickens, Babbin leased a portion of the property to another farmer so his four cows could graze.

It wasn’t long before Babbin bought those four cows.

She laughed, “Today we have forty.” She has plenty of room. Before Howling Flats, the property was home to a horse farm, and it came complete with a 10,000 square foot barn. “I know it’s 10,000, because I had to re-roof every square inch of it,” she said. The barn has undergone a major overhaul. The central riding ring inside has been replaced with enough stalls to fit not just the herd of 40 cows but also 18 sheep and 100 pigs.

There are also four goats, but they are strictly pets. Howling Flats is a total family operation, and as members of the family, the goats are not allowed to shirk their chores. Babbin explained, “They take care of the weeding for us.”

Today, Howling Flats offers customers grass-fed, dry-aged beef and pasture-raised pork. According to Babbin, “Our herd of Angus cattle is never fed hormones or antibiotics for growth promotion. We feed our pigs local grain and in the summer we add in as many vegetables out of the garden as they’ll eat. Our pigs are also free of hormones for growth promotion.”

All the care that Babbin and Mochak have taken to maintain the highest standards of care for their animals was recently recognized by A Greener World (AGW,) a non-profit organization which promotes ecologically sound and humane farming practices. Howling Flats was awarded AGW’s “Certified Animal Welfare Approved” certification in November. This designation is granted only to farms passing an annual audit ensuring that animals are raised outdoors on pasture or range in accordance with the highest animal welfare standards while using sustainable agriculture methods.

Babbin said customers can purchase Howling Flats’ beef and pork at the farm, and they also sell meat wholesale to farms like Marble Valley Farm, an organic vegetable farm in nearby Kent, CT. Online sales are rapidly expanding. “Right now, I make the deliveries myself. I’ve driven all over the state and up into New Hampshire. People think I’m crazy!” Babbin said. She and Mochak are in the process of introducing a shipping option for online buyers. They also plan to introduce lamb to the farm’s offerings next season. At the same time, they will be scaling back on their chicken operation. Unfortunately, this was not necessarily a planned development.

Babbin lamented, “We recently had trouble with a fox and a bobcat. They really did a number on our chickens and we don’t have quite so many anymore.”

“I love doing this. I feel good about feeding our beef and pork to my family, and I feel good knowing that we can help others who want to feed their children good, healthy food,” she said.