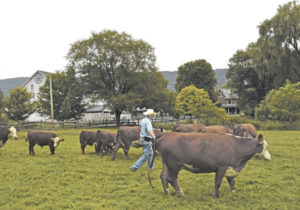 Visitors to Slayton’s BearDance, owned by Paul and Bette Slayton, are impressed by the Hereford cattle grazing on the rolling hills. But it isn’t just about cattle – Paul said being in the cattle business means being in the people business.

Paul grew up on a diversified crop and livestock farm in Illinois and said he’s always been involved with cattle. He showed steers and heifers in 4-H and FFA, and recalled his early livestock experience as the start of learning about both animal husbandry and people.

“Some of my heroes when I was a kid were people in the livestock business, whether it was cattle, hogs or chickens,” said Paul. “Through FFA we had a chance to not only show, but also go to meetings and conventions. That’s the way to meet key people who help mold your life.” As an FFA member, Paul received the Star Farmer Award, which is given to active FFA members who have demonstrated outstanding agricultural skills and production competence.

When Paul was a senior animal science major at the University of Illinois, he considered working for a publication or a breed association. “I sent letters and applications, but didn’t get a job that way,” he said. “A couple years later, after I had worked on a farm in Illinois, I got a call from the American Hereford Association (AHA). They had tracked me down and wanted to follow up on the application I had sent.” The AHA hired Slayton as a fieldman covering several states.

While still working as an AHA fieldman, Paul received a call from Pennsylvania Hereford breeder Leon Falk of Falkland Farms who wanted Paul to manage his operation. “I was familiar with Mr. Falk because I worked on his advertising with the Hereford publication in Kansas City,” said Paul. “His manager had retired, so I applied. He offered me the job – it was the best five years.”

After Falk died in 1988, Paul and Bette remained at Falkland Farms for five years, and by the time the Falkland herd dispersed, the couple had accumulated a small herd of excellent cattle. Between Paul’s work with the AHA, a solid foundation managing a purebred Hereford operation and Bette’s family’s involvement with Herefords, there was no question which breed they’d raise.

The Slaytons’ next move was the purchase of their 320-acre farm in Bedford, PA, where they continued to improve their herd. When they purchased their farm in 1995, Paul and Bette spent a lot of time remodeling, fixing fences and preparing for cattle. Paul was out in a field and spotted what he could only identify as black things, ovals, on a hillside. “We hadn’t moved our cows here yet, so they couldn’t be our cows,” he said. “As I got closer, I realized they were black bears – a mother with four cubs. I never thought of bears as speedy, but they ran and were gone.”

Although that was the first and last bear sighting, Paul and Bette used the incident to name their farm. They combined the bear sighting with a bit of fun and came up with Slayton’s BearDance. The herd currently includes 50 cows bred for early spring calving, but Paul said that number can change at any time because he often sells bred females.

Herefords are well-suited for crossbreeding programs, whether it’s the cow or the bull. “Herefords’ role in a crossbreeding program is significantly more than most other crossbreds,” said Paul. “The black baldie cow is second to none – she’s a great specimen.” Although Angus may out-carcass Herefords, the Angus x Hereford cross makes up in feed efficiency, reproduction, disposition and other economically valuable traits. Older cattlemen especially value the docility of the Hereford cow, and Paul enjoys being able to take visitors to the field without having to worry about ill-tempered cows.

To advance genetic progress, Paul uses ET and AI. “The only way to keep up and get ahead is to use the best available genetics you possibly can,” he said. “Whether that’s through ET or AI, you have to stay on the leading edge or you’ll fall behind real quick.” He said significant improvement can be made from one year to the next by using the best possible genetics.

Like other conscientious breeders, Paul is an advocate of genomics, and said the AHA has done significant genomic work to improve the breed. All BearDance cattle have been DNA tested, which allows Paul to determine what to expect from each mating. “The Hereford Association is on the leading edge of what they can do to help breeders make selections based on genomics to improve their herd,” he said. “I make selections based more on DNA results than on phenotype.” Paul added that some customers still make purchase decisions based on phenotype, so it’s important that animals look good in addition to having solid genetics.

At weaning, Paul selects the best 10 bull calves to develop as herd bulls. Some will go to the Livestock Evaluation Center in State College where they’re on test for 112 days. This year, BearDance cattle will be represented in a similar bull test in West Virginia. He also retains a group of bull calves on the farm which are offered for sale via private treaty.

The cowherd is managed in a rotational grazing system starting in spring. “We graze rigidly at first, but as summer wanes and grasses don’t come back, we open more area for the cows,” said Paul. “Instead of one grazing cell with eight acres, by this time of the year, they can go wherever they want to.” When the grazing season ends, the herd is maintained on dry hay. The Slaytons have instituted numerous environmental measures, including stream crossings, stream bank fencing, cross fencing and wildlife habitat.

While newcomers will make mistakes, the number of mistakes can be reduced by getting good advice. “Getting someone to listen to their questions and help them make choices is probably the best thing they can do,” he said. “We are in the people business – everyone wants to help – and a lot of people are willing to give their time to someone new.”