The blessing of farming at Cloverfield Farms 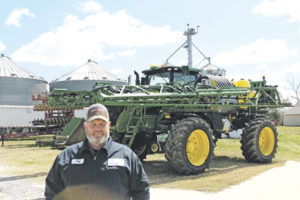 CHAMPLAIN, VA – Jay Hundley and his family farm about 6,000 acres in eastern Virginia, in Essex, King George, Caroline and Richmond counties. They raise corn, soybeans, wheat, barley, oats and put up some orchardgrass hay. About 1,900 acres are irrigated, thanks to 26 center pivots, supplied mostly by surface water. Some of their wheat, barley and oats are grown for seed. They attribute their success to the sandy loam of the area, the hard work of their employees, the good nature of the landowners they work with to be able to farm so many acres and luck.

“A lot of luck,” Hundley said.

Cloverfield Farms is headquartered in upper Essex County, where it’s been located since 1965. The farm was founded by Jay’s grandfather James H. Hundley Sr., and was continued by Jay’s father James H. Hundley Jr. (Jimmie). Jay’s two sons Travis and Jason today work on the farm, as does his brother Robert. Their other brother Franklin runs Hundley Seed Company, a seed cleaning and conditioning business also located in Champlain.

“We’ve got a great group of guys,” Hundley said. “They know when it’s time to work – I don’t have to ask them. That’s what keeps this farm going.”

Back then, the challenges were different. “We did everything we could to survive,” Jay recalled. “We cleared land for other farmers, we cut timber, we raised hogs. Hogs were good to us back in the ‘80s.” The family had seven hog houses and raised hogs until the 1990s.

Today the farm has storage for 600,000 bushels of grain as well as a dry storage shed capable of holding 800 tons of fertilizer. There’s also significant liquid storage capacity as well as certified scales.

The rise in commodity prices has helped the farm’s outlook, but the rise in input prices and the disruption to the supply chain is a real factor as well. “We’re seeing difficulties bringing in parts and chemicals,” Hundley said.

Besides, you have to have a harvest to take advantage of high commodity prices, and last year was up and down – an excellent bean harvest was followed by a disastrous corn crop.

“We lost our corn crop,” Hundley said. “It was not even worth harvesting.” It was a matter of not enough rain, followed by too much.

“The rain cut off in June,” Hundley recalled. “It was a dry July, and then a rainy fall.” The rain was ample August through December – too ample. October saw 20 inches of rain, and one day in November saw six inches of rain. “We ended up with lots of drowned-out spots.”

While the farm is typically strictly no-till, last year due to the wet ground when harvesting soybeans, they ended up having to cultivate some fields this year – even with putting tracks on the combine.

Because the land Hundley farms sits over a high water table, some of the fields incorporate drainage tiles. Most of the land is level, though, which permits the scope of the operation.

They use the land which is too hilly to run a herd of about three dozen commercial black cattle.

Since 2008, the farm has been using technology to measure yields and apply variable rate seeding and fertilizer and lime applications.

Whereas years ago the Hundleys ran a White combine, today their combines are Case, the maker of much of their equipment. They have two Case 8250 combines, two Case 16/31 split row planters and one Case 24 row planter. Their 120-foot boom sprayer is made by John Deere, a 4045.

Maintaining equipment is important to keeping the operation going, and also to be a seed provider. The farm grows for seed six varieties of soft red winter wheat, three varieties of oats and some barley. Keeping all that equipment clean when moving between crops is critical when farming for seed. The drills have to be cleaned out, and the combines get a once over, with the shields taken off and the inside of the machine and the doors and the grain tank all blown out to prevent the introduction of foreign material. The trailers likewise have to be cleaned.

The farm also plants 12 varieties of beans and eight varieties of corn to optimize the planting and harvesting season.

Hundley has many fond memories of the farm, both recent and distant. In 2018, for example, the farm was host to the Virginia Ag Expo. Further back, he can remember harvesting with a pull-behind silage cutter. And there was the time they grow clover for seed.

“Growing up, I would rather work any day than go to school,” he recalled.

Today, Hundley gets to continue to following his passion. That’s not luck – that’s a blessing.