The best of the best at the NYS Supreme Show

The program was open to all county fair and beef shows in the Empire State. Each winner was invited to join other county champions at the Supreme Show in Syracuse on Aug. 31. The NYBPA, Hubner Seeds, William Kent Inc. and the NY Simmental Association sponsored the Supreme Champion Beef Female by donating a chair to the winner. Purina Animal Nutrition sponsored the Supreme Champions with $1,000 checks and the Reserve Champions with $500 checks. Winners also received trophies and banners from the NYS Fair.

Leading the judging team was Kevin Jensen of Jensen Brothers Herefords in Courtland, KS. He and the other judges observed the opening Parade of Champions before whittling down entries in nearly a dozen heats to a “Sweet 16” grouping. Final decisions were made after intense deliberation among the judging team.

Back to Beef After a Year Off

Karen Glenister, co-superintendent of beef cattle at the NYS Fair, said it was very exciting to see everyone at the fair again after 2020, when the annual event was cancelled due to the pandemic.

“We had good participation this year,” Glenister said. “There were a lot of return exhibitors.”

In addition to the much-anticipated NYBPA Supreme Show, the Beef Barn added four breed shows to their usual lineup this year: Red Angus, Belted Galloway, Shorthorn and Sim/Angus-Sim/Solution. As always, there were shows for AOB, Charolais, Angus, Highland, Hereford, White Park and Simmental. (Keep an eye on Country Folks and our Facebook page for photos of the winners.)

“We’re hopeful for more livestock of all types at the New York State Fair next year,” Glenister said. “We’re also looking forward to having 4-H back next year.” 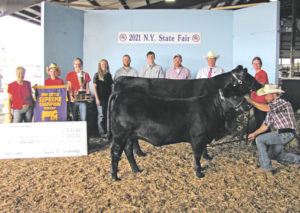 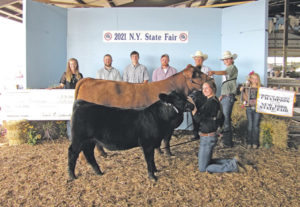 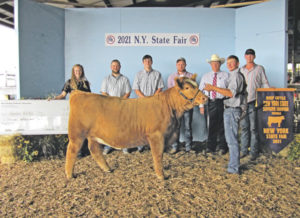 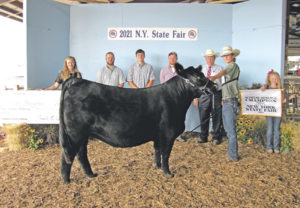