The beauty of diversity at Asgaard Farm 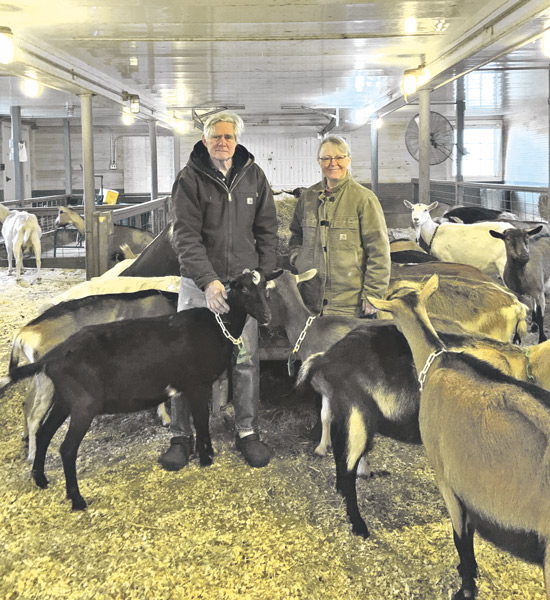 The historic Asgaard Farm is located in the heart of the Adirondack Mountains, in the town of Au Sable Forks, NY. From the 1930s through the 1970s, the farm was owned by renowned artist Rockwell Kent, who managed it as a Jersey dairy. After Kent’s death, the farm fell into disrepair until it was purchased by David Brunner and Rhonda Butler in 1988. In 2020, the farm was placed on the National Register of Historic Places.

The original farm was 300 acres, but Brunner and Butler have increased their land base to 1,500 acres. There are 300 acres of active farmland; the remainder is wetlands and actively managed forest land. “We have pretty good soil – mostly Adams loamy sand – but when we bought the farm, the organic matter and fertility was low,” Brunner said.

Through the 1990s and early 2000s, while the pair were living at Asgaard part-time, they began rebuilding the soil through an organic crop rotation. Each year they would plow and disc about 30 acres. “In year one of the rotation, we would plant wheat, oats or rye. For the next three years, the land would be in grasses and legumes – a mix of timothy, clover, orchard grass and some alfalfa,” Brunner said. They were able to sell these small grains to Champlain Valley Milling in Vermont.

Around 2008, the two moved to the farm full-time. It was always their intent to put the farm back into production by introducing some form of livestock. “Our original thought was to put Jersey cows back on the farm, but someone gave us a few goats, and our thoughts shifted to a goat dairy,” Brunner said. Within a few years of obtaining their first goats, they were milking 60 does. French Alpines are the mainstay of the herd, but they also have American Alpine, Toggenburg, Nubian and La Mancha genetics. The does are buck bred.

When they started, they milked into buckets with a portable vacuum pump. As the herd grew and the milk volume increased, they invested in a creamery, completed in 2008. It’s 60-by-28 feet with a full basement used for aging and storing cheese. They have two C. Van’t Reit cheese vats (26 gallons and 105 gallons). Since the herd is seasonal, cheese production takes place from late March when the kids are born to the end of November when the herd is dried off.

The next improvement they made was a new parlor. The low line pit parlor, finished in 2010, was dug from the end of the original stanchion barn. Twelve goats enter the parlor at once and six units are in use at a time while the other six goats are cleaned and prepped for milking. From the parlor, the milk is pumped into two small bulk tanks in the creamery.

The goats are fed two pounds of grain per head each day in the parlor. “We look for goats that have the potential for a minimum of 2,000 pounds per lactation,” Butler said. “If they don’t achieve that by the end of the second year, we look at culling them.”

Asgaard produces 8,000 to 10,000 pounds of cheese per year. Butler is the cheesemaker and typically has the help of one full-time employee and part-time help from two seasonal interns. She took cheesemaking classes through the Vermont Institute of Artisan Cheese and Sterling College, and attends local workshops and visits other creameries. They produce seven cheeses – three pasteurized (fresh chèvre, a Loire Valley, France-inspired Bûche, and a pyramid-shaped soft-ripened cheese) and four aged and unpasteurized (gouda, tomme, feta and blue-style cheese, all of which are aged a minimum of 60 days). They sell their cheese at three local farmers markets, through in-person and online farm stores and to local retailers and restaurants.

“We typically make the hard cheeses early in the season because demand for our fresh cheeses is softer in the spring and we need to get them aging,” Butler said. “As the summer season hits, we focus more on the soft cheeses and then transition back to the hard styles in the fall so we’ll have product to sell all through the winter.” They also make goat milk soap and caramels.

While the dairy is the linchpin of their business, the couple values diversity from both an economic and farm health perspective. In addition to the dairy, they raise 30 to 45 head of Devon and Hereford beef cattle, 150 laying hens, 500 to 1,000 broilers and 15 pigs each year. Each species plays a vital role in the management of the farm’s 300 acres of grassland.

A pasture rotation typically begins with the goat herd, followed by the beeves. In order to control goat parasites, goats will not go back on that same ground for a minimum of 60 days. This acts as a form of parasite control, but Butler explained that each species also acts as a dead-end parasite host for the other. She said, “If the goats ingest a parasite that is harmful to cows, it dies in their digestive tract and the larvae are never shed. On the flip side, the cow’s digestive system kills larvae that the goats are susceptible to.”

The laying hens and broilers, raised in movable chicken tractors, follow last in the grazing rotation. The fowl not only add a different type of fertilizer but are very helpful in controlling parasite and insect larval growth and spreading out the cow manure. After the poultry moves through a paddock, Brunner occasionally pasture clips with an eight-foot rotary mower.

The pigs are raised in the forested borders adjacent to the grasslands. “They are helping us to create silvopastures that serve as shade for the cows and goats,” Brunner said. “It also creates a nice environment for grass to grow in the woods.” The pigs also consume all of the whey produced by the creamery.

When grazing season ends, the cattle are outwintered, and the goats are housed in a newer pole barn. In a typical year, Brunner puts up 500 to 600 dry round bales for the cows and 4,000 square bales for the goats. Some of the stored feed comes out of the pasture rotation and some from an additional 200 rented acres. Each season Brunner selects about 20 acres and spreads purchased poultry compost at a rate of two tons per acre.

While Brunner admits the diversity of managing so many enterprises is challenging, he said, “Our diversity becomes a kind of insurance against the risks that are inherent in farming. It also enables us to embrace seasonality. Just when the beef runs out, fresh chickens are back on the table. Just when you think the season for fresh cheese has come to a close, our prized aged cheeses come onto the scene. This is the beauty of a diverse farm and precisely the model we are building here at Asgaard Farm.”