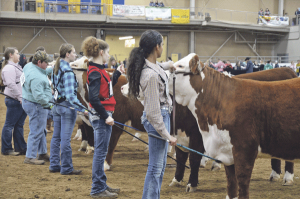 HARRISBURG, PA — Kaitlin Bell of Chester County, makes history as the first person to win Beef Cattle Supreme in both the heifer and the bull categories at the Pennsylvania Farm Show. Kaitlin also had the honor of both the heifer and bull winner to be bred and owned on her own family farm. Through awards and activities, she has received a full ride to the College of Agriculture at Kansas State University.

The Grand Champion Bull and Heifer from each breed were selected to compete for the title of Beef Cattle Supreme.

With the largest fed-cattle industry in the world, the United States is the world’s largest producer of beef, primarily high-quality, grain-fed beef for domestic and export use. Pennsylvania is the top cattle producing state in the Northeast United States. There are 13,176 beef cattle farms raising over 1.6 M cattle and calves with a value of almost $700 M. The largest category of farms have between 55 and 99 animals with sales of almost $77 M.

The average age of PA Producer’s is 52 and 60% have been in the industry for 15+ years. The average age of beef producers is increasing steadily as current beef producers are aging. The PA Farm Show takes pride in encouraging young agriculturalist to dedicate time to Pennsylvania’s number one industry- agriculture. The Farm Show provides a hands-on experience with livestock for youth exhibitors who come from all over the state with varying backgrounds and knowledge. At the Farm Show, today’s youth train to become tomorrow’s livestock producers and play a role in the bigger picture of producing a safe and high-quality product.