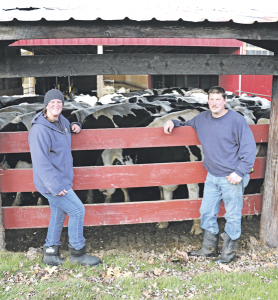 Thanksgiving doesn’t happen just one day a year for dairy farmer Victor Ziemba of Broadlawn Farm in Adams, MA. “We’ve been doing that ever since the fire started. The community helped in every possible way.”

On an extremely windy night on Sept. 23, 2018, an electrical fire started in a nightlight above the cows’ feeding area and quickly traveled to just above the hay barn where 450 round bales were stored. Their three barns were all connected. It was approximately 2 a.m. The wind helped jump the flames from barn to barn. By the time his son Mark Ziemba, who lives on the farm, woke to do morning milking, the barns were fully engulfed.

As it was Sunday, he had gotten up an hour earlier, as was their tradition on Sunday, to get a head start on the day’s chores, starting at 3 a.m. rather than the usual 4 a.m., to have more time off in the afternoon. That one extra hour made all the difference.

“Mark managed to get all the cows out of the free stall barn,” recalled Victor. “After Mark got the cows out, they all turned around and started to go back to the barn” – the usual panic reaction of cows. Their registered Holstein bull perished in his pen.

“Thirteen different fire departments responded,” Victor said. “The community support was tremendous – all the volunteers, everyone in town that came to reroute the cows into the milking parlor. Volunteers brought beverages, soda, bottled water. The bottled water went like flies because the firemen here were so thirsty.”

Volunteers helped put up a fence to route the cows away from the barn toward the milking parlor. Even people who didn’t know how to handle animals lent a hand.

They lost a tractor that was in the free stall barn that had just been built, the round bales and some silage. Most of the silage was contained, housed in three bunker-style concrete silos in various sizes averaging 40-by-100 feet. “Heat from the fire itself scorched the silos,” said Victor.

Amidst it all, they did not lose one full day of milking.

“It was complete chaos. Your first impression is ‘Wow, we lost everything,’” he said. Community support kept pouring in.

As they had lost all their hay, throughout the next year until the spring, local farmers gave them 500 – 600 round bales. Other local farms offered round bales at a discounted price, having them pay only the trucking to get the bales to the farm.

As the fire came right at harvest time for corn, volunteers from the Galusha family from Williamstown came and chopped their corn fields for them. “We would never had gotten it done in time. They did a wonderful job, chopping the corn. They came with their own trucks and tools. We worked alongside of them. That was greatly appreciated,” Victor said. 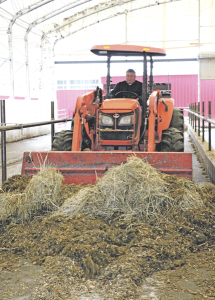 His nephew Mike Ziemba’s daughter-in-law, JoAnne Johnson Ziemba, started a GoFundMe fundraiser that garnered $75,000 in one month. A separate fundraiser, a spaghetti dinner, raised another $15,000.

Now, 14 months later, they have built the shells for a 60-by-120-foot hay storage barn, a 60-by-100-foot free stall barn, and a 60-by-80 barn. Four days before Thanksgiving 2019, they finished the eating area and moved the cows inside. “It was over a year before we got them back on a regular schedule,” Victor noted. They had been being kept and fed outside.

“Since the fire, we had to cut back to pay bills and expenses. We milk 150 cows now,” Victor said. They are 25 – 30% registered Holsteins, and the rest are grade cows.

Out of the 1,000 acres they own and work, 350 is tillable. The rest is woodlands and hillsides. Victor is a second-generation dairy farmer. His father Stanley Ziemba purchased the farm in 1935.

Victor is grateful to have two sons, Mark and Timothy, who work on the farm, as well as Mark’s girlfriend Sonia, his nephew Michael and his grandson Tim Jr. There are also people that help out occasionally. “We do like to take a day off every now and then,” Victor said. “I tell people we work only seven days a week, and the rest of the time we have off.”

The Ziemba family would like to thank all the volunteers, the farmers and everyone else who helped during the fire and since the fire. Mark Ziemba said, “If it wasn’t for them, we wouldn’t have continued. You can’t do this on your own.”