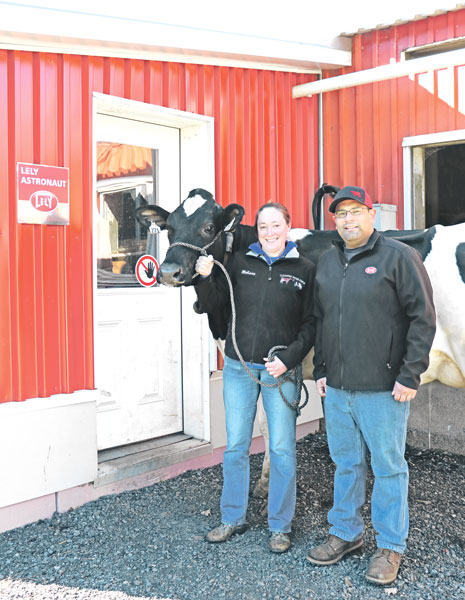 This year, Melissa Griffin and her family have much to be thankful for: No more getting up at 3:30 in the morning for her father, Paul Willis, to milk their 50 cows. They can now get up at 6 a.m. to do morning chores and feeding. This summer they could also continue cutting hay and chopping corn without running back to the barn at 3 p.m. to milk. How? They installed one Lely Astronaut A5 robotic milking machine that operates 24/7 that milks the cows for them.

Last year, at the height of COVID, they took out 12 stalls to have an addition built to install the robotic milker. This included building a comfortable office with a window through which they can see the cows after they emerge from the Lely milking pen.

“It’s been exciting. It is a lot more efficient. You can do crops without having to stop – do a lot more,” said Griffin, who also serves as secretary of the Massachusetts Dairy Promotion Board. They harvest more than 50 acres of hay and 50 acres of corn from their own 330-acre farm and rented land.

This year, Harris and Gray Excavating and Concrete Contractors from Ashfield, MA, finished pouring concrete on Nov. 5. Dole Brothers Contractors from Shelburne, MA, are set to build another 64-by-40-foot addition to extend the current approximately 100-by-40-foot barn. (Dole Brothers built the new addition last year too.) The current barn has 42 stalls since they installed the robotic milker. The new addition will allow them to have 57 stalls, plus 11 stalls for dry cows and one cow pen nursery. They can go back up to milking almost 60 cows, a mix of registered Holsteins and Brown Swiss.

The additions are part of a two phase project. After a long application process that took two years to complete, they were awarded a $150,000 Farm Viability Enhancement Program (FVEP) grant through the Massachusetts Department of Agricultural Resources (MDAR). In order to obtain the grant, they had to place their land in a 15-year agricultural covenant, assuring that the land would be used only for agricultural purposes. They installed the Lely robotic milking machine prior to knowing they would win the grant.

Currently, their cows supply 8,000 pounds of milk every other day that is picked up by Agrimark, as they are members of the Cabot Cheese Cooperative. “We are up almost 20 pounds more milk per cow than when we were milking them in the parlor. We are just scratching the surface of what is possible,” said Griffin, a fifth-generation farmer on the only dairy farm remaining in Buckland, MA.

Griffin has worked full-time on the farm with her father since 2005. Griffin did the morning feeding and chores, and still does. For her entire lifetime, her father had gotten up in the dead of night to do the milking – but not anymore, thanks to the Lely robotic milker.  Her mom Judy helps out when needed.

Melissa was married on the farm to Adam Griffin in 2014. They met at a county fair. He is well versed in dairy farming and currently works for Lely North America as their product manager of software and data. For 10 years before that, he worked as the dairy ID programs manager for the Holstein Association USA Inc.

The farm still networks with other local farmers; they supply manure for fertilizer at nearby Atherton Farm.

Their farm adds to the typical (but fast disappearing) New England landscape, with its wide, freshly-mowed fields and contented cows grazing in the pasture providing a bucolic scene as leaf peepers and Hilltown regulars alike travel along Route 112. The cows emit their own pleasure in their surroundings as they lie in the pasture or wait at the gate to be fed their grain twice daily, as though they are having their own daily thanksgiving.