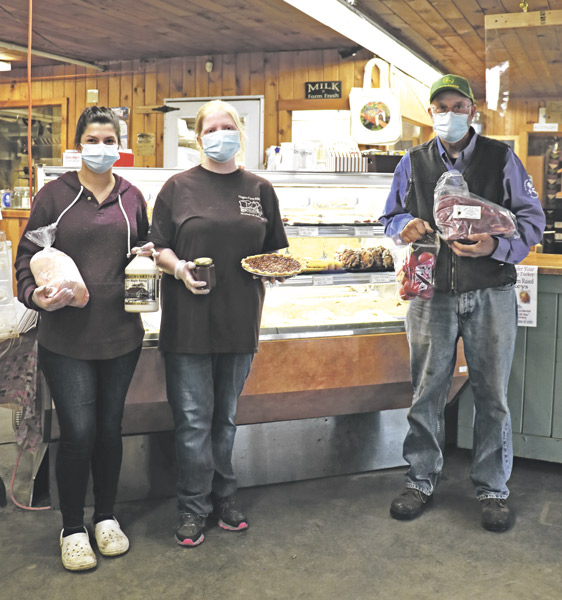 Two weeks before Thanksgiving, all the pre-orders for the 100 fresh turkeys sold at Hager’s Farm Market had long been sold. Besides the usual 30-pound great white turkeys, they also offered a few heirloom turkeys that are smaller, catering to the smaller gatherings expected this Thanksgiving.

Business at the market has increased this year about 20% because of the pandemic. Their brick-and-mortar 30-by-50-foot market building in Shelburne, MA, sits on 54 acres where they grow eight acres of apples, four acres of peaches and vegetables.

The rest of the farm’s 700 acres are in Colrain, where 10 acres are planted in their signature Pioneer Valley Popcorn, and where they raise their herd of 100 grass-fed beef cattle, mainly Herefords. This year was their fifth harvest of their popular popcorn.

“We have everything all the time. It’s a matter of having it so people know they can buy it here,” said Chip Hager. The farm and farm market are owned by third generation farmer Chip and his wife Sherry, their daughter Kim and their son-in-law Aaron Stevens. When Chip’s grandfather, Leon Hager, married a Merrifield, he married into a farm that dates back to the 1700s, when land grants were being given away.

“When we opened the market in 2009, everybody told us we were crazy because the economy was so terrible,” said Chip. Being accessible to customers right on Route 2 was their ace in the hole. Eleven years later, they’re riding out the COVID-19 storm.

“I manage the outside ‘stuff’ here at the market, growing vegetables on a few acres, the fruit, the mechanical part of the store. My daughter manages personnel, the store and bookkeeping as well as working in the kitchen. Sherry works here and off the farm as an RN. Aaron helps out here when needed,” Chip said. When Aaron is working on the farm, he helps raise the chickens, turkeys, beef and their pigs, a mix of Hampshire and Yorkshires, and assists in their maple syrup operation. The Hagers’ daughter-in-law Bethany Wiles also works at the store.

They raise hay on 125 acres, and harvest about 1,000 round bales. They plan to take a tiny break from raising pigs (10 to 15 at a time) and broilers (two batches of 200 each time) during the bitter cold of December through February.

“With the ongoing COVID situation, it’s tough to keep the store open to have people come in. We have to find a balance,” said Chip, who is grateful it’s warm enough to leave the door open for the approximately 100-plus foot traffic customers a day. “The good weather this fall has been just great. A lot of people have come out that didn’t go on vacation to look at the leaves.”

In mid-March they closed the store to the public and started selling products ordered online, passed through the window to customers. “We worked with a skeleton crew,” Chip said. They’re now open seven days a week.

They are in the process of upgrading the online end of their business to offer pickup or have products shipped. “We put in a lot of effort since COVID started so people can get most of their basic needs met here, so people don’t have to go so many places. Some customers do all their weekly shopping here so they don’t have to go into bigger stores.”

They offer a full menu of takeout food (burgers, breakfast sandwiches, eggs, bacon, sausage, home fries) to go every day but Tuesday and Wednesday, so the kitchen staff can have a “weekend” off. People are welcome to eat their food outside on one of their picnic tables nestled in the orchard or by the store, and pick up an ice cream cone to go for dessert.

They sell local beverages, beer and wine, local cheeses and pies made in-house. They have a lot of experience in knowing what their customers want from their beginning of selling beef from the store in their home in Colrain since 2000. Once a dairy, they sold their herd, primarily Holsteins, in 2015. They send animals to Adams Slaughterhouse in Athol every four to six weeks. They offer a full line of maple syrup from the 2,000 gallons they make a year from 6,500 taps, low-sugar rhubarb and peach jams and baked goods.

“We are trying to make our store a safe and convenient place to shop – trying to provide a little bit more than before,” said Chip. “This holiday we’re really grateful that the public has continued to do business with us. We’ve gotten the support of a lot more customers. We hope that it continues. When I talk to people in the store, they say no matter what changes, they’ll keep shopping here. We take it day by day.”