Teeing up for the future 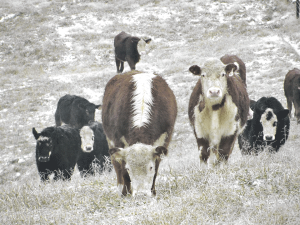 “Waste not, want not.” It’s a well-known proverb. Although the origins of this expression date back to the late 18th century, it became far more popular and saw more everyday use after being a featured line in the hit 1930s film “Topper Takes a Trip.”

It means the less we waste, the less we lack in the future. This is sound advice for any business. It is exemplified by the ingenuity of those at Rider’s Backfield Farm Beef. At Rider’s, they turn what most see as overabundance into pure profit.

Located in the heart of the Blue Ridge Mountains in Etlan, VA, Rider’s is owned and operated by Robin and Jimmy Rider. Jimmy is a sixth generation farmer whose family came from Scotland in the late 1770s and settled in Madison County, VA, three miles from the present farm’s location. For generations, they were primarily subsistence farmers, with Jimmy’s fourth-great-grandfather known as a local “hog baron.” In addition to being a born-and-bred farmer, Jimmy also brings his past experience as a carpenter and as a foreman with a large construction firm into service at Rider’s.

Robin’s family is no less pedigreed. Her family tree goes back to 15th century England and then on to New England. In addition to working at Rider’s, Robin works as a nurse practitioner.

Robin and Jimmy were married in 1982 and took ownership of Rider’s from Jimmy’s family in 2001. The farm itself sits on 27 acres, but Robin and Jimmy lease 75 adjoining acres on which to tend their herd. The herd itself consists on average of 50 cows.

“Our beef is raised ‘pharmaceutically clean,’” said Robin, “in that we don’t feed antibiotics nor implant or feed hormones to our beef. In addition, we do not apply biosolids or sludge to our pastures or to those that we lease and manage. Our beef is always on green grass pastures and are never confined in a feedlot, even to finishing. We follow rotational grazing practices and move our steers as the grass allows and per the season, using polywire techniques or from field to field. Our steers do receive a very small ration of custom mixed dry grain for daily consumption to ensure tenderness and tastiness at the finishing stage. The ration does not consist of fermented or soy products. The amount of dry grain they receive is really a minor part of our beef’s diet. We call it their dessert and the look on their faces while they eat is just like watching someone eat ice cream on a hot day in July.”

Rider’s beef is a top draw at weekly farmers markets throughout Madison County. For the past five years Rider’s beef has been sold at the Old Country Store, a shop run by a Mennonite congregation in Culpeper, VA. In addition, Robin’s brother Allan Clark owns and operates his own farm, Thornton River Orchard and Market, just outside of Washington, D.C. Allan brings his sister’s beef products to farmers markets in the capital city area regularly.

Robin and Jimmy are very proud of the fact that they were one of just two farms that, between 2012 and 2013, shipped beef directly to U.S. troops in Afghanistan. “There was a physician from California,” she said. “He and his surfing buddy both served in the military reserves as surgeons. This doctor had had our beef before and liked it very much. When they were both activated and deployed overseas, these doctors arranged for us to ship our beef, mostly our kielbasa and bratwurst grillers, straight to them.”

As for how Rider’s wastes not and wants not? In a word – soap.

“We always had all this leftover beef tallow at season’s end,” Robin explained. “We process 40 to 48 steers a season – that’s a lot of leftover fat from the herd. I just thought ‘Why are we letting all this go to waste?’ There had to be some way to use it.” Robin began using the tallow to start her increasingly popular all-natural line of soap.

“Our soap is gentle enough for your newborn and your grandmother. Our soap is as natural as it gets with our beef tallow (which we render), olive and organic hemp oil and essential oils for fragrance,” she said. “We’ve found that the lavender in particular is the most popular option with men. Jimmy uses it not only for washing, but also for shampooing and shaving.” Rider’s soaps have become a much valued source of revenue for the farm.

While many farms are looking toward growing their enterprises in the seasons to come, Robin and Jimmy are sanguine about their future, and are looking to keep things simple, with an emphasis on perfection over expansion.

“We want to have everything set up in just such a way that, when we’re 75, we’ll still be able to handle everything. We love what we do, and we want to keep on doing it for as long as we can,” Robin said.