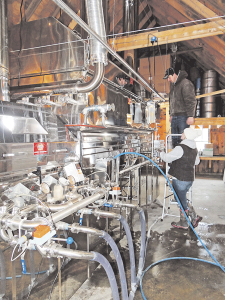 In the hills of Onondaga County, between Tully and Otisco, lies a “sweet spot” where Dutch Hill Maple, LLC is currently tapping about 6,200 maples and is expecting to produce 3,000 gallons of pure maple syrup this year.

Dutch Hill Maple began in 1968, with Nate’s dad, Dave, tapping just a handful of trees in his backyard, producing just a bit of syrup each year.

“My earliest maple memory was that I was small enough to ride around on my dad’s shoulders when he was working in the woods, tapping trees and working on lines,” Nate recalled. “He would always carry me around on his shoulders when he worked in the woods and he taught me how to tap trees. As I got older I would follow him and he would drill the holes and I would tap them.”

Nate said he also remembers how deep the snow would be and he would follow behind his dad.

“I would walk in his footsteps.”

A lot has changed since then, when there were no tubing lines, vacuum pumps or reverse osmosis (RO).

Now, with an updated sugar-house built in 2003 and vacuum system installed in 2004, followed up with the first RO around installed in 2007 and a bigger, improved RO installed in 2018; Dave, Nate and Cristy currently run approximately 3-miles of tree line.

Equipment and supplies primarily come from Countryside Hardware in DeRuyter, NY, and Schoolyard Sugarbush in Moravia. Insurance is through Farm Family.

“We were awarded the EQIP grant which assisted in the purchase of our new evaporator and RO. Other than that, we’ve paid for everything,” said Cristy.

The young couple both graduated in the class of 2006 from Tully High School, but put off continuing education and jumped into working full time.

“I found myself working in banking for 10 years — in management the latter part of that — and Nate worked in construction, operating heavy equipment,” Cristy explained.

Cristy was never exposed to the maple industry prior to dating Nate and explains that although they attended the same school, she did not really know him until after graduation. 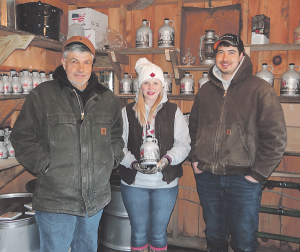 They married in 2013, purchasing their own property over the hill from the sugar-house a year later. The new property, of course, included its own good stand of sugarbush.

Since then, Dutch Hill Maple has more than doubled their production.

“For quite a while a big obstacle was the fact we were both working full-time jobs that didn’t stop at 40-hours, and trying to fit our business around them,” explained Cristy. “Most nights we would be awake until way past midnight trying to make products and complete orders. We also had a baby right in the midst of one of our busiest times. We finally decided to make the jump to full-time, which was our end goal. We couldn’t be happier with our decision to focus our time and energy on our own business…but somehow, we’re still just as busy!”

Occasional equipment malfunctions and the financial stress of growing a business are all part of the operation.

Cristy plays a major role in day-to-day operations at Dutch Hill Maple, which includes developing and maintaining an active website, keeping on top of social media and marketing — while taking care of the couple’s baby.

“I’m very proud to say we have a very engaging social media platform with a growing audience,” said Cristy. “I’m not sure how much business is derived from that piece itself, but it has definitely created loyalty and a personal connection to our customers.”

New maple products have been added over the past few years, including bourbon barrel, aged maple syrup.

“We aged our maple syrup in a bourbon barrel — from the Woodford Reserve Distillery in Kentucky — for six months. This aging gives our syrup a hint of bourbon taste. You can use it as you would regular maple syrup and it’s great as a finishing glaze on meats or veggies or drizzled on ice cream,” said Cristy.

Farmers markets, such as the Syracuse Regional Market, are one outlet utilized in marketing these products.

Family members, such as Nate’s brother Darren and Cristy’s sister, Colleen help with production when they are able. But most of the business is handled by Nate, Cristy and Dave.

Nate and Cristy have received awards for their syrup statewide.

“We are honored to have won the New York State Fair Grand Champion for our syrup the past two years (2017 & 2018) and we are so excited to say that we won New York Farm Bureau’s Young Farmers & Ranchers Achievement Award in 2018!” said Cristy.

“It was an amazing opportunity — and we placed in the top 10 of the nation!” Cristy reports.

Future plans are in the works.

The original sugar-house may be remodeled for use as an Air B&B.

“We want to focus on agritourism and give people the opportunity to come learn about maple and experience new things,” Cristy remarked. 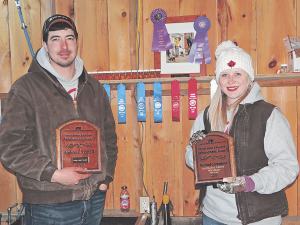 Currently, Cristy works part-time with the NYS Maple Producers’ Association. Nate serves on their board of directors.

The young couple also serves on the board of directors for the Onondaga County Farm Bureau.

“Honestly, if someone had told me 15 years ago that maple would literally be my life, I probably would have thought they were crazy!” Cristy admitted with a laugh. “I had very different plans for myself! But, I’m very grateful to be in the ‘sweet spot’ I’m in now. Pun intended!”

For more information on Dutch Hill Maple go to www.dutchhillmaple.com