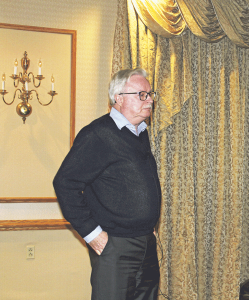 Swanton said plants “know” weeds are near and respond to their presence, even if the plants’ light and nutrients aren’t threatened by the weeds’ encroachment. The “conversation” between plants and weeds can affect their growth and farmers’ yields. Swanton is an adjunct professor in the Department of Plant Agriculture at University of Guelph in Ontario, Canada.

“Crop seedlings are not passive organisms,” Swanton said. “They can’t run, but sure can respond rapidly.”

“Once a corn plant has a conversation with a weed, it changes everything,” Swanton said.

He said neighboring vegetation increases the amount of far red light a plant receives. Research shows that even without any physical contact, root contact, or competition for water, nutrients or light, plants “know” when weeds are near. Swanton showed a picture of two potted soybean plants, each nested in a larger pot of the same soil type. One set of pots served as the control. With the other set, the larger pot was sown with weed seeds. Even though the soybean plant in the treated set was higher than the weeds and shared no soil — thus eliminating any competition — the plant in that set did not thrive.

Swanton said the most vital aspect of weed management is timing. While many farmers assume that large weeds cause the most dramatic effects on yield, Swanton said, “It’s not the big weed that’s competitive.”

It’s actually the tiniest, earliest emerging weeds that are most competitive. He also added that his research showed yield loss caused by emerging weed seedlings varies with crop leaf stage and is both rapid and irreversible.

“Even though I controlled the weeds with glysophate, the crop never came back up to 100%,” Swanton said. “The growth stage of when those weeds emerge is important. But you may not need a follow-up spray unless the weeds interfere with harvestability.”

He also observed that crop seedlings prior to emerging can detect above-ground weeds.

“Seeds about ready to emerge can sense a weed above ground and change its morphology,” Swanton said. “Before it was out of the ground, it can sense competition and change, preparing for battle by changing its antioxidants. A cover crop can become the weed if the cover crop is still green.”

Killing off the cover before planting can help prevent this problem.

He found that his unifoliate soybean seedlings had fewer root nodules, thanks to neighboring weeds.

Add to that any other plant stressors, such as drought, and a farmer has a real yield issue on his hands.

He also said neighboring weeds quickly change the physiology of the crop seedling by reflecting far red light onto crop plants. That increases the levels of hydrogen peroxide in crop leaves through the far red light. If plants have too much hydrogen peroxide, that causes cell destruction.

“Altering the physiology of the crop seedling will have a significant effect on the ability of a crop seedling to recover from stress,” Swanton said. “Under stress, your plants produce high levels of free radicals.”

What’s more troubling is that the plant looks fine to the farmer.

“The plant is still green, but screaming ‘Help, I’m stressed,’“ Swanton said. “You can’t see it.”

Swanton said a field experiment with corn also indicated that “weeds will rapidly reduce the rate of growth and subsequent accumulation of total dry matter per plan,” he said. “The reduction in growth rate at silking will affect yield of corn.”

The time at which corn plants become stressed makes a difference in yield. The research indicates that stress between anthesis and silking appears to lengthen this stage of corn development and reduce the number of kernels per ear, about one gram per ear. While losing a gram of corn may seem insignificant, it can add up rapidly.

Swanton said losing just one gram of corn per plant can make a difference of 37 fewer bushels per acre based upon the observed scenario of all the plants growing at a rate of 4.5 grams per day and a reduction of yield of 20%.

Swanton’s research showed that weed-free fields yielded 563 kernels. Fields where weeds were removed at four leaf tips yielded 4% less and ears had 531 kernels, a 6% reduction. At eight tips, the yield went down by 20% and the kernel count was 491, a reduction of 13%.

Swanton said the research helps to explain why early season weed control is so important, and the concepts of critical periods and weed thresholds, plus the speed an irreversibility of yield loss. When considering plant “conversations,” it may seem like no-till management would be a bad idea. Why stress out the crop by letting plants grow around it? But Swanton said as long as farmers kill off the cover before planting, that’s okay.

Also interesting, Swanton said crops distinguish between weeds and plants like themselves.

“Soybean plants can recognize another soybean plant from weeds,” he said.

Calling it “sibling recognition,” Swanton said soybeans of a different variety are treated as part of the “family” but a different, wanted crop planted close enough is treated like a weed. Once plants reach a level of maturity, the presence of weeds isn’t as detrimental to crops.