Take care of what’s paid for 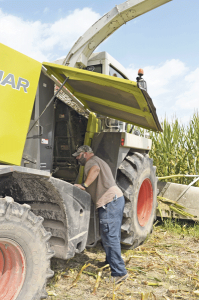 By the time a farmer begins to harvest corn silage, there’s already a significant investment in what’s coming in from the field. Expenses including seed, fertilizer, inoculant and plastic and the many hours spent planting, harvesting, packing and covering are either paid or will be paid shortly after harvest.

Dr. Hugo Ramirez, assistant professor at Iowa State University, said silage is an investment, and if it’s handled properly at the end of the season, that investment is protected and animals benefit from high feed quality. Ramirez said silage should be considered as part of a risk management program, whether it’s fed to dairy cattle, beef cows, or in a feedlot.

Risk management relative to silage is directly tied to a biological process – the anaerobic, or oxygen-free fermentation of sugars that will be converted to propionic, acetic and lactic acids. “The main driver of fermentation is lactic acid,” said Ramirez. “Sugars come from the plant, and bacteria also come from plants.” As corn is cut sugars are oxidized releasing water, CO2 and heat during respiration. Initial fermentation begins, but without inoculant, fermentation can be unpredictable and lengthy.

Ramirez said using an inoculant can shorten the time it takes for silage to go from pH 6 to pH 4. “Instead of losing forage over 21 days, when we use inoculant to speed up the process, we shorten the window to about 15 to 17 days,” he said. “That’s going to be savings down the road.”

One of the most critical points in silage harvest is assessing dry matter content. Ramirez said the rule of thumb is 35% dry matter, but acceptable levels vary from 32% to 35%. “Depending on how good the harvest machine is, we can go all the way up to 36% or 38% dry matter, but that requires more expertise,” he said. “For those harvesting BMR corn, the recommendation is 30% to 34%. The reason for BMR being on the wetter side is because the stalk is fluffier and more porous, and we need to be able to pack it down.”

Although some farmers are forced to harvest at less than ideal maturity due to time constraints, weather, custom operator availability or other factors, ideal harvest timing is scheduled according to grain maturity. “In the field, we can do this based on milk line,” said Ramirez. “The milk line is the transformation to the liquid stage to the solid stage when starch will be deposited in the grain. The milk line moves from the outside down toward the cob.” 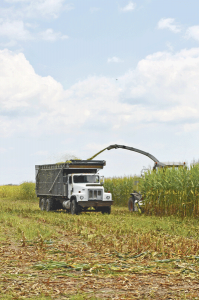 Ramirez recommends against basing harvest timing on the milk line when color is changing within the kernel, and suggests pressing a thumbnail into the kernel or biting into the kernel to identify the soft/hard divide. “We want that to be 2/3 to 3/4 down the milk line,” said Ramirez. “This recommendation is very important for those hybrids that have the stay-green trait. Those hybrids stay green for a much longer time and don’t mature at the same rate as the ear. If you’re waiting for the plant to dry down to 35%, by the time the plant dries down to that level, the ear will probably be fully developed and the kernel will be almost reaching black line.”

Because harvest time varies from year to year, Ramirez suggests sampling and comparing dry matter to determine dry down rate per day, then determining when to harvest based on those results.

Farmers strive to preserve dry matter content at harvest, thus increasing starch content. “We’re chasing after starch, said Ramirez, “so we wait for the corn to be a little drier so we can capture more of that highly energetic starch in the kernel. At the same time, neutral detergent fiber (NDF) content has come down, probably due to hybrid selection.” Ramirez added that as BMR corn silage has increased in popularity, the result is drier corn and more starch.

Chop length is a critical factor in harvest. Research shows that short particle length doesn’t stimulate the rumen sufficiently and can result in health issues. If corn will be harvested without a kernel processor, particle size should be smaller; about 1/4 to 1/2 inch. If kernels will be processed, particle length should be about 3/4 inch.

Two factors are key to good kernel processing. “The rollers are set with a narrow gap (1 to 3 mm) so everything that goes through is smashed to little pieces,” said Ramirez. “For most of the hybrids, 2 mm would be a safe setting.”

During processing, each of the rollers operates at a different speed, resulting in greater crushing action. Ramirez said there should be very few whole kernels after crushing, and crushed kernels should be no larger than half their original size. Although kernel processing slows down field operations, the effort pays off with increased dry matter intake.

If a custom crew is handling harvest, trucks may be arriving one after the other, but the key is to pack layers that are four to five inches. “Otherwise, the weight of the tractor doesn’t transfer to the bottom and we have air pockets even though we think we’re doing a good job packing,” said Ramirez. “Set the push blade at about five inches to achieve the correct layers.”

Ramirez reminds producers that the feed coming in is already paid for, so maintaining quality is critical. As long as silage is uncovered, plants continue to respire, resulting in aerobic spoilage and loss of nutrients. Although plastic film for covering silage was introduced in the 1950s, Ramierz said too many silage piles are still uncovered, and that dry matter losses in the top three feet of an uncovered pile can add up to 40% to 60% of material.

Without proper cover, a layer of spoilage will quickly develop along with the risk of mycotoxins. Oxygen barriers are specifically designed 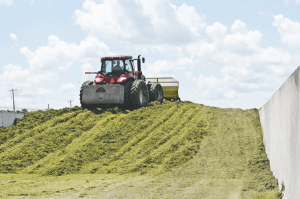 plastics that prevent oxygen from penetrating the forage mass. The oxygen barrier is placed first, then topped with black and white plastic, and tires are placed on top to further secure the plastic and exclude oxygen.

Improper or incomplete covering means increased labor to remove spoiled material. “Every time we put a pitchfork in there, we’re throwing money away,” said Ramirez. “It’s important to maintain an anaerobic environment from the bottom to the top to ensure we protect our investment and have enough good quality feed.”