World Dairy Expo is the premier place for all things dairy. The best of the best converge in Madison, WI, and this year, SUNY Cobleskill students were among the top in the Post-Secondary Dairy Judging Contest, placing third overall.

This year, the team of four students, coached by professor Carrie Edsall, practiced hard to compete successfully. The team was made up of Erin Curtis, Tesika Kilmer, Abigail Hatch and Emily Hatch. 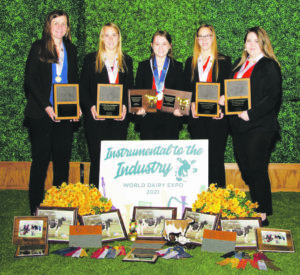 The colored shavings of WDE are nothing new to Edsall. Edsall grew up judging dairy cattle across the country and has coached the SUNY Cobleskill team since 2015, being top five every year, including the 2017, 2018 and 2019 WDE winning teams. “It was really exciting to be back,” Edsall said. “I love to see it [WDE] through the eyes of the students who had never been there before.”

Months of preparation go into being able to compete at this level. The team spent lots of time looking at cattle and also competed in the judging contest at the All-American Dairy Expo in Harrisburg, PA, where they won also. “I was really nervous,” Curtis said. “At Harrisburg it was pretty tough and at Expo it’s even tougher because all the cows are really good and it’s so hard to pick them apart.”

In the competition, the team judged 12 classes and gave five reasons for why they placed classes the way they did. “You’ve got to go in feeling confident,” Edsall said. “You prime them for what we’re looking for in the ideal dairy cow, but the officials might see something different. But for expectations – I just want to go in confident with them, that’s my big thing. When the students leave me to go judge, it’s in their hands. There’s nothing more I can do from that point. So I just hope that we’ve given them enough advice and experience to get in there and place those cows.”

As a result of their work, Cobleskill team members emerged victorious:

The team also had several high placings in the individual breed classes.

Curtis said, “I didn’t believe that it [winning] could happen. They went through top 10 for placings and I placed third – and I was extremely happy with that. Then they went through reasons… when they said my name for reasons and then overall, I felt relieved.”

Curtis, who is from Cazenovia, NY, is a sophomore majoring in animal science. She grew up on her family farm with Ayrshires, competing in 4-H and FFA dairy judging. She explained how grateful she is for her coach’s guidance and knowledge, and for making her “more confident, and calm and relieved.”

“She worked really hard,” Edsall said of Curtis’s accomplishments. “She put in a lot of effort behind the scenes, constantly asking me questions to improve her reasons, and she had just a great day of matching her placing with the officials. She was my first to win in both reasons and placings, to be top individual, so that was really neat. That made it four years of having top individual.”

Edsall also praised WDE: “Expo did a really great job of getting us back to normal – it was a wonderful banquet and great farm visits.” The team was able to go on tours around Wisconsin, which gave them the opportunity to see different breeds, different farms and see new farm management styles.

Students who wish to compete on the Dairy Judging Team first have to take the Dairy Cattle Judging class. This class begins in the spring semester, when students learn to identify and justify what they think is the ideal dairy cow.

The biggest difference, and challenge, between this year and in the past, Edsall explained, was that students only learned how to judge in the classroom, using videos, pictures and the SUNY Cobleskill cows, which only gave students the chance to see Holsteins in person, unlike in the past when they were able to tour farms and see a variety of cows.

“It was hard with COVID. We weren’t allowed to go to farms to see actual show cows like what we were going to see at the competition,” Curtis said. “So we watched a lot of online videos…and the college cows… It was really tough to learn from that and then go see show cows versus free-stall cows.”

While learning to judge in that way wasn’t ideal, “it did kind of show that because we worked really hard on our reasons, that brought us to the point of winning reasons at World Dairy Expo, because that’s where we were able to put a lot of focus,” Edsall said. “Winning reasons was a first for me, for my teams. While we did not win overall, we won reasons, which was a huge highlight!”