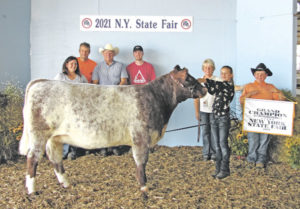 Brenda Bippert is a fixture in the Great New York State Fair’s Beef Barn, helping to direct traffic through the series of shows that take place during the fair’s run. This year, however, some of the stars of the shows were her grandchildren.

Makayla Sugg, 11, and Colten Sugg, 9, took to the showring in multiple classes and breeds this year. They are the next generation coming up at WBB Farm in Alden, NY, owned by their grandparents, Brenda and Warren Bippert Jr. The farm was established in 1946 by Edward Bippert with a small herd of Angus; Brenda and Warren Jr. added Herefords in 2005; and now fifth generation family members Makayla and Colten have helped expand the herd with even more offerings.

“We started showing our Angus and Hereford and then we added Shorthorn and Charolais,” Colten explained.

Makayla said that showing has always been a family affair. “We started showing when we were three. And now we’re stepping up our game.”

Both youths are heavily involved in the 4-H program in Genesee County, and in addition to working with their cattle they also work with pigs and sheep. They keep active – Makayla wants to train to eventually compete on “American Ninja Warrior” and Colten plays hockey. When it comes to their cows, though, they know exactly what they like.

“I had a gut feeling for my first cow – I knew she was the one,” Makayla said.

Colten wasn’t quite as lucky. “I picked out a cow I liked, but she didn’t like me,” he joked. “She threw me into a gate. We’ve had some experiences.”

The Shorthorn breed is Makayla’s favorite, and she plans on taking her Grand Champion Female from the NYS Fair to Shorthorn Nationals in Missouri and the Keystone International Livestock Exposition (KILE). “We’re getting very competitive,” she grinned.

The Hereford breed is Colten’s go-to, although he did well with his Charolais at the fair this year.

All the prize money the Suggs earn goes toward either future entry fees or their future college funds. They also participate in 4-H auctions, and Makayla noted that this year she earned $10 a pound for the cow that was auctioned on her birthday. It’s how she was able to buy her two Shorthorns.

As for the future, they already have plans laid down. Makayla has a goal of becoming a butcher, and Colten wants to learn how to weld. They were both enthusiastic about one day taking over the family farm too. Keep an eye on the Suggs that show – they’re going places.