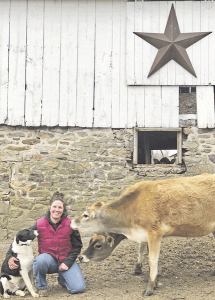 In a time when dairy farming is tenuous at best, a relatively new dairy farmer in Stockton, NJ, is looking toward the future.

Heidi Kovacs grew up on a generational dairy farm, but the farm was sold and the family moved off it in the late 1980s. Her father started raising beef cattle, and Kovacs helped on the new farm during the summer.

Although Kovacs has always liked cows, her goal wasn’t to become a farmer. After helping a struggling newborn beef calf get a good start, she decided she wanted a Jersey heifer calf for her 21st birthday.

“After I got her, I bought another calf,” Kovacs said. “I bought more Jersey calves when I could afford to, and figured if I could grow my herd that way, it would be a lot cheaper.” Kovacs’s fledgling Jersey herd, the start of Sugar Maple Jerseys, was housed in a barn and on pasture at the beef farm.

When Kovacs decided it was time to learn more about dairy farming, including how to milk cows, she arranged to spend time at a friend’s farm. For several years, Kovacs had a succession of jobs in the industry, including caring for show cattle and serving as herdsman.

Although most beginning farmers start with detailed plans, Kovacs began with only a strong desire to become a successful dairy farmer. As she accumulated more young animals, she realized she needed a plan. “What was I going to do with them?” she said. “I decided it would be a good idea to buy a herd and milk my own cows.” 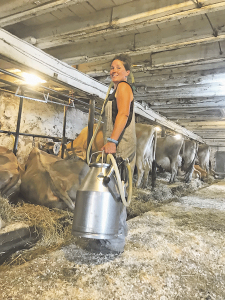 In June 2013, Kovacs found a small Jersey herd for sale. She knew she’d need a facility with at least a workable milking system, and initiated a loan application for what she’d need – including new milking equipment. When the paperwork took longer than expected, Kovacs assumed she’d lost the opportunity to purchase that herd, but the dairy farmer had saved the cows for her. “He brought the cows to me himself,” she said. “I still have a lot of that herd still with me.”

Kovacs quickly found that managing her own herd was different from managing someone else’s. “I love cows and love working with them, but what was left out of the equation when I got my own cows was paying feed and other bills,” she said. “I wasn’t the one in charge of forages before, and now I have a nutritionist.”

The first summer, the cows were mostly on pasture, and Kovacs purchased supplemental silage from her father. Now she grows most of her own crops and purchases baleage from her father. From March and November, the cows are only inside at milking time. “They’re primarily grass-fed,” she said. “They have a pasture and a loafing shed. I try to have the cows out and grazing now that the grass is coming in. Between November and February, or if it’s really cold and icy, they stay inside at night.”

The herd is managed in a rotational grazing system. The grazing season begins with spring oats, then onto perennial grasses. Sorghum sudangrass is ready for warmer weather, and annual grasses keep the cows moving through paddocks. “I was doing intensive rotational grazing,” Kovacs said, “but with doing more cheese, farmers markets, a farm store and online sales, I don’t have time to move the graze line.”

When Kovacs was managing other herds, she learned how to do A.I. through Select Sires. Today, she handles the A.I. for her own registered herd and selects sires primarily for production and type, with the goal of producing a sturdy dairy cow. A home-raised bull is used to breed heifers. 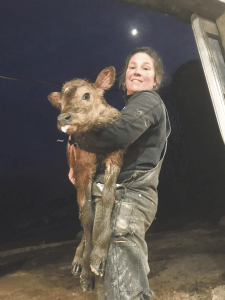 Today, Kovacs is milking about 40 cows and raising 30 replacements. She sends 400 gallons of milk every other week to a Pennsylvania cheesemaker. Some milk is used for soap, and the remaining milk is sold to DFA. Kovacs also relies on a custom processor to handle meat products. Her goal is to always have a plan for when the milk check isn’t going to pay the bills, which was the impetus behind cheese-making and other enterprises.

“It’s always something new for me,” Kovacs said. “I don’t settle into ‘let’s make some cheddar.’ Between new products and trying different markets – anything I can think of – I never stop at whatever is good enough for today.”

Kovacs and her partner Rick Denbigh, an experienced crop farmer, are currently in the process of working toward farm ownership. Although the herd is already primarily grass-fed, she is considering working toward a 100% grass-fed herd, and plans to add A2 testing to her protocol.

“I still grow,” said Kovacs. “It’s still tough – bills need to be paid – but then I think about the cheese inventory I’ve developed because cheese has to be aged. I have to put money out before I see a return, then it goes slowly. I start with big blocks of cheese and sell little blocks. But I’m able to slowly invest and grow the business, pay off loans and move forward.”