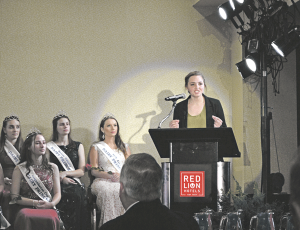 Being a veteran of scholarship pageants since 1965, the 63rd Pennsylvania Dairy Princess Coronation was its usual spectator treat. What got me started in pageant-watching in the first place: I was dating a girl in 1965 who wanted to enter the Miss Pennsylvania Pageant, the next step to the Miss America Pageant. We were in theater together and were between gigs when she decided to do this. She won the Miss Pennsylvania title, part of which was due to winning the talent portion of the pageant with a monologue from “Joan of Arc,” and went on to Atlantic City for Miss America.

It was back then that I began to study the quirks and foibles of pageant entries, a nearly odds-making process of who was likeliest to win this contest or that. It is easy to liken it to a horse race. I can speak truthfully about that because I visited a horse training ranch on the outskirts of Pittsburgh several years ago. The trainer had a horse in that year’s Kentucky Derby and showed us the video of how his horse just seemed to fade. The video showed what looked like a misstep as his horse was coming up from behind on the outside. He said, “Watch, right here,” and with that his horse did slightly drop back again. “He stepped on something, I know he did” was his analysis.

At the press table this year were former Dairy Princess winners – Carly Foos and the Wassons – Halee and Heather (an alternate dairy princess). The Wassons’ grandfather used to deliver milk to my wife’s parents when she was a kid in Centre County. Foos was working on category winners and Halee and Heather were photographing princesses for Pennsylvania Dairy Princess & Promotion Services. These women are part of an alliance of former winners. They can coach and advise other princesses, make suggestions, etc. Their insights are interesting.

What I look for in a princess entrant is what I call that certain something – something that makes them stand out, meriting a second look, sort of like picking the winning horse based on the colors of the jockey’s silks. It could be good looks, or a high energy level, or even some indefinable quality I never seem to put a finger on. For example, this year one of the entrants who sat in the back row wore a red gown which stood out. She was among those who received mentions for Best This or That awarded prior to the actual competition and turned out to be one of the three finalists, Denae Hershberger.

Pageant emcee Kirk Sattazahn called one of the Speech winners, Paige Peiffer, to take the stage to talk about “The Fight for Whole Milk.” Her speech was well-inflected and sincere, both of which worked in her favor. At such times, the judges write notes more decisively, and applause was enthusiastic. Peiffer was another finalist (one of seven), and so was Vannika Rice. 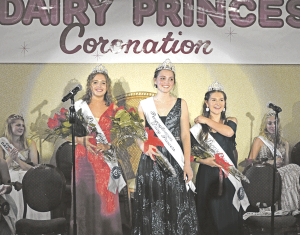 Sattazahn asked each finalist a question: “Who is your mentor? And what qualities do you admire about them?” Laurel Fogelman answered, “My mentor is actually a woman that I met at the Dairy Princess seminar this summer, and that happens to be Mrs. Nina Redding. I absolutely adore her for her passion for agriculture, and not only for agriculture, but for the dairy industry as a whole. She truly resonates with every single farm woman everywhere – that we believe in ourselves. She believes in herself more than anything. Just being in a room with her lights up your soul. She truly is preaching that in order to educate the future agriculturist, we need to educate the youth. That is something that I also believe in.” Nina Redding is the wife of Pennsylvania Secretary of Agriculture Russell Redding, who said afterward, “I’m sorry she wasn’t here to hear that.”

Alice Hoover answered the question this way: “My mentor that has been with me for all my life is my father.” Tears sprang to her eyes. “He works hard every day of his life, he does it for our family, and sometimes I don’t see him but I know he does what’s best for us.” Another line or two about his treatment of his cows and family were semi-lost in tears. The audience empathized with her and showed it in their applause.

Peiffer responded that her mom was her mentor and gave the reasons. Her applause almost mirrored Hoover’s, but there was a difference. Though the impact was the same, there was no empathy involved; it was a respectful applause. When I heard it, I said, “She’s the winner,” and that observation was based in part on her other achievements during that evening.

Outgoing Pennsylvania Dairy Princess Brooke Emery, when asked if she would do this again, said, “In a heartbeat.”