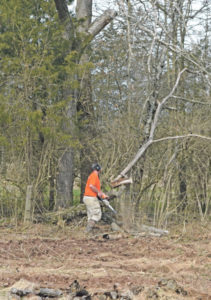 It doesn’t take long for undesirable species to choke out unused pastures. The easy fix is herbicides, but managing them mechanically is sometimes a better option.

Overgrown fence lines invite a plethora of pollinators, including monarch butterflies, hummingbirds, bats, ants, salamanders, beetles, bees – any living species that transports pollen from one source to another. While all pollinators play a role in successful crops, bees get a lot of attention.

Kelly Rourke of Pollinator Partnership said there are about 4,000 bee species in North America. There’s no question that pollinators are in decline, but Rourke said there’s no single reason.

Loss of pasture or habitat is one reason for the loss of pollinators, as well as development and urban sprawl. Another factor is the subtle influence of climate change that results in mismatches between flower bloom time and the lifecycles of pollinators. Pesticide misuse also destroys pollinators, both directly or indirectly, but farmers are becoming more aware of this issue and use caution when using such products.

Animal pollination is critical to the food supply. “Ninety percent of the world’s flowering plants need animal pollinators,” said Rourke. “Seeds and berries and plant material are needed by wild animals and provide essential ecosystem services for humans. The foods we rely on most rely on pollinators.”

Native plants are ideal for native bees, and especially important for specialist bees. Native plants suit bee diversity and are adapted to climate. Non-native and non-invasive plants can serve as forage and help supply the continuous bloom needed by bees.

“Pollinators forage in patches,” said Rourke. “Having patches of the same flowers makes it easy for them to get around and spend less energy foraging. Eliminating or reducing insecticides and having a mix of woody, herbaceous and grass species helps.”

Whenever possible, maintain pollinator habitat. Identify locations of existing habitat, especially where rare, endangered or remnant populations are present. Conduct vegetation inventories and use signage on road frontage areas to inform maintenance crews and the public that the area is critical pollinator habitat.

While bringing a pasture back to life, reduce mowing whenever possible. Managing pastures correctly should eliminate or almost eliminate the need for mowing. If possible, leave unmowed patches or strips to serve as pollinator refuge.

Mowing during spring, summer and early autumn should be done when it’s hot and sunny because that’s when pollinators are more active and can escape easily. A flushing bar placed on the front of the tractor allows adult pollinators to escape mower blades.

If hedgerows are completely cleared with the intent of revitalization, native plants can be used in hedgerows. Native species have deep root systems and help with water filtration. Although invasives such as multiflora rose are a food source, they should be removed to eliminate competition with more desirable species.

Rourke explained a case study involving the New York Power Authority (NYPA), which manages 1,200 miles of electrical transmission lines – the largest state-owned, right-of-way utility company in the U.S. “They developed a CPS-CIS integrated vegetation management program over a four-year treatment cycle,” she said. “In the fourth year, only undesirable species were spot-sprayed. Over 14 years and four treatment cycles, they found an overall reduction in undesirable species as well as a lower herbicide application rate, which has created an open, early successional community where pollinators thrive and where electricity is safely and reliably transmitted.”

Establishing pollinator habitat is one way to preserve numerous species while protecting soil under solar panels. Choose habitat carefully, using a diverse blend of species and establishing some in patches for pollinators that prefer to forage in one area. While turfgrass typically reaches three to six inches into the soil, native grasses and forbs often send roots as deep as four to six feet, which helps maintain a permanent structure that helps conserve moisture and inhibit runoff.

Potential site establishment challenges include the introduction of invasive species, some of which are harmful to livestock and become a major factor in weed management for vegetable and crop farms. Livestock and deer can be both detrimental and beneficial and must be managed to enhance and maintain native species stands.

Farmers who maintain hedgerows or vegetation along fence lines often find that growth has become unmanageable to the point of interfering with the function of electric fence systems. Some areas require clearing and reestablishment of desirable species. Where brush is heavy and overgrown, mechanical clearing is a better and usually more cost-effective method of reclaiming fence lines. This also helps reduce or completely eliminate the use of herbicides for brush and weed control.

Spring clearing and preparation for grazing may include removing overgrowth near and within fence lines, cutting down trees and trimming branches that hang over fences. Many noxious, invasive weeds can appear quickly and populate an area in one season.

In cases of shared fence lines, work with neighbors to create a solution that will benefit both parties. This is particularly important when removing large tree limbs that may fall on a neighbor’s property and damage fences – theirs or yours. Check your state’s regulations for managing trees on property lines and for cutting large, overhanging branches.