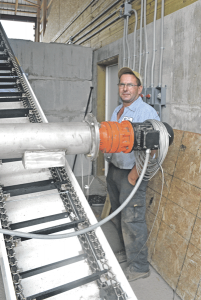 When the children of John and Bonnie Hess wanted to remain on the family’s JoBo Holstein Farm in Gettysburg, PA, part of the plan included the addition of a new 500-cow freestall barn. Today, several generations of the Hess family are working on the farm, milking more than 900 cows, raising crops and caring for young stock.

That freestall barn was constructed in 2007, and part of the project included switching from sawdust to sand bedding and a flush system to clean the barns. It takes a lot of sand to properly bed the cows, so reclaiming sand for bedding was the obvious choice. “We bed five times a week, and use around 25 triaxle loads of [reclaimed] sand a week,” said John Hess Jr. “I bring in just one triaxle load of new sand each week.”

In order to preserve as much sand as possible from the flush system, a series of settling lanes outside the barn allows sand to settle from the liquid portion of the flush water. Settled sand is collected, stored and reused. The remaining slurry is stored in two lagoons and is land-applied to 950 acres of cropland.

The Hesses have been pleased with benefits of sand bedding, and have noticed improvement in feet and legs, lying time, cow comfort and a consistently low SCC under 100,000. Frequent cleaning and the generous addition of sand followed by stall grooming keeps bedding clean and lofty, and provides inviting beds for resting cows. “We till the beds once or twice a week to keep the stalls full of sand,” Hess said. “We don’t want any holes.”

Since they started using sand, the Hesses have kept notes on improvements that would make the system better. “I’d like to see cleaner flush water and fewer solids going to the lagoons,” said Hess, who initiated a new and innovative sand reclamation system about four years ago. “We’ve never agitated the pits because we don’t want to make the flush water dirty.”

The more efficient sand reclamation system involves several components: a new building to house a solids separator, a composting unit and storage space for composted manure and a new sand settling system with pits adjacent to the building.

“We were dealing with too many solids in the manure,” said Hess. “We’re trying to get cleaner flush water and cleaner sand, and get more nutrients off the farm.” Hess added that the process will also result in about 20% more storage capacity in the existing lagoons because solids will now be eliminated.

Hess explained that with the new system, flushed material will start out in the same sand settling lanes, but the liquid and solid portions will be channeled to a system of tanks that will ultimately separate material into three components: liquid, sand and manure solids. 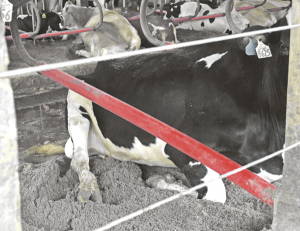 “Right now, everything goes to the first pit and then is pumped up to another pit,” said Hess. “Flushed material will still come out and start in the regular lane, but now, a smaller sand lane will direct material to a new pit with an agitator. Water and solids will come through, more sand will settle out and the liquid will be agitated.”

After most of the sand is settled out, the manure/liquid slurry will enter a screw press to remove any remaining liquid. After liquid is removed, manure solids will travel up a conveyer and fall into a composter, which turns the material into finished compost in 12 to 14 hours. Hess won’t have to deal with the compost – a contractor comes to the farm regularly to pick up finished compost, much of which will be bagged as a soil amendment.

Hess admitted that one downfall of sand is that it’s hard on equipment. “Sand wears everything out,” he said. “Previous to using sand, I never put a cutting edge on a skid loader bucket, but now I have three cutting edges in the shop waiting to be put on.”

The new process will preserve more sand and result in cleaner sand. “We’re pumping about 275,000 gallons of water a day to circulate for the flush,” said Hess. “We can never really clean out the lagoons because we have to keep water in them. In the closed loop flush system, we’ll flush out of the smaller tank and the lagoons will be just for storage.”

Another major benefit of the new system is that the entire manure management system on the farm will be contained in what Hess refers to as a “bowl.” “If a pipe breaks somewhere in the system, any manure will flow back to the system and be immediately contained,” he said.

Hess said he’s never been disappointed with the sand from the sand lane settling process, but the new system will have clear benefits. “We’ll have cleaner flush water, cleaner sand, the ability to agitate manure pits and move more nutrients off the farm,” he said.