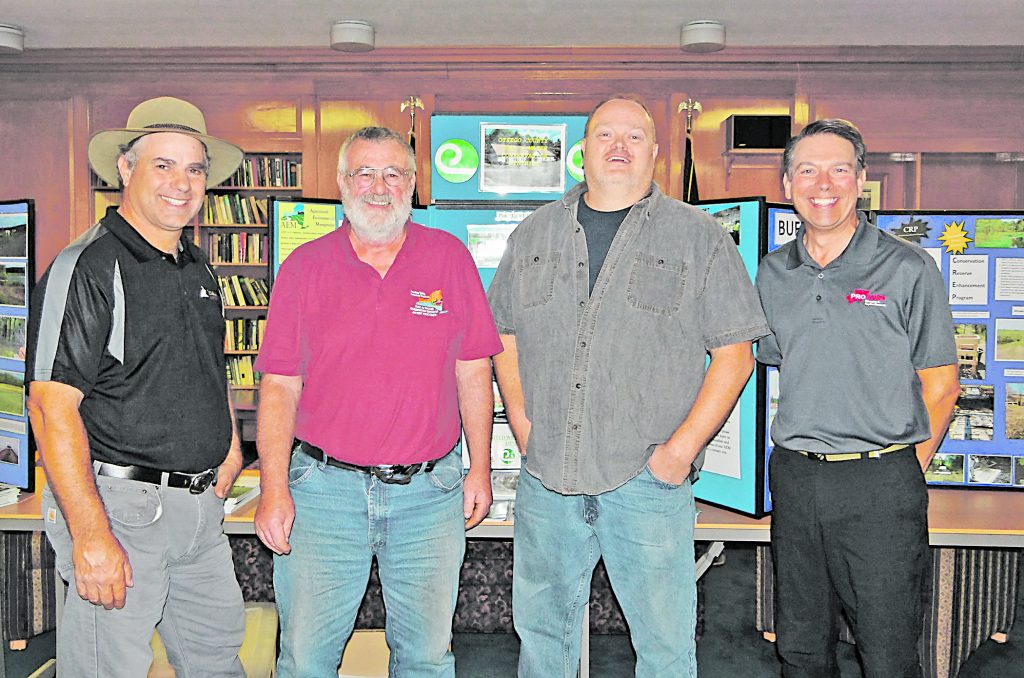 by Elizabeth A. Tomlin
“It’s those spur of the moment, on-site decisions that decide success or failure… and it’s a moving target… every day,” said Steve Groff, Cover Crops Coach and crop farmer of Holtwood, PA.
Groff, who had just returned from a consulting job in South Africa, has been contracted all around the world for training folks in the ‘how’ and ‘whys’ of cover cropping — and was on the roster of speakers for the Otsego County Soil and Water Conservation District (SWCD) 2018 Soil Health/ Cover Crop meeting held in Oneonta.
Soil health is impacted by cover cropping; “are you listening??”
That seemed to be the message at the SWCD meeting, where Karl Czymmeck, Department of Animal Science at Cornell University, presented a large amount of data recently complied that shows the impact of weather patterns and rainfall trends — and cover cropping impact on soil health.
Statistics and prediction of ‘rainfall trend’ is prompting ‘climate smart farming’ sessions all around New England, with larger and more intense storms in the forecast.
“When I think about soil health, it’s really about resilience,” said Czymmeck, explaining that soil health doesn’t need to be complicated. “The principals are really pretty simple.”
Czymmeck said, “Biological buffering is really important.”
What’s that mean? Soil needs to bounce back. (Just like we do.)
Ever had a bad day? Well, resiliency gives both us and soil the elasticity to rebound after being used and drained of nutrients.
Cover crops not only release nutrients into the soil, but biomass from cover crops breaks down, replenishing nutrients, while helping to retain moisture, reduce erosion and leeching out of nitrogen and run off — and loss of more nutrients.
“Contour strips that worked 40 years ago, no longer stabilize washouts,” explained Czymmeck, referring to the method that had worked successfully for erosion control in past years.
Farmers in attendance acknowledged that this was true.
“Topsoil is precious and should be protected,” said Czymmeck. “Soil organic matter is precious and should be protected. More soil organic matter is better — and we should try to increase it. Soil organic matter is key to resilient soil.”
Czymmeck says keeping the ground covered with living roots is critical.
“Think of the soil as a living thing,” commented an informed attendee.
Groff, who has won the ‘No-Till Legend Award’ from Frank Lessiter of the National No-Till Conference, agrees. “Do you treat your soil like you do your own body?” he asked. “What if you only ate four months of the year?”
As a life-long farmer, he says farmers will listen to another farmer and take their advice, while they may listen to a scientist, but put that information on a shelf.
“Regardless of how great a change in agricultural methods may sound, it will remain just a theory, collecting dust on a shelf, until the farmer commits to put it into practice.”
Groff is an advocate of no tillage and cover crops and has had a no-till farm for 25 years. He has led farmers in his area in an effort to reduce nutrient pollution in the Chesapeake Bay, where he reports fisherman are excited about the great improvements that have taken place since the movement has been in place to clean up the waters there.
He discussed different cover crops and success with inter-seeding, but realizes that every farm is different and soil requirements and environments vary. Added to that fact is every farmer has specific needs and goals; so, working with your local SWCD and Cornell extension agents will provide the best guide for individual farms.
Groff and Czymmeck both agree that basic soil health principles apply everywhere in the world. 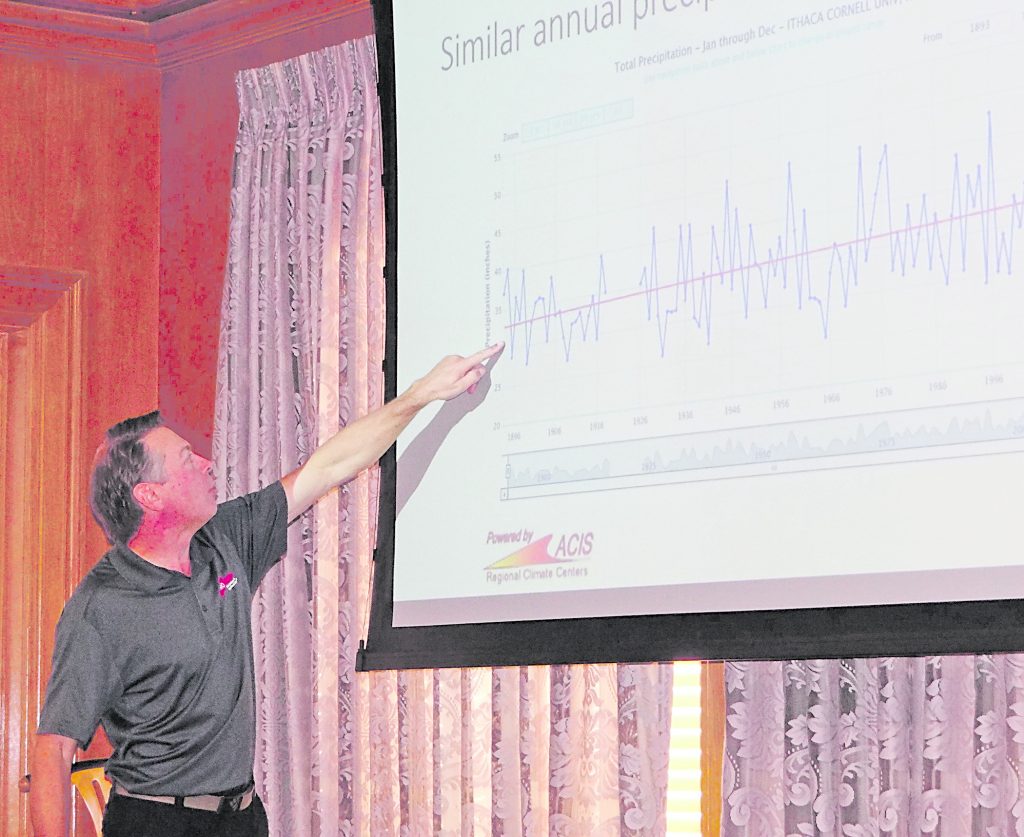 Steve Lorraine, District Manager for the Madison County Soil & Water Conservation District, reported on work done in Madison County, where the SWCD has been involved in a cover crop project for the past few years. Their projects involve grants accessed to provide a variety of farmers shared cover cropping equipment.
Lorraine discussed how costs and weather conditions have impacted the feasibility and struggle of implementing cover crops in CNY. He pointed out that hours, labor, fuel, seed and other expenses, discourage farmers — and many farmers would discontinue their cover crop program if not for the grants making it possible.
One problem with the program is that farms are disconnected in geographical location, causing financial drain and lost time in traveling from one farm to another across the county, when the equipment is in demand because of weather-related constraints.
Counties could possibly benefit by working together, sharing equipment when possible to aid farmers, who are otherwise unable to implement soil health building programs through cover cropping methods.
Lorraine said that when fields have been too muddy to get in with a seed planter, their crew has gone to broadcasting seed. “We bump up the seed and roll a tooth drum over it. If it’s not too muddy, it works great… recently, it has been too wet to roll the seed.”
“When cover crops reward the farmers for their investment, everybody wins,” acknowledged Groff. “Other beneficiaries include the neighbors, all those downstream, groups and agencies focused on environmental concerns and wildlife habitat, as well as those involved with the business and regulatory side of agriculture.”
And speaking of environmental concerns, Groff reports that public perception on stewardship of the land is becoming a big piece in this new puzzle as well, with big name companies such as Cargill, Wrangler, General Mills, Land ‘O Lakes, Campbell’s and even Phillip Morris, campaigning for better soil management so their crop-harvested goods can boast of being grown in ‘sustainable soils’.
“But it all starts with farmers being motivated and confident in their decision making about using cover crops as a routine part of his agronomic practices,” said Groff.
Bob Weaver, Otsego County SWCD Agricultural Environmental Management Contractor, and Soil Health meeting coordinator realizes that, “Farmers, like all people in business, worry about their economic bottom line, and paying their monthly bills.”
He says for an average farmer that can’t consider cover cropping, whatever the reason, soil management alone can still benefit soil health.
“Soil health will improve just by reducing conventional tillage practices,” commented Weaver. “Minimum tillage, strip tillage, zone tillage and ultimately no-till as the final goal.”
Weaver believes that farmers are beginning to realize that there are added financial benefits with cover crops, but he cautions to start out small, because everything tried may not work out.
“Try a few acres,” Weaver encouraged.
Work with trusted advisers and seed companies to minimize your risk.
“Just get started,” Czymmeck advised. “This is absolutely critical. Do something to improve your soil health. I don’t care what it is, just do something — and then keep building on it.”
“Invest one hour a week,” Groff emphasized. “Improve the soil for generations.”
“We need to be able to protect our soils,” summarized Czymmeck. “Our future depends on it.”
For more information contact weaverb@otsegosoilandwater.com.