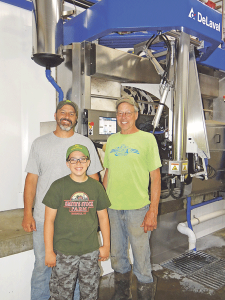 No signage directs you to Smith’s Stock Farms Inc., in Hornell, NY, where 11 DeLaval robotic milking systems (RMS) have recently been installed.

The farm, about 2,100 acres, was originally established in 1832 on 52 acres. Brothers Lowell and Dale Smith are current owners at the farm. Lowell’s son Aaron, along with Andrew Smith and Chris Passero, are slated as being future owners of the Steuben County dairy.

“We decided to go with robots because of the labor situation,” said seventh-generation dairyman Aaron Smith.

Smith’s began milking with 10 robots in April 2018 and added an additional robot last winter, with 11 robots milking nearly 600 Holsteins. The total herd is at about 1,200 head.

“We have four groups of cows here, and it took us about two weeks for each group, to train them when we initially started,” reported Lowell.

New heifers calving need to be trained as they calve.

“We have to fetch them to get them used to going through,” Lowell said. “As soon as they get a taste of the grain they are usually pretty astute about coming back.”

At Smith’s, the family is on-call to fill in as needed.

“We are what everyone calls a ‘small big farm,’” Aaron said, explaining that everyone in the family does a little bit of everything, every day.

“Chris is my brother-in-law, and he oversees the robots and cows on a daily basis,” explained Aaron. “My cousin Andrew, myself and Chris take turns on the night shift if there’s a problem with the robots.”

Chris and Andrew breed all the cows and heifers by AI. Andrew, Aaron and Lowell manage most of the field work.

“We also have a full-time guy, Brad, that has been feeding cows and heifers and maintaining the bunker for over 20 years,” said Aaron.

Andrew, Aaron and Brad haul all the slurry in the spring, summer and autumn. Aaron, Lowell and Dale take care of calves most of the time, with Aaron and Andrew filling in as needed.

A second full-time employee, Sarah Krenzer, has only been with the farm since the robots arrived. Krenzer, who studied to be a vet tech, helps with daily chores with the robots and cows, and also fills in with the calves.

Lowell explained that labor wasn’t the only reason the farm went to robotics. Other milking system updates were pending.

“Our prior milking system was a herringbone parlor and the original piece of that was put in place in 1967. We added to it twice. The last segment we added on to it started out as a double-6 and we wound up with a double-14. The last portion of it was kind of pieced together because they didn’t have parts that fit our parlor. But it was getting worn out,” Lowell reported.

When looking at the big picture, robotics seemed to be the answer. Construction for the new system began in June 2017. 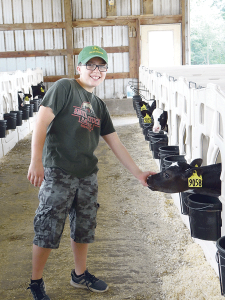 Lowell explained that the RMS is a “guided-flow system” that takes a “milk first, feed second” approach that pre-selects cows and sends them through a series of selection gates.

“These are finger gates and they’re one-way gates,” Lowell said. “They can come through to be milked, but they can’t leave until they go through the robot.”

Accurate records are created with the system, tracking the performance of each individual cow and sending alerts when a problem is detected – or even just suspected.

As expected, a dip in production occurred while the cows transitioned to the robotics.

Aaron agreed. “We have lost production and went from 90 pounds to 85 pounds,” he reported. “The two groups that are third-lactation old and older are well above a 100. The other two groups are mostly first- and second-lactation. When we get through the growing pains of robots we should easily get back to 90 – 95 pounds. Our butterfat and protein run the same as in a parlor: 3.8 butter fat and 3.0 protein.”

Somatic cell count has not changed since beginning the robotics and continues to stay below 150,000.

Aaron predicts that making milk is going to be tougher because of weather impacts on crops.

“Making milk this year is going to be a struggle,” he remarked, “seeing that we were two weeks late in cutting first-cutting because of the wet conditions – and a lot of alfalfa drowned or froze off from 2018’s wet year.”

“It was a miserable fall last year,” agreed Lowell. “We’ve taken a beating since last August.”

Aaron remarked that dump trucks and carts were used to get first cuttings off the field this year. “We bolted our floater tires on the dump trucks.”

Lowell said a tile-drainage system begun in 1969 has helped the farm. “We have probably 700,000 feet of sub-surface, systematic drainage now.”

“We did plant all of our acres,” Aaron conceded.

Aaron reported that the corn planted on their better ground was tasseling on July 24, while the last corn, late planted, was only about eight to 10 inches tall.

“Some fields that we rushed planting are very spotty; probably only 50% came out of the ground,” he figured. “New seedings finished the same day, show the same results. Better ground looks beautiful, while heavier soils have bare spots in them, either drowned out or washed away.” 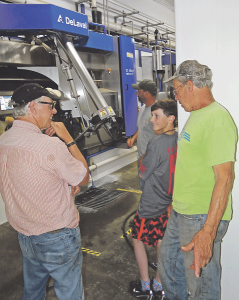 Aaron said the farm has no crop insurance at this time.

In a “normal” year crops consist of roughly 850 acres of corn and 800 acres of alfalfa-grass mix. Three hundred thirty acres are rented.

“We grow all dual-purpose corn because we still use high moisture corn. That gives us the option to combine or chop it,” Aaron said.

Although the farm has not seen herbicide resistance in their fields, Aaron said the field crew is concerned with keeping abreast of all current information. Bind weed, fox tail, wild carrot and ragweed are the weeds Aaron sees as most problematic in their fields.

Going to robotics has made a difference at Smith’s Stock Farm.

“I remember way back when we had 25 or 30 cows,” recalled Lowell. “I don’t remember when electricity came here. It was a few years before I arrived,” he laughed. “But it was all hand work before that.”

The new technology has helped Smith’s find an improved quality of life for themselves and the cows. Lowell points out the quiet and peaceful atmosphere in the barn, indicating content and happy cows.

“We had immigrants – and that works okay sometimes,” concluded Aaron. “But now the government wants to be in control of our business and minimum wage keeps going up. Now that the overtime rule is in effect, it was a no-brainer. Probably we will be seeing more robotics and smaller dairies exiting the industry now that New York has passed the 60-hour overtime regulation.”