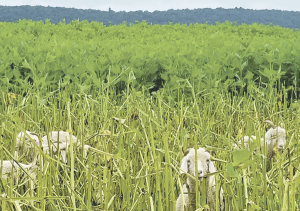 Whether you’re already grazing cattle and have marginal land or pastures needing improvement, or are seeking to graze smaller parcels of land and considering cattle, Ken Andries, small ruminant specialist at the University of Kentucky, encourages you to think about adding sheep and goats to your operation.

Llamas and alpacas are also considered small ruminants, and all of these animals have the same digestive system as cows. The difference is the size of the digestive tract, particularly in goats, whose tract is shorter and smaller than even that of sheep. This size difference means that forages pass through more quickly, and less nutrients are absorbed from the forage consumed. While goats require a higher quality forage because they don’t absorb nutrients as readily, they are quite content to get the nutrients they need from forages which other grazing animals prefer not to eat.

Goats are not only smaller than cattle, but they graze differently, and can be used on acreage too small for cows, on pasture that needs improvement and in systems where grazing marginal lands will enhance land utilization.

The market demand for goat meat exists throughout the U.S., and producers have yet to take advantage of it, failing to become any closer to meeting demand.

There is opportunity to utilize non-traditional lands for grazing goats without incurring much cost to do so. Producers can utilize marginal land that cattle can’t graze, can contract graze on utility right-of-ways or other public and private areas that need maintenance or improve existing cattle pastures which are weedy and require renovation.

“There’s a lot of areas that can benefit from goats,” he said.

Goats’ selective grazing ability means they will graze grasses and browse weedy forages relatively equally when given the choice. Cows prefer grass over browse by a much wider margin.

“I’ve never seen a cow be able to pluck the leaves off of a rose bush without getting a thorn,” Andries said, providing an example of the diversity of forages goats enjoy and which exist as undesirable on many pastures.

Small ruminants can be stocked at a higher carrying capacity, with three to five head of sheep or goats per acre of land. In comparison, cows require two to three acres per head. The fixed costs of pasturing the goat herd are divided among more animals, enhancing the per-head profitability.

But goats can’t simply be turned out onto subpar lands and expected to thrive. Grazing management is key to producing healthy animals, improving the land and profiting from pastured goat production.

Goats are happy to graze on standard pasture grasses, forbs and legumes in addition to browsing on multiflora rose, brambles and other undesirable plants. They will gladly consume corn in the dough stage, as well as other tall forages, although being prey animals, they don’t like to move into tall forages. Cutting pathways through the paddock will entice them into the forages and get them grazing, or planting smaller areas of taller forages can get them grazing as they feel secure. Goats tend to eat the browse first.

Predators are a concern with smaller animals, and sheep and goats are often targeted by coyotes. Fencing for goats is not the same as cows or even sheep. Goats don’t respect barbed wire, although high tensile fencing can work for perimeters. Electric netting or woven wire fencing with 12-inch-wide stays also will work well for goats. Goats tend to stick their heads through fencing if they can, so six- or eight-inch strands will cause them to get their heads stuck.

For temporary fencing, two or three strands of polywire with a stand off wire 18 to 20 inches off the ground to prevent the goats from rubbing on the fence is effective. Netting can be used but is heavy and difficult to move.

Keeping small ruminants from grazing too low also protects them from parasites. Roundworms are the primary concern. These nematodes hatch at soil level and climb the plants, typically not being found further than six inches up the stems. Rotating small ruminants out of pastures prior to 14 days will reduce parasite infestation rates.

Resting pastures for 120 days post-graze will also decrease the parasite load. Preventing low grazing will reduce the risk of consuming the worms, also leading to lower parasitic infection rates. As a rule, Andries recommends beginning to graze at eight to 10 inches in height, and moving the herd prior to the six-inch mark. That being said, goats will graze to the ground in spots anyway, but “when we keep that average grazing height up, we can reduce that exposure (to roundworms),” he said.

Proper rotational grazing will increase the quality and quantity of forage over time. When goats at the University of Kentucky were put either on a continuous grazing system or a seven-day rotationally grazed system with 56 days of rest, differences in pasture forage composition were seen. The fields were similar in composition of forages at the beginning of the informal evaluation process.

“We do see a little bit of difference in performance, and it’s usually better on our rotation. Remember I said that goats and sheep like a variety – they like some different things in their diet,” Andries said. “I see the rotation is maintaining the variation, even in the cool season forages.”

Co-species grazing opportunities, based on the differences in grazing pattern between sheep and goats versus cows, allows small ruminants to graze with cattle and to decrease the presence of brambles and weeds in cattle pastures. This increases pasture utilization and decreases the need for chemical sprays, enhancing profitability. Allowing one goat or sheep per cow does not decrease cow productivity, but will increase the quantity of pasture grasses as the weeds are browsed down.

Small ruminants will need more protection from predators and shelter for lambing and kidding, Andries said. Sheep cannot be exposed to copper, so mineral management for the cattle will need to reflect this.

“If you do not break even most years, and make a little profit sometimes, you are not going to be sustainable for the long-term,” Andries said. “Sustainability has to be economically viable.”

Adding small ruminants to an existing cattle system, on marginal lands or on small acreage parcels, can be a sustainable option. With market demand for goat meat, and the differences in grazing preferences, goats in particular can add value to existing grazing operations or be the animal of choice for new operations.