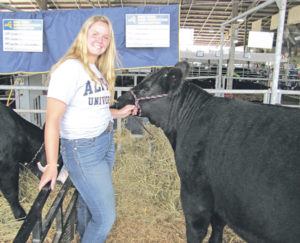 Just because a farm is small doesn’t mean it can’t produce champion beef cattle. Consider Ohisa Ridge Farm in Jordanville, NY. Owned by Stephen and Amy Hawkes, it covers about 20 acres and currently has just six head of cattle – but one of those cattle made it all the way to the “Sweet 16” of the New York State Supreme competition at the NYS Fair this summer.

“We are not a big show farm. We have three brood cows with their babies,” explained 15-year-old Laken Dyn, Amy’s daughter. Currently attending Richfield Springs High School, she plans on going to Cornell University to study animal science. She noted that because her parents both have full-time jobs off the farm, they mainly raise the beef cattle for themselves.

Laken said all their animals are bred and owned. She was bitten by the show bug after her older brother, Dylan Dyn, bought a Maintainer and began showing it. “I’ve been showing since I was eight, and my brother started showing when he was eight too,” she said. “Once I reached 4-H age, I knew I wanted to do it.”

She did very well at the Herkimer County Fair this year, winning Master Showman, Grand Supreme Champion Female, Pair of Calves and Best Two Head, among more, but was part of the NYS Supreme Show at the state fair because of her excellent showing at the Junior Livestock Show hosted by the Farmers’ Museum in Cooperstown. There, she earned the F. Ambrose Clark Livestock Cup for Best of Show in the beef, swine, sheep and meat goat categories with her Maintainer, HAS Kylie 527 (among other awards).

With nearly 60 entries in the Supreme show, Laken was invited back into the showring after being named one of the best in her earlier heat. Beforehand, she noted she was a little nervous about the competition, but that she was excited to be a part of it. (Ultimately, the winner was named James Hicks of Dutchess County.)

Her mom, Amy, said, “Laken works tirelessly with her animals. She spends hours each day in the barn and loves every minute of it. I am so excited that her hard work is paying off with the growing number of trophies and ribbons. Farming defines her, and I couldn’t be happier about that. I can’t wait to see where her love of agriculture takes her!”

Laken knows where it’s taking her. She said she aims to buy another cow with any prize money she earns.