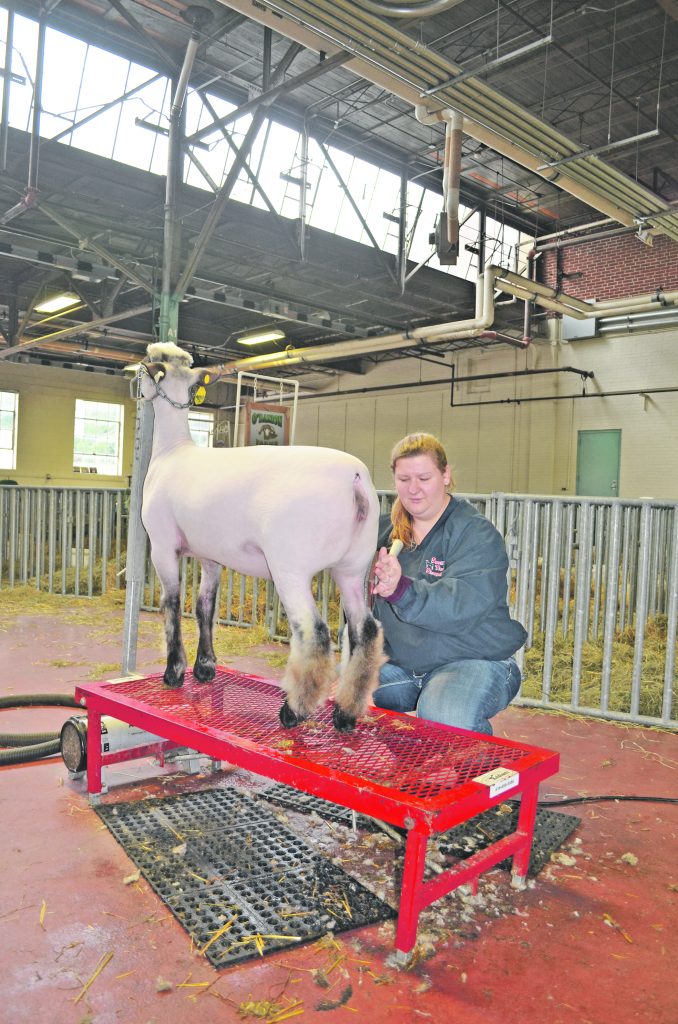 by Sally Colby
While many sheep exhibitors were washing, carding and trimming sheep prior to classes at the Keystone International Livestock Expo (KILE), held recently in Harrisburg, PA, one breed required almost no preparation at the venue. Shropshire sheep are slick-sheared prior to the show, arrive with almost no wool and need only some last-minute touch-ups prior to exhibition.
One Shropshire exhibitor at KILE was Denise Hardisky, who brought sheep from her Southern Tier Shropshires in Horseheads, NY. Hardisky isn’t new to the sheep industry – she grew up on a 120-head sheep farm and also raised 4-H market hogs and beef cattle. She and her twin sister Dana both became veterinarians and enjoy working in companion animal practices. They also enjoy coming home to their sheep.
Hardisky started using the Southern Tier prefix for her flock when she moved from Pennsylvania to New York in 2014. “We grew up showing under Rocky Meadows Farm,” she said. “My sister and I decided to lay that name to rest when we moved our flock in different directions. She’s now under Hardisky Club Lambs.”
After 17 years of raising Shropshires, Hardisky has seen some changes in the breed. “Shropshires have changed from a fitted breed to a slick-shorn breed, and now they’re one of the most popular breeds to show because of the easy show preparation,” she said, adding that Shropshires are a meat breed. “When we shear in spring, we use a 13-tooth comb. When we shear them for show, we use A2F blades [for slick shearing]. The sheep need to have less than an inch of fleece for me to use the A2Fs – if they have more than that, I’ll take the fleece off first, then go back over them.”
Shropshires headed for the show ring are slick-sheared less than seven days prior to the show. Finishing touches include last minute clean-up and light carding of the legs to enhance the breed’s blocky, solid appearance. With a class that includes only slick-shorn sheep to evaluate, a judge can see exactly what each animal looks like because there’s no way to disguise conformation faults with artful fitting.
As a conscientious breeder, Hardisky selects the best animals to raise as flock replacements or for sale as breeding stock. “Most ewes are marketed through purebred sales in Ohio,” she said. “That’s probably the most highly populated area of Shropshires.”
Hardisky’s show schedule begins with spring fairs, followed by her local county fair in August. She makes the trip to KILE in early October and often attends the North American International Livestock Exposition (NAILE), held in Louisville, KY, in November. “Most livestock shows will have a lot of Shropshire entries,” she said, adding that KILE attracts many exhibitors from Ohio. “There aren’t many places we go that there aren’t a lot of Shrops.” 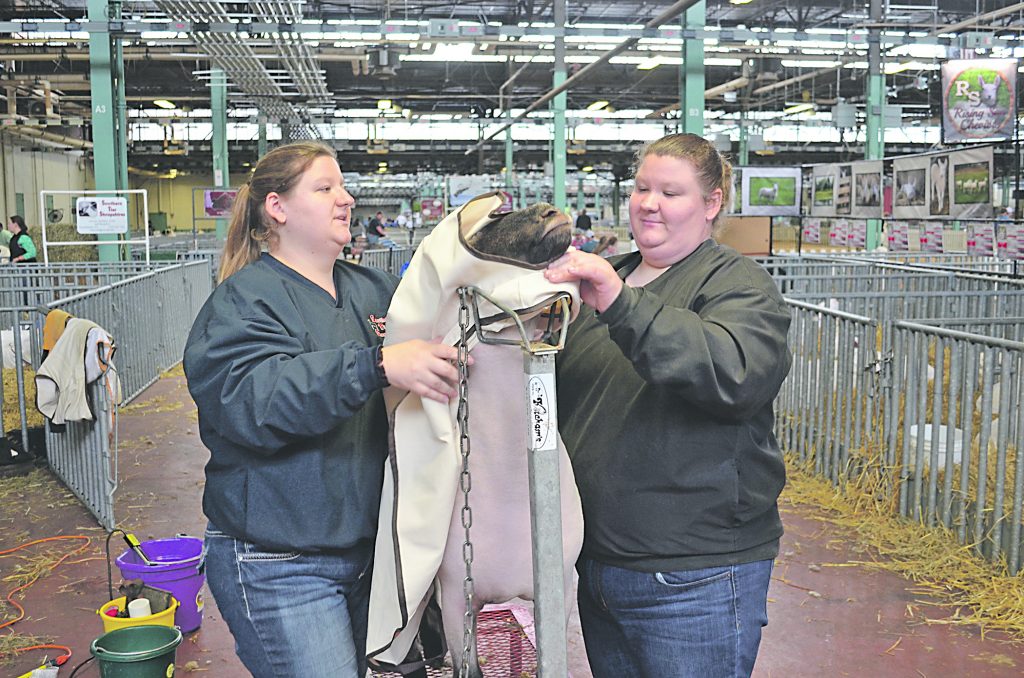 At home, Hardisky keeps the majority of her flock on pasture, with show animals housed inside for close monitoring. She designed a breeding program that allows for lambing twice a year. With the help of CIDRs (controlled intervaginal drug release) and PG-600, ewes are synchronized for estrous, resulting in more predictable lambing dates and uniform lamb crop. Rams join one group of ewes from August through October for spring lambs, and another ewe group is exposed to the ram in April for autumn lambs.
Hardisky said Shropshire ewes are good mothers and produce ample milk for lambs. When selecting replacements from among each season’s lambs, she looks for lambs that have come from the most productive ewe families. “I want them from dams that have produced well for me,” she said. “They should be type-y – they need to look like Shropshires, and should be conformationally sound with good feet and legs. They have to have a good rack, and I prefer a good disposition.”
Like other breeders who constantly seek to produce the most ideal representatives of the breed, Hardisky purchases both ewes and rams from other Shropshire breeders to diversify bloodlines. She said exhibiting sheep helps promote her flock and keeps her name in front of other breeders.
One important aspect of showing any livestock is maintaining healthy animals, and part of that is a good quarantine program for animals exposed to others of the same species at shows and sales. Hardisky observes her sheep carefully both at home and during shows, and separates show sheep from the rest of the flock after returning from a show.
“I’ve been doing this long enough that I know what to look for and what to stay away from,” said Hardisky, adding that she isn’t as concerned about bringing home disease as she used to be. “My biggest concern is shipping fever complex. You can bring home soremouth or pinkeye, but just be cognizant of your neighbors at the show.”
To ward off soremouth, which can be transmitted without visible signs of illness, Hardisky immunizes her flock with an autongenous soremouth vaccine, a custom-made vaccine formulated specifically to protect against particular strains of the soremouth virus. She said vaccinating for soremouth is worthwhile for sheep traveling to shows, but probably not economically worthwhile for most flocks since there’s so much variation in the virus.
As Hardisky prepared a young ewe lamb for the show, her sister Dana pitched in to help. Dana lives in northeast Pennsylvania, where she maintains about 75 Suffolk and Hampshire sheep for use as wether sires. Dana’s primary market is club lambs, most of which she sells directly from the farm.
When asked what the sheep industry should pay more attention to, Hardisky said that lamb is a good, lean meat, and it would be benefit the industry if consumers knew more about it. “I don’t think we market as well as the beef and pork industries,” she said. “We could do a better job with that. I’m in an area where farm-to-table is really important, but that takes time and effort.”