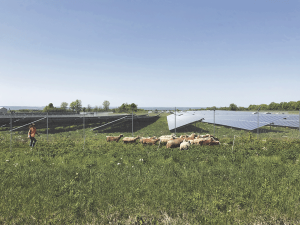 After growing up on an organic grazing dairy farm in Vermont, Lewis Fox pursued a degree in animal science at Cornell University. He graduated in 2014, worked on a dairy farm in western New York and then moved to central New York to work at a goat and sheep dairy.

“I always wanted to have my own business,” said Fox. “If I ended up going back to Vermont, part of the idea was I would be able to build a flock of sheep rather than stay in the dairy business.”

After gaining sufficient experience working with sheep, Fox was ready to invest in a flock of his own. “The lamb market is pretty good,” he said. “The northeast has been favorable for selling lamb and it’s a strong cash market. It isn’t that difficult to get into.” With a combination of savings and a loan, Fox started his enterprise with 120 sheep purchased from three flock dispersals.

Fox arranged to rent a vacant barn and pastures from a Cortland farmer, a partnership that proved to be valuable. In the spring of 2018, Fox’s plan was to graze his sheep and grow the flock. “That spring, I connected with Lexie Haines, the director of the American Solar Grazing Association,” said Fox. “She had gotten a contract to graze one of the solar arrays at Cornell University, but she didn’t have enough sheep. She asked if I wanted to split the contract and put sheep there.”

After the first year of grazing, Fox and Lexie Hain formed an LLC to create Agrivoltaic Solutions, now in its second season. “Last year we grazed seven sites,” said Fox. “We leased a couple of flocks too. At peak, we had about 400 sheep out.”

Fox says the first season went well. The animals thrived and there were no predator issues. “Most of the sites we do are ten to thirty acres,” said Fox. “We have a couple smaller sites – we can put a lot of sheep on those sites for a few days then move them.” Fox added that in the future, he’ll place a large number of sheep on a site to graze for a short period of time, then move them to another site. 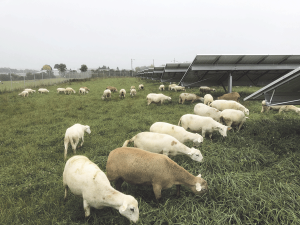 Fox talks to several companies a month who are interested in grazing sheep under solar panels. “Sheep work well for vegetation management,” he said. “From the perspective of the solar owner, sheep do a great job getting under the panels, which can be difficult to do with mowers. They’re the right size, they don’t chew on wiring and in our experience, haven’t damaged any equipment on the site. Sheep also eliminate the risk of mowers running into panels and causing damage.”

As Fox works with more companies interested in including sheep for vegetation management, he has found those companies are willing to design sites to be sheep-compatible. That might mean starting with planting a seed mix appropriate for grazing sheep.

“Sites not designed with sheep in mind typically work fine with sheep,” said Fox. “The main consideration we like to check out ahead of time is making sure there are no big gaps in the bottom of the exterior fence. But we haven’t had to modify any sites to make them sheep-friendly.”

To meet security requirements and energy codes, chain link fencing is the norm for solar installations. Fox prefers to see a tensioning wire at the bottom. Fences at some sites are topped with barbed wire, and one site has hot wire around the bottom to prevent coyotes from digging. When Fox visits sites to check sheep, he also makes sure all vegetation is under control in grazed areas and rarely has to do any additional maintenance. Electrical workers from the solar companies visit sites several times during the grazing season and signage at the gates directs workers to close gates when they enter and leave.

For those interested in having sheep under solar panels, Fox develops a comprehensive vegetation maintenance contract on a per-acre basis, “We guarantee that the grass stays below the leading edge of the panel so it doesn’t shade the panel,” said Fox. “We have the flexibility to adjust the stocking rate, move sheep on and off.”

Fox provides water and minerals at each site. Some sites are suitable for rotational grazing, and for those, Fox says electric polynet fencing or three strands of polywire works well. 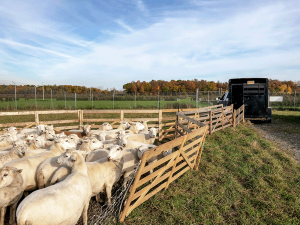 The ewes Fox chose for solar grazing are primarily Katahdins, with Texel rams as terminal sires. Ewes lamb in January and February, and lambs are weaned prior to the grazing season. After lambs are weaned, ewes graze from late April through October and are checked several times a week. Some lambs have been born on site, which requires more attention to rotation to avoid parasite issues. Rams are added in fall when ewes are still grazing to ensure early winter lambs.

Sheep gain well and maintain excellent condition on sites seeded in legume mixes. A well-managed grazing system for the length of the solar project will improve, not degrade soil quality. “Sheep are sized for solar,” said Fox. “I think grazing sheep can be a productive use of land. We see no loss in forage productivity on solar sites, and even see higher production through July and August when it’s hot and dry – the shade holds moisture better. If those sites are seeded well, they can produce a lot of forage.”

Fox says a well-managed production system on a solar site can produce a lot of dollar value per acre of meat and compete with other forms of agriculture and believes it’s possible for agriculture to co-exist with power production.

In areas where solar installations are controversial, Fox says the idea of sheep grazing might make the concept more appealing. “Solar grazing in the Northeast is in its infancy but we’re seeing it start to take off now,” he said. “I think developers realize they have to do everything possible to make it (solar) work for as much of the community as possible. It can be a hard sell, so we’re making it benefit them as much as possible.”