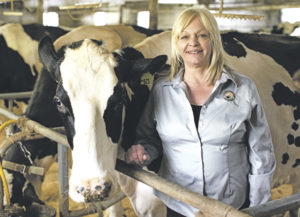 “When I was involved in the dairy princess program, we went to fairs and handed out trophies and ribbons,” she said. “As I was handing out ribbons, I saw a beautiful cow come into the ring. I watched and admired her all day. At the end of the day, she was grand champion and supreme champion. When I went to hand the trophy and ribbon to the guy on the halter, I discovered he wasn’t too bad either.”

That guy on the halter was Jeff Donahoe, who eventually became Audrey’s husband.

Although Audrey participated in 4-H, she didn’t show cattle prior to meeting Jeff. After the two started dating, Audrey purchased her first show calf and developed an interest in registered Holsteins. After completing her reign as Dairy Princess, Audrey remained involved, serving on the committee overseeing the program.

“Jeff and I have been in the industry our entire lives,” said Audrey. “We have primarily registered Holsteins and some registered Brown Swiss. We have about 200 head, including some beef animals, and milk 100 cows in a tie-stall barn.” Calves are also housed in the barn, with a special area for newborns and older calves once they’re drinking from a pail. Heifers and dry cows are housed in a coverall building. Pre-fresh cows are moved to the main barn about 10 to 14 days prior to calving to acclimate them to the barn and feed.

The Donahoes grow a variety of crops for a homegrown TMR including corn for silage, high-moisture corn, soybeans, barley and alfalfa hay. A purchased concentrate balances the ration. Soybeans are added to the TMR or sold as a commodity. Barley is grown for straw and is also used as a ration component for far-off dry cows or pre-fresh transition cows to help manage energy density in the ration and increase effective fiber for improved rumination and rumen fill.

Audrey’s continued dedication to the dairy industry helped lead her to her current role as president of the American Dairy Association North East. The organization represents almost 10,000 dairy farmers in New York, New Jersey, Pennsylvania, Delaware, Maryland and northern Virginia. “It’s fully funded by farmers and the board are all dairy farmers,” said Audrey. “Not only are we contributing to the program, we’re overseeing the program. It creates a nice balance.”

As she recalled her early role in dairy promotion, Audrey said she’s always believed promotion should be a big part of dairy farmers’ Checkoff. “Even back then, our primary focus was to promote the goodness of dairy products,” she said. “We shared our story about what we do on the farm and how we take care of our animals. I had that little bit of experience with the public, talking about what I do on my farm.”

Audrey said it’s still important to stress the fact that milk is a healthy, nutritious beverage, but today’s message also involves providing consumers with information about food production. Although some farmers haven’t always been willing to talk about what they do, farmers telling their own unique stories has become an important aspect of dairy promotion.

“There were groups who were telling the story of farmers and the dairy industry and they were not accurate stories,” said Audrey, explaining the switch that came with the advent of social media. “That’s when consumers started to raise questions, wondering if that’s how milk is actually produced. The evolving age of technology became so easy and was at everyone’s fingertips. Animal activists and others not in favor of the industry started telling those stories, and that’s when we needed to start telling our own stories because what they were telling was not at all accurate.”

The dairy industry’s response to negativity was to flood social media with dairy’s positive story. “Being on the defense and arguing with activists wasn’t accomplishing anything,” said Audrey. “We talk about what we do. There’s no one better than a dairy farmer to tell you how a farmer takes care of their animals.” Consumers in the middle who hadn’t made firm decisions on whether dairy farmers’ stories were true were satisfied when they began explaining their practices as well as talking about the positive benefits of dairy.

Audrey said the programs within ADA North East are strategic and comprehensive, centered on marketing dairy products. Although virtual dairy farm tours were already in the works, COVID forced a quick pivot in order for the organization to remain connected with schools and consumers. “The virtual dairy program exploded,” she said. “It has enabled us to develop a whole new program. Prior to the pandemic, kids going to a farm may have been impossible due to limited school funding. Now we have a program that’s available to all kids – they can see a farm virtually.” Thanks to the outstanding reach of virtual dairy farm visits, that program will continue.

Many programs are aimed at Gen Z, or “Zoomers,” a group that includes ages 6 to 24. “I want to see the program successfully connect with the Gen Zs,” said Audrey. “If we don’t connect with Gen Zs, we aren’t going to have consumers to buy our product and keep my farm going for another generation. If we can make a connection with a virtual tour when they’re in school then continue to keep that trust and connection, that generation is going to consume our product.”

“If we want to stay in business, we need to connect with people who are buying our product,” said Audrey. “If that’s what the consumer wants to hear or learn about, we need to pursue the train of thought ‘Yes, we will share with you what we do,’ and that builds trust so they’ll continue to buy our products.”