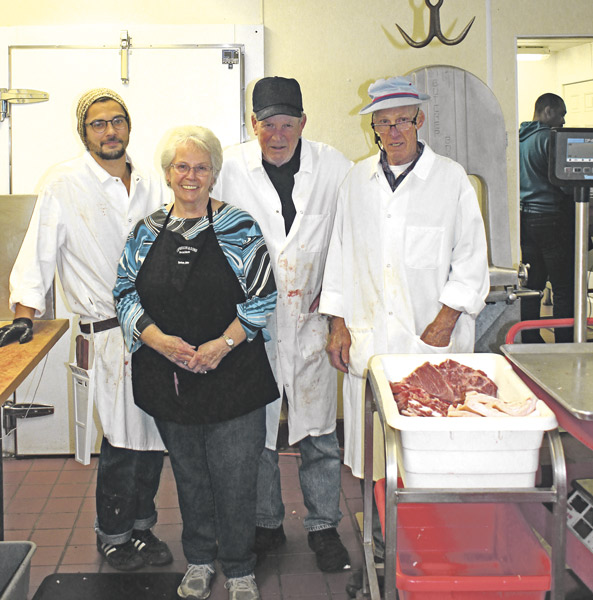 Andy Bisson’s favorite part of the day is the quiet of the morning, sipping his coffee and then heading out to the milking barn at 3 a.m. A third generation dairy and livestock farmer in Topsham, Maine, there is nothing Bisson would rather do.

“I like my mornings when nobody’s calling me on this,” said Bisson, pointing to a cell phone. “In the morning you gather your thoughts. The machinery is running and I’m just doing my thing. You probably could give me a million dollars and I wouldn’t be happier.”

Bisson has worked at the family farm with his 10 siblings since he was a kid. While other siblings went in different directions, he’s always worked at the farm, alongside two of his brothers and one sister, who each have their own roles and responsibilities.

The farm started in 1929 when his grandparents Arthur, originally from Quebec, and Odile saved up enough to buy the then-abandoned dairy they named Beechwood Farm Dairy. Arthur would milk the cows while still working at a local bakery at night, and Odile would deliver the milk.

The couple, who never needed to learned to speak English in the southern Maine French-Canadian enclave, eventually bought a slaughterhouse down the road and had it moved on site. They also bought up other small farms as they expanded. Both worked on the farm right until the end, by that time passing on the business to their son, Paul, who continued to expand and added a larger storefront he also had moved onsite. Paul and wife Lorraine renamed the business L&P Bisson and Sons LLC.

These days, Andy is in charge of the farm, dairy and slaughterhouse, buying and selling cattle and general repairs, while his brother Arthur manages the market and smokehouse. Brother Robert also works in the market, while sister Pricille Pollock keeps the books. Andy said they are beginning to pass things on to the next generation. His daughter Lorraine is learning the books and daughter Annda works in the market. He has a couple nephews who help on the farm, while Arthur’s son David works the smokehouse.

Even family who work “on the outside,” as Andy calls it, lend a hand when needed, including some skilled in welding. Andy, a self-taught mechanic, is skilled as well, rebuilding much of the dairy’s equipment, including antique bottling and butter machines. He’ll tell you about the deals he got them for, going along with the family philosophy of saving rather than going into debt, something his grandfather started, selling off apartment buildings he owned to pay off the farm, since holding loans didn’t sit well with him.

Today they keep 400 head of cows in the summer, cutting to about 300 in winter, with 80 of them in milking. Andy has expanded the dairy over the years and now produces both raw and pasteurized milk, cream and about 16,000 pounds of unpasteurized butter a year, packaged in a box with his grandparents’ and parents’ pictures on it. Currently, raw milk outsells their pasteurized.

The meat accounts for most of their business. Besides the beef, veal and the 50 – 100 pigs they raise on the farm, they also slaughter for other small farms and sell smoked meats. They originally contracted out to smoke, but Paul, tired of regulations, built a small smokehouse on the property and went all in.

When a family member asked if he was just going to smoke a few items, Paul said, “‘Nope. We’re going to fill it right up and if we mess up, we’ll mess up big time,’” Andy recalled with a chuckle. Arthur has since bought an even larger smokehouse. They’ve expanded their cooler space as well.

Their smoked chicken is a big selling item, especially in their Ma Bisson’s chicken pies. “We can’t keep ahead of the chicken pies,” said Andy, who noted they are still made with his mother’s recipe. They also make their own sausage and beef jerky, other big sellers.

They sell the meat in their store, along with the dairy and a few other grocery items they purchase to loyal local customers, some of whom will drive a couple hours. They also sell in other markets and a few restaurants, and some of Andy’s milk goes to a local cheesemaker. They’re working on the paperwork to sell at Hannaford Supermarkets.

COVID-19 has generally been good for business. The store is still closed to customers, but they continue to do a brisk curbside business, and had to install another phone line to keep up with orders. But they have suffered in finding employees since the pandemic hit. A few of their market workers left and have not returned. They currently have 20 employees (12 in the market and eight in the dairy), including a couple migrant workers they hired through a contracting company.

This summer’s drought impacted their second hay harvest, but they lucked out with the timing of corn. Bisson grows hay and corn on about 200 acres (the entire farm is 400) for themselves and will sell to other farms if they have extra.

One of the keys to their success, despite hardships, is the delegation of tasks and their family rule of not questioning each other’s areas of expertise.

“The way we run it and what my father always said was if you got something on your mind say it, and then that’s the end of it, drop it,” said Andy. “When we discussed stuff, no matter if we agreed or not, nobody overrode each other. And that’s why we’re still together today.”