Showing is a family affair 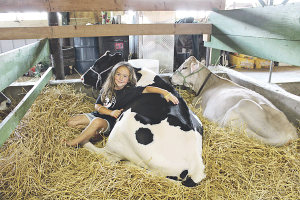 CANANDAIGUA, NY — For Blue Heaven Farm in Stanley, showing at regional livestock events is a family affair. Mom Brooke Smithling took her daughter Samantha, 5, son Emmett, 8, nieces Amy, 16 and Morgan 18, plus Megan Castano, 9, a 4-H friend, to the Ontario County Fair recently. Showing at events such as this provides a bonding experience for the family, as well as promotes the growing farm.

Blue Heaven Farm raises hay as its main money maker on 60 acres of land, but also owns 25 Brown Swiss heifers, 20 of which are ready to calve and are housed at Hilton Farms in Hopewell.

“We get the calf back and they milk our cow for us,” Smithling said. “We still have ownership; they board it for us and milk it.”

The profit from the milk covers the cost of boarding.

The Smithlings have three acres of pasture, mostly Timothy and clover, for the cows that live at their farm.

“We don’t want to compete with big-name farms but have our name out there that we have good Brown Swiss too,” Smithling said. “My husband is starting to buy embryos with good cows and we want to take them to bigger Brown Swiss sales. We’ve met several breeders in the industry to get advice from them.”

Kortney, her husband, grew up on a dairy farm. When they met, “I was hooked right away once he mentioned he had Brown Swiss,” she recalled.

The Smithlings faced a crossroads a few years ago when Kortney’s father passed away. Should they sell the herd or continue farming?

“I told my husband that there was no doubt that we would build a barn because this is how I wanted our children to be raised: to learn values that go into raising livestock and all the responsibility in taking care of them. The things you learn by raising animals are never-ending.”

Though it’s still a learning process for her, she enjoys educating her children on animal care and showing.

“It’s fun and at times challenging but I wouldn’t trade it for the world,” Smithling said. “My son just found out his heifer is pregnant with a heifer calf and his smile makes it worth it going out in the freezing cold every day all winter.”

In the Brown Swiss Junior Show, Emmet won Grand and Reserve Champion for Brown Swiss and First Place in his class. He also won first place in Open Showmanship. In 4-H, he came in 3rd in his Showmanship class.

Smithling felt particularly impressed that Emmett carried on even after his heifer became spooked and accidentally head butted him in the face.

The children have certainly picked up on their parents’ enthusiasm for animals and showing. Smithling said the day after the animals returned from the Ontario County Fair, Emmett asked, “When do we start walking them again to get them ready for the next fair?”

She added that some spectators at the fair wondered why the boy’s parents would allow him to handle such a large animal by himself. Smithling said ordinarily, they wouldn’t; however, his close bond with his cow made them feel comfortable with allowing Emmett to do so.

“They walk all over the dooryard and laneway and all over,” she said. “It’s great to see the bond they have together.”

Smithling co-operates a 4-H group with Lisa Grefragth, of Hopewell. Her parents own Hilton Farm. The duo decided three years ago that should start a group so that the fair would have more youth exhibitors. About 20 belong to their group and nine of those show dairy cows. 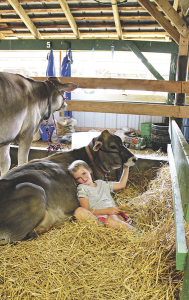 She recalled that when they began the group, they were told to start younger ones with rabbits and chickens — the usual “starter” animals for young exhibitors.

“I didn’t think we needed to go out and buy more animals,” Smithling said.

Since they already owned cows, they went with cows as exhibiting animals.

The Smithlings hope to continue to improve their farm’s genetics and build a stronger herd.

“We want to take them to fairs and do well and have the kids have something to show with that’s show worthy,” Smithling said.

They plan to show at the Wayne County Fair in Palmyra and the New York State Fair in Syracuse.

They skipped the Spring Dairy Carousel in Syracuse last spring, as it wasn’t good timing with either of Smithling’s workplaces. She teaches at Head Start and he works for Zimmerman Fertilizer. The couple is considering construction of a milking parlor, but “we’re tied down enough with the heifers,” Smithling said. “We consider our cows family. It would be nice to have them here.”

They also hope to market their farm more through an online presence instead of relying solely on word-of-mouth advertising.