Should you be concerned about Johne’s disease in your beef herd? 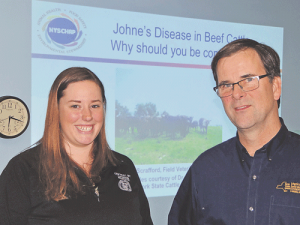 It’s silent right up until the end. Maybe you’ve been watching that animal, wondering why she is so thin. But, you see that she seems to be eating well. If she is sick, wouldn’t she be off her feed? Why does she continue to lose weight?

If you are thinking that Johne’s disease does not impact your beef herd, you are sadly mistaken.

During an in-depth and eye-opening discussion, Dr. Robert Scrafford, NYS Cattle Health Assurance Program (NYSCHAP) explained just how devastating this disease can be to your beef herd- even more so than in a dairy herd!

“Johne’s is a chronic, long term, progressive, bacterial infection,” remarked Scrafford. “However, you can’t treat this one.”

Strictly an intestinal disease, Johne’s occurs mostly in ruminants: cattle, sheep, goats, deer, elk and bison. It has also been found in llamas and alpacas.

Scrafford explained that intestines absorb nutrients through micro-villi fingers and are essential to life.

“What you’ll see, if you see disease, is diarrhea and weight loss — with good appetite.”

There are four acknowledged stages to the disease, with stage 4 recognized as “clinical.”

During clinical, stage 4, you will see “pancake batter diarrhea” (with bubbles) from animals that are obviously losing weight — but they keep eating. Reactions within the bloodstream cause edema to build up, resulting in a bottle-jaw appearance.

“Once you see clinical signs and you see diarrhea, they’re going to die. There’s no stopping it. There’s no turning it around.”

While you may only see one animal clinically infected, 20 or 25 others will be infected. 95-percent of cattle infected show no sign until reaching stage 4.

“No matter how they look, they are a constant source of new infection because they are shedding bacteria.”

It is important to recognize all four stages of the disease and understand this is a progressive disease.

During stage 1, the animals don’t test positive, but harbor bacteria within their intestines.

“Shedding starts in stage 2, but only occasionally, intermittently- and there’s no predicting it. Testing may not detect them. They can test positive once and not again. But, once they are infected, once we find the organism in the feces, that’s not a mistake. Don’t think they’re not shedding on your farm! They are!”

About 70 percent of animals stay at stage 2, while 30 percent progress to stage 3, shedding large numbers that can consistently be found in fecal testing.

During stage 4, animals are visibly declining and dying — and shed, literally, billions of bacteria daily.

Possibility of transmission is lower during stage 2, but does occur. Percentages advance with the progression of the disease. Transmission peaks during stages 3 and 4, with 40-percent of calves infected before birth. Cows that go “clinical” soon after calving have likely transferred the disease to their calf, so expect it. Calves infected have a significantly higher rate of progressing to stage 4.

“Manure is the biggest concern, but colostrum and milk become more of a concern — and in-utero transmission in stages 3 and 4.”

A case of one 14-month-old dairy heifer that went down with clinical Johne’s and no sign of the disease previously was discussed. A bucket loader used to scrape the barn and then used for feeding out silage was blamed for that contamination.

Johne’s has also been documented to have been cultured from pond water.

It takes a larger dose of bacteria to infect adult animals, as their immune system is already fully developed. When infected as adults, animals may never advance beyond stage 2.

“In modern dairy operations, Johne’s control is now standard operating procedure. What they do, is get the young stock away from adult manure after a clean birth. They get them a clean maternity pen, and that’s the last time the adult sees the calf. The faster, the better.”

Dairy calves are then fed Johne’s test-negative colostrum or colostrum replacer, then a clean milk source — milk replacer or pasteurized milk. Pasteurization will kill this bacteria. In organic dairies, they’re tested for Johne’s and use milk from test-negative cows. Although there is no guarantee those cows are not shedding, this method reduces the chance of calves picking up the disease.

On the other hand, this is not so in the beef industry.

With no separation of calves/ youngstock from adults, and crowding in with adults during winter months a normal procedure; raising beef is a risky business for Johne’s.

“Every risk for spreading Johne’s from infected shedding adults to uninfected, susceptible youngstock is present for months in our normal, well-managed, beef herds,” explained Scrafford.

A “thimble-full” of infected manure is all it takes to infect a calf. All manure is suspect!

Ignorance is not bliss.

“If you fail to recognize Johne’s infection and take positive action, you’re going to have more problems in the future.”

An example of worst case scenario was actually experienced by Scrafford, when a beef farm that had tested negative for Johne’s Disease over many years, brought in high-quality genetics with a bull and cow. Too late to be stopped, disaster hit.

That winter in the barn, the new animals experienced “diarrhea that just wouldn’t quit.” Johne’s had remained silent in the pair, until stress from the sale and moving into a new herd caused their immune system to be depressed enough so that the silent Johne’s emerged.

Twenty out of 25 head of cattle tested positive the following spring.

This not only impacted the buyer, but also the reputation of the previous owner.

What are the chances of keeping a thimble-full of adult manure out of the mouths of young stock that are with them 24/7, nursing every day until weaned?

“The key in beef, in my opinion, is testing and then management. Testing becomes a necessity to achieve real control. You have to know who is potentially shedding,” said Scrafford.

This means separate water, winter shelter, and pasture. Bacteria lives in pasture manure for 15-months and freezing does not kill it.

The test-negative herd must go through handling facilities before test-positive animals.

Hygiene is monumental in controlling this disease. Feeders, water tubs and all equipment should be suspect of harboring Johne’s. Remember that “splatter matters!” This means on your coveralls, as well.

“Johne’s is a marathon, it’s not a sprint. Control takes time and patience.”

Low stress environments seem to support healthier immune systems in general, and may be a tool in management. In any case, producers have to choose which path they want to take.

The best time to test is just prior to calving season or predicted delivery dates in pregnant cows.

“Maternity time is one time you’re going to want to separate potentially uninfected young stock from the rest of the herd.”

If the cow tests negative, she should be separated immediately to a clean environment. Do not expose new calves from test-negative cows to this disease.

“Once you get to these stages, your environmental contamination is off the charts. Just imagine a billion organisms a day!”

“One of the things that they say about this,” said Scrafford, “is that ‘the solution to pollution is dilution.’ So, you just start doing the best that you can.”

Go to https://ahdc.vet.cornell.edu/programs/NYSCHAP/ for more information.