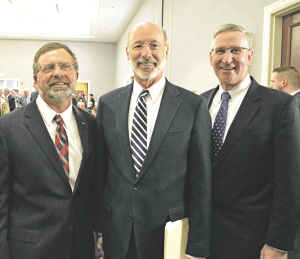 State Representative Martin Causer is visibly upset, the result of Governor Tom Wolf vetoing the Cameron/McKean/Potter County Republican’s bill, House Bill 915. The chair of the House Agriculture and Rural Affairs Committee sponsored the bill to exempt milk trucks from weather-related commercial travel bans. Passage of the bill would have ensured farmers could get their milk to market regardless of weather. Causer’s office says that if farmers cannot transport their milk, they have no choice but to dump it.

“The governor’s decision to veto this bill is very much at odds with what he says about support for our farmers,” Causer said. “Every single agriculture organization across the state supports this bill because they know dairy farmers have only two options for the milk produced on their farms: they have to ship it out or they have to dump it – period! Cows are going to produce milk no matter the weather forecast – you can’t change their milking schedules and you can’t just turn them off.”

The Pennsylvania Farm Bureau (PFB) agreed, calling the decision “disappointing.” According to PFB President Rick Ebert, “Milk produced on the farm is highly perishable and needs to get to a processing plant within a reasonable time. Dairy farmers have limited on-farm storage and when their bulk tanks are full, they need to be emptied by a milk hauler. If the hauler is not available, all excess milk must be dumped. Farmers lose thousands of dollars in revenue every time they are forced to dump milk.”

Wolf reasoned it this way: “A declaration of disaster emergency carries the gravest considerations insofar as the traveling public is concerned,” he wrote to the State House. “Furthermore, prior declarations have proven effective in lessening the danger to the public at-large during precarious time periods. Providing for an exemption to the travel ban under the declaration puts the public in jeopardy, which, in turn, endangers our State Police and first responders and even our milk haulers. In my view, such an exemption runs counter to the safety of the driving public.”

“I understand the governor’s concern for public safety in extreme conditions,” Causer said, “but when we look at the travel bans issued this past winter, most of the ‘storms’ turned out to be nothing more than typical wintry weather conditions, if that. And when conditions do deteriorate, keeping these heavy milk trucks on interstates and off of secondary roads, which are plowed and treated far less often, is often the safer option.”

“Milk truck haulers are accustomed to driving in poor weather conditions and operate their trucks with tire chains, winter tires and other safety gear that might not be present on other commercial trucks,” PFB’s Ebert added. “In addition, there were several instances in 2019 alone where statewide commercial travel bans were put in place as a precaution, but weather conditions did not warrant the designation.”

Wolf responded, “Typically, the bans are short in duration; however, they may be extended due to vehicle accidents or stranded motorists due to hazardous conditions on the highways. For example, on Nov. 15, 2018, a severe winter weather event occurred in this Commonwealth. Interstates 83, 81, 80 and 78 were closed for up to 15 hours while commercial vehicles were removed from the snow and ice that had built up around their stopped vehicles. Commercial vehicle bans were then initiated for the next five storms spanning from January to March 2019. With the bans in place, there were no significant closures on the interstate highways in this Commonwealth. According to the Department of Transportation, the commercial vehicle bans implemented during this time averaged only 18 hours in duration. This time seems like a small price to pay when considering the public safety benefits of the travel bans.”

PFB noted that sudden and absolute bans on transporting milk during weather events can place an added burden on farm families. “Dairy farmers need compensation for every gallon of milk they produce if they plan to recover from five consecutive years of depressed milk prices,” Ebert concluded.

Causer’s committee had held a hearing on his bill and tried to ensure the exemption was very narrow and could apply only to milk haulers. In fact, the bill would have required any haulers who wanted to take advantage of the exemption to obtain a decal issued by the Pennsylvania Milk Marketing Board.

“I’m not sure what the governor fails to understand about the problem his travel bans have caused for our dairy industry, which is already struggling to stay afloat,” Causer said. “You can spend all the money you want on things like developing the market for organics and increasing processing opportunities, but if you can’t get the milk off the farm, what’s the point?”