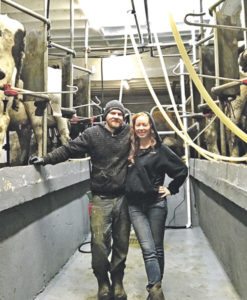 NEW HOPE, VA – David Shiflett and his son Jason operate Ridgeview Acres, a diversified chicken, commercial cattle and registered and commercial sheep operation in northern Augusta County. They have five chicken houses in which they grow six-pound broilers, and the income from poultry is critical to making everything work on the farm.

But there have been times when the poultry houses seemed more burden than blessing. There was the avian flu outbreak. At the time, David operated two houses, and his birds didn’t get the flu – but his houses were quarantined for an uncomfortably long time.

Then there was December 2007. At the time, it was just David – Jason hadn’t come back to the farm yet. David had two poultry houses and was growing turkeys. It was 2:30 a.m. when a neighbor called, announcing, “Your turkey house is on fire.”

“That will wake you up real quick,” David said.

His other son, Adam, who works for Farm Credit, was living on the farm at the time so David and Adam hightailed it to the turkey house. It was fully engulfed in flames. There was nothing to do but sit there in the truck, with his son, watching half of his investment in poultry production become smoke and ash and witness the loss of 15,000 turkeys.

“It was a pretty sickening feeling,” David said.

It was his worst day farming, but it also gave him the opportunity to reevaluate his situation. “We were already thinking about doing something different. When that happened we had to do something different.” They decided to switch to raising chickens.

The destroyed house was cleared and a new house rebuilt in its place. By May 2008, chickens were in the houses and the road to recovery was underway.

David has had moments of good fortune in farming as well. Having grown up on a beef cattle and dairy farm “just over the hill” from his current farm, he worked on his grandfather’s farm as a young man but then took a job teaching agriculture, first at Riverheads High School and then later at Fort Defiance High School.

In 1992, a man named Bob Morrison made David an offer to sell him his farm. The farm wasn’t publicly for sale, and David wasn’t sure if Morrison was serious. But when he called him the next morning, he found out that the offer was indeed sincere – Morrison was getting to retirement age and needed to find a successor.

Not only did Morrison make the offer, but he also financed the purchase of the farm for David. “If it hadn’t been for that, we would have had a hard time getting started farming,” he said.

Today, David operates his two chicken houses and Jason operates three more on an adjacent farm. Jason’s houses have been in production for three years and Jason has been full-time on the farm for two years.

Prior to coming back to the farm after graduating from Virginia Tech, Jason worked in the poultry industry for 20 years in a variety of capacities, at poultry plants and in the field, for a number of companies.

The last year he worked his full-time job while running the three houses was exhausting and required the help of his wife Kerri, who would watch the houses during the week, leaving him to try to catch up on the weekend.

The Shifletts have raised sheep since the 1970s, and today raise Dorsets and Suffolks – about 300 head total. Adam and Jason both in their day showed sheep, and today Jason’s sons Rylee and Aiden show sheep.

“We sell lambs to 4-H and FFA kids for showing,” David said, not just within the Shenandoah Valley but throughout Virginia. They also sell breeding stock and market sheep.

They have also been selling lamb to a local restaurant, but with demand for restaurant dining decreasing in the past year, the restaurant’s business has slowed, which has backed up production for the Shifletts.

Still, they continue to take steps to improve their operation. This year, they plan to build a sheep barn. A few years ago, when they built a barn for their commercial cattle, it simplified feeding and brought about a big increase in efficiency. They look forward to a similar productivity boost with the sheep barn, which will permit them to more easily control different rations for different groups of sheep. They hope it will be complete in time for autumn lambing.

The commercial cattle are primarily black Angus genetics, with some black baldies. Calving is in spring and autumn, to take advantage of different market conditions. Breeding is mainly done natural service with bulls bought from test, but this year they did AI with a group of heifers for the first time.

They sell feeder calves to local feedlots and through the Rockingham County Feeder Calf Association sales.

Using owned and rented ground, the Shifletts farm corn for sileage and to sell as grain as well as small grains, which they typically wet wrap. The sileage is made by a custom harvester and bagged adjacent to the cattle barn. This year they also planted a crimson clover-triticale mix for their sheep.

David has been full-time farming since 1999, when he left teaching. But he still stays connected to youth and education. He’s been a member of the Augusta County School Board since 2004. He’s also involved in a variety of youth ag organizations.

“The future of this industry is kids,” he said.

“So is the future of this farm,” Jason added.

“I’ve been in this area for 70 years,” David said, “involved in farming one way or another. I hope farming continues around here.”