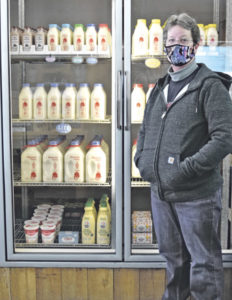 EAST CONWAY, NH – A creative and nimble response to customers’ needs during the pandemic has greatly increased sales in the Sherman Farm Market, now described as a specialty grocery store.

The 200-acre three-generation farm located on the Fryeburg, Maine border is located not far from a bustling four-season tourist area. Sherman is not only committed to safely serving local needs but also to being a robust venue in which local and regional farmers can sell a variety of products they’ve harvested or prepared, some under its own private label.

Sherman Farm sells glass-botted milk under its own private label that’s processed at Hatchland Farm in North Haverhill, NH. Milk and other dairy products only make up about 5% of grocery store sales but serves as a draw. Seasonal Christmas trees and wreaths are now supplied every year by The Rocks Estate in Bethlehem, NH, operated by the nonprofit Forest Society. Bobby Sue’s Homemade Ice Cream in Freedom, NH, supplies the 18 flavors of ice cream sold at the Barnyard Scoop, opened in 2019.

A beef cattle operation lies at the heart of the Sherman Farm. It’s a cow/calf operation of 150 Angus and Angus-Holstein crosses of all ages, featuring a permanent on-site herd that produces calves both for harvest and as replacement heifers. This year, 54 cattle are slated for processing at the Windham (Maine) Butcher. All the resulting cuts will be sold at the Sherman Farm Market. Two bulls are maintained on site, and AI is also employed.

The herd’s feed is a mix of high-quality grown-on-site forages (corn silage and haylage) plus spent brewers’ grain from two local micro-breweries. The farm participates in BQA training, a national program designed to raise consumer confidence through offering proper management techniques and a commitment to quality within every segment of the beef industry.

Roughly 25% of on-site market sales are made of beef and locally sourced pork and lamb. Chickens come from Misty Knoll Farms in New Haven, VT. Fruits and vegetables make up about 15% of sales, with 60 acres used to grow fresh produce on-site. Tomatoes, sold from June 10 to Nov. 30, thanks to both hoops and heated high tunnels, comprise the largest share.

The market has been adapted to meet COVID-19 health requirements: only 12 masked customers at once, preordering with curbside pickup, frequent sanitizing and an emphasis on orderliness.

The market has continuously expanded its offerings, including fresh fish and seafood deliveries from the Fisherman’s Daughter from the docks of Portland and Casco Bay. When customers couldn’t find any flour on supermarket shelves, Sherman repackaged the 200-pound commercial bags into five-pound bags and did the same with sugar. They continued to make fresh salads in the warm months and fresh soup in the cold ones.

A healthier cash flow allowed the farm to replace some aging equipment and to ramp up production. The Sherman Farm has evolved over the years.

Al and Phyllis Sherman, along with their two then-preschool-aged daughters, moved in 1964 from a rural part of Middlesex County, MA, and bought a small dairy farm, renaming it the Sherman Farm. A third daughter was born in the Granite State. Concerned about the dairy industry’s growing volatility, however, the cows were sold not long before Al died in 2008.

Phyllis is now almost entirely retired, although she answers phones when it’s all-hands-on-deck. Mostly, however, she takes pleasure in watching her middle daughter, Kathy, ably manage the farm’s operations with the help of her two adult children: Michele Hatch Dutton and Jeff Hatch.

Kathy became a full partner in the farm in the ‘90s; she and her mother, who now live together, own the bulk of the farm, with Michele and Jeff owning small shares. The siblings were raised on the farm, and, after careers elsewhere, both returned to the farm in the mid-2000s.

Sherman Farm employs eight people in winter and about 25 during the height of the harvest, including the six-week-long, 12-acre corn maze. This year’s theme was “Grow your community – support local.”

Kathy looks to the future, anticipating somewhat more intense rains and droughts, and very hot summers on the rich soils of the “low-bowl” of the Saco River.

“You don’t expect to get rich farming,” she said, “but it’s a wonderful quality of life with your family and community.”