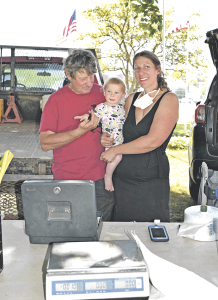 BETHEL, MAINE – John Carter, the seventh-generation Carter to own the Middle Intervale Farm on the banks of the Androscoggin River, sold nearly all his Holstein dairy cows in mid-May to the Newmont Farm in Fairlee, VT.

“I no longer feel ‘under the gun,’” John replied when asked whether he misses the routine of milking. “There’s a lot less stress and pressure. I loved being a dairy farmer, but it was time to get out of the dairy business. I feel bad for the people still in it.

“Maybe the new quotas being imposed by dairy cooperatives will work to lift prices, but I believe that the farmers themselves will still be at the financial bottom,” he continued. “Everybody else in the dairy business does better. The price of machinery that a farmer needs has doubled in price, but the price of raw milk has not. I used to be able to pay a worker $3 to $4 an hour, but now that’s moved up to $14 to $15 an hour, and almost every week someone I’m counting on doesn’t show up for work.”

John described the problem as one stemming from a fundamental shift in the 1930s away from small self-sufficient to farms to those that had larger herds which shipped to far larger milk processing plants.

Taken together, the Depression and World War II set a national goal of producing cheap food, and Americans now only spend eight to 10 cents of every dollar they earn on food, explained John, who is in his early fifties. “In my dad’s day, it was more like 25 cents on the dollar earned,” he said. “It’s the farmer who’s had to absorb the difference.”

Many dairy farms have been shuttered in Maine. There were approximately 900 dairy farms in 1985 and the number now hovers around 195.

Fewer than 10 milking cows are now on the Middle Intervale Farm, and they produce enough milk to feed some 35 calves.

“No matter how much we needed to sell the cows, it was what John has always done,” Lucy, his wife, said. “It was a good decision but a sad one. We can still enjoy our raw milk, feed our young calves and have some of our favorite cows on the farm. The weight is lifted off our shoulders. There is a lot of stress with dairy farming – financially, physically and mentally. We’re looking forward to winter and being able to relax and enjoy our family, early nights and the wood stove.”

Lucy and John have a one-year-old daughter, and Lucy also has three preteen sons, who are enjoying farm life.

In addition to selling meat at three farmers markets and an on-farm stand, plus having a U-pick flower garden, the Carters grow and sell a lot of vegetables: potatoes, zucchini, cabbage, cauliflower, broccoli, eggplants, peppers, lettuce, onions and tomatoes. “Woodchucks got into our high tunnel and ate 100 tomato plants this year,” Lucy lamented.

They grow sweet corn, planted successively, so that they can sell fresh ears from mid-July into October, when the snow often flies. The farm produces pumpkins and 15 varieties of winter squashes, as well as hay and straw.

“We also wholesale to area restaurants, including Libby’s Bistro in Gorham, New Hampshire, and small grocery stores, but not to supermarket chains,” John said.

Farming in western Maine is very competitive, and he’s close-mouthed about how many acres he owns and how many he leases. Thus far, John has not worked with a local land trust to put conservation easements on any of his flat fields whose soils are top-rated.

The classic brick-end farmhouse at Middle Intervale Farm was built in 1791 by John’s ancestor, Dr. Timothy Carter, the first physician in the region. The farm is surrounded by mountains, including Mt. Will, which boasts a hiking trail with a view of the whole farm.