Sen. Nolen continues Grazelen Farm with his son and grandson 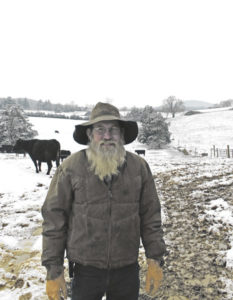 NEW HOPE, VA – Frank Nolen moved to the Shenandoah Valley in the 1960s. He came from western North Carolina to work at the GE plant in Waynesboro, then studied engineering at Virginia Tech, where he served as the student body president.

When he graduated in 1965, he returned to Waynesboro to work at GE. He bought his farm in northeastern Augusta County along Polecat Draft in 1967.

“I had to get a private loan,” he recalled. “It was covered in thistle and cedar trees. I set to clearing it.”

The first few years he didn’t have enough money to put out crops, so he partnered with a neighbor who wanted to plant barley on shares. After a few years, Nolen scratched up $600 for a SC Case tractor with a two-bottom plow and an old disc. Another neighbor had a converted horse planter which he used for planting.

For his first crop he hired out the picking, but by the end of it he had enough money to buy five cows and 15 shoats. “I’ve been raising hogs and cattle ever since,” he said. He also first ran for Virginia State Senate in 1974, and was in office for a short first term before going on to serve from January 1978 to January 1996.

Today, Grazelen Farm raises feeder calves, market hogs, grains and hay. The operation is a three-generation partnership between the senator, his son Will, and Will’s son Lee, all Virginia Tech graduates. The senator has been retired from public work since 2011, when he left the Grottoes Reynolds Metals plant, where he worked for over 40 years after leaving GE. Will has been farming with his father full-time since 2014.

“I’d always wanted to farm full-time and we were really behind on the farm so I decided to take a couple of months to catch up,” Will said. “We still haven’t caught up.” Lee has a full-time position as a mechanic at the James River Equipment dealership in Fishersville.

“I couldn’t be farming now without Will and Lee,” the senator said.

That’s something many farmers today could say about Sen. Nolen himself. During his 20-year tenure in the Virginia Senate he sponsored the Right to Farm Act.

Senator Nolen, who today is chair of Augusta County Democratic Committee, represented Augusta County, Rockbridge County, Lexington, Buena Vista, Staunton, Waynesboro and, in later years, southern Rockingham County. Throughout his time in the Senate he served on the Agriculture Committee, among other committees.

When Will returned to the farm, the Nolens started marketing their products at farmers markets in Verona and Waynesboro. At first they sold sausage from their hogs and eggs from a flock of layers Will established, but with time they also added beef from their cattle.

“Frank is the face of the farm,” Will said. “I do the behind-the-scenes work.”

When the markets are closed during the colder months, the Nolens deliver on Saturdays to customers in Staunton and Waynesboro. When the pandemic hit, they were overwhelmed with demand.

In addition to selling retail, the Nolens also sell feeder calves from their commercial cow-calf herd through Virginia VQA sales. They sell corn, wheat and soybeans as cash crops as well as some grass hay, alfalfa and straw. Will, an accomplished mechanic – he has rebuilt and retrofitted countless pieces of equipment over the years – also does custom mechanic work.

Their farm is testament to the work Will and Frank have done, from the crates Will built to haul hogs to the buildings they’ve made taller for storing hay to the large tank Will turned into a catchment for storing water runoff from one of the farm’s barns.

Over the years, the Nolens have adopted farming management innovations. By moving to rotational grazing, for example, they’ve been able to increase the size of their cattle herd. They’ve also begun renovating their pastures to MaxQ. They’re very economical, using soybean fodder for bedding in their cattle barn.

Nolen also believes in providing hay to cattle in the summer. “I feel like cows want dry matter in the summer,” he said. They’re careful with storing hay, keeping it under wrap or under cover. “Hay is too expensive to make not to protect it.” This year they’re trying dry-wrapped hay for the first time.

“We’re fortunate to have plenty of hay ground,” Will said, which permits them to have forage carryover from year to year – with one exception.

“It was dry – so dry – in 1977,” Nolen recalled. “The corn was only four feet high, so I put up a silo that year to feed all the corn as silage. We fed every bit of everything we had that year.”

“Thank God for the invention of the John Deere Gator,” Will said. “My father’s worn out one motor already.”

“Being able to farm with your father is an opportunity a lot of people don’t have,” Will continued. “I’m grateful for it, especially since it allows me to do what’s always been a passion of mine.”