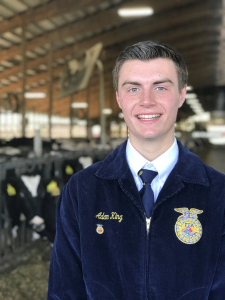 King, a senior at Schuylerville High School in Saratoga County, resides on Kings-Ransom Farm, a 1,200-cow dairy farm that specializes in producing high genetic Holstein cows while also operating a dairy creamery under the name King Brothers Dairy. As the fifth generation on the farm, King owns his own herd of cows and is a paid employee. Specifically, he is responsible for leading and assisting with various jobs that are necessary for the daily care of his and his family’s cows while also ensuring the health and wellness of the herd.

Following in the footsteps of many of his family members, King joined FFA in 7th grade. Throughout his membership, he has strived to take advantage of as many opportunities as possible which have allowed him to attend numerous FFA conferences, State FFA Conventions as well as the 2019 National FFA Convention. In 2017, King was a member of the top placing New York State Dairy Judging Team, where he also individually took home top honors. Additionally, since first joining, King has continued to lead the Schuylerville FFA Chapter by serving as a Chapter Officer throughout both his Junior High or Senior High careers.

“FFA has truly taught me the importance of time management, being disciplined and focused, while showing me just how much you can accomplish through hard work and dedication,” said King. “I really do credit where I am today because of my involvement in FFA and the lessons that I learned and continue to learn on the farm.”

Outside of FFA, King is in the National Honor Society, is a graduate of the 2019 New York State Junior Dairy Leaders Program through Pro-Dairy and is a member of both the New York State Junior Holstein Association and New York State 4-H. Through these opportunities, he has competed in dairy judging competitions where he has taken home state and national award honors and attended many Holstein Conventions where he has received awards for both his and his dairy herd’s achievements. This past January, King was also elected to serve a second term on the New York Junior Holstein Executive Committee.

“Whether it is working on the farm, participating in FFA events or just learning about the agricultural industry, Adam’s passion for agriculture shines through each and every day,” said Mary-Elizabeth Foote, Schuylerville Agricultural Science Teacher and FFA Advisor.

Next year, King will continue to pursue his passion in agriculture by attending Cornell University to study Agricultural Sciences. He says that by studying at Cornell he not only will be able to meet others who share his passion for farming, but the opportunities that Cornell can offer him through programs like Dairy Fellows, the Dairy Science Club and other organizations will further develop his knowledge in agriculture and help him be better prepared to return to the family farm after graduation.