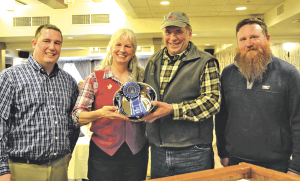 RANDOLPH, NH – John and Jennifer Scarinza received a shiny silver bowl engraved with the name of their sugarhouse in the White Mountains – Scarinza’s Sugarhouse – and the name of the prestigious award – the Lawrence A. Carlisle Memorial Trophy – that they’d won.

Both a first place blue ribbon and the Carlisle Trophy are awarded every year by the nonprofit New Hampshire Maple Producers Association to recognize the best maple syrup made in the state the previous spring. To qualify, a sugarhouse must have won one of the top three ribbons at state agricultural fairs. John and Jenn won two blue ribbons at the Lancaster Fair and the Deerfield Fair. Both hang on the wall of their sugarhouse.

The couple met in 2004 at Fuller’s Sugarhouse in Lancaster and were married nearly 10 years later. Jenn, a Loudon native, moved in 2003 to Whitefield to teach at White Mountain Regional High School. She continues to teach a variety of natural resources, agricultural and environmental courses there and serves as an FFA advisor. John, who graduated from Gorham High School, joined the local police department, and later joined the New Hampshire State Police, ultimately serving as Commander of Troop F in Twin Mountain before he retired.

The always unpredictable maple syrup season is nearing its close with some warm days and mostly cold nights. Usually it ends this far north about April 15. The couple put in taps that flow into a single 600-gallon stainless steel tank. They use modern technology, like reverse osmosis, but enjoy depending on traditional wood logs – dried, cut and split by John – to fire up their evaporator.

Winning the Carlisle Trophy brought attention to the couple’s sugaring business. Their unusual love story was featured, complete with a front page photo, in the March/April issue of “The Communicator,” the New Hampshire Farm Bureau Federation’s newspaper. Josh Marshall, the NHFBF director of communications, interviewed them as they were preparing for the 2020 season.

“There are volumes more to tell from the stories of John and Jenn Scarinza, but it all boils down to two sugarmakers who found their better half,” he wrote. “Together they share their love of the forest and the craft of making maple syrup, all while providing opportunities for others to enjoy those passions too.”

Jenn emphasizes her strong belief that teaching traditional New England skills helps today’s students connect to their heritage and to local forests, many of which are privately-owned, plus the 844 acres of state parks and almost 800,000 acres in White Mountain National Forest.

For many years a sugarhouse has been part of the landscape on the 200-acre WMRHS campus and sugaring part of the natural resources curriculum. For the first time this year, Jenn is teaching a second semester maple sugaring course at the 365-student school. “They not only learn about tapping and boiling but also lots of math and safe food preparation practices as they make maple candy and sell syrup to the public,” she said. This year, COVID-19 interrupted the planned coursework, and Jenn has been videoing their work in their sugarhouse to use teaching remotely.

Many of the 300 people who live in Randolph and the nearly 3,000 who live in Gorham enjoy watching the couple (along with some of their eager-to-help friends) collect and boil the sap from their 46-acre sugarbush. These customers like to buy the single-source maple product made from trees they can see leaf out in spring and turn vivid colors in autumn.

Jenn and John sell all their products at retail. One family has twice ordered maple syrup favors for weddings: the first time in small bottles, the second in small plastic jugs.

The couple is also among those who donate syrup to the annual Randolph Volunteer Fire Department’s breakfast in August to raise money for its traditional children’s Christmas Party. Jenn thanked her parents (Letty and Allan Barton) for teaching her and her brother to collect sap at their home farm in Loudon, using oxen and a scoot. Her brother, Tim, and his wife Terri, and her five nephews continue the family tradition.

The Carlisle Trophy is named for Lawrence A. Carlisle, a New Hampshire Commissioner of Agriculture in the 1920s and 1930s who was devoted to the development of the state’s maple industry and best known for introducing the maple grading system.