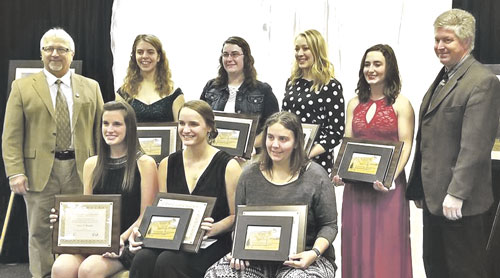 To win this award, one must compile a comprehensive document that is both a curriculum vitae (all of the awards and accomplishments of one’s farming career so far) and also a comprehensive statement of one’s future plans for one’s herd. This information is added to classification scores (awarded at shows) because conformation counts too.

This document is not a dreamer’s vision but is compiled of cold hard facts of the breedings and the result of them to the bulls she has chosen to complement and improve the cows that comprise her herd. These records are then checked with the data that has been recorded into the Jersey Association’s databases, not for accuracy but rather for the plans she has for the future and the direction she will take to achieve it. The bulls she has chosen are minutely recorded in the national registry for their ability to create the cows of the future and her choices were judged against the predicted accuracy of those matings with her own cows. This is in addition to the herd statistics she has compiled with daily, weekly, monthly and yearly milk production entries. It is, in fact, the whole compilation of a working farmer’s journal of her business plan and its effectiveness in the actual working lifecycle of a dairy farm. Her records must show she is moving her dairy forward in a progressively upward cycle.

Catharine Savage’s particular specific idea for her plan was to show a high parent prediction +/- for the production of milk fat, and it placed her at fifth place in the competition.

Each state in the United States can send entries, but it will come as no surprise that, with the difficulty of the project, the actual numbers of youth who try for this are usually somewhere between 20 and 25 people who choose to try this difficult task. Of these, the top 10 are chosen and the placements are awarded. It is interesting to note that if a state has a previously chosen person who has placed, they can go as a returning entry, as well as the state’s chosen entry, for that year.

Applications are sent in March. In July, applicants receive notification of whether they are in the top 10 and their placement in that group. In November, they go to the awards banquet for their award plaques and a very nice canvas reproduction of the famous Bonnie Mohr Jersey cow painting and, happily, a scholarship award. Savage won the Production Youth Award Scholarship, and it was given to her by Neal Smith, executive secretary of the National Jersey Association.

According to Savage, the banquet was “Cool! I got to see a lot of friends that I had made when we’re all out at the shows.”

When asked what her intentions were after college, Savage answered, “Well, it will certainly be in agriculture and very likely in the dairy industry.”

Questioned about whether she saw herself in an advisory position in an office, she replied immediately, “No! It will definitely be in the field in some capacity. I would go crazy if I had to sit behind a desk for that long!” – spoken like a true farmer.