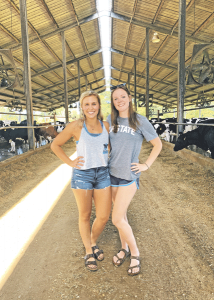 After a long day of working, I now have layers of red clay under my fingernails instead of the dark brown New York soil. That was one of the first things I noticed when I moved to Georgia: the dirt (technically, clay). It’s burnt orange color makes me question how anything grows in it. I moved to Georgia for a change in scenery and I got exactly that. So many country songs sing about Georgia pines, and now I know why. They are beautiful, tall, and you can find them just about everywhere you go. They remind me of asparagus, as they are long and skinny with branches only at the very top. Moving here has given me the opportunity to live in a completely different environment compared to New York. Just like the trees, lakes, dirt and animals are different, so are their farms.

About a month into my journey here in the South, I was given the opportunity to take and film a tour on a dairy farm called Schaapman Holsteins. We live near Atlanta and the farm was about two hours south of us. The drive down was eye-opening. As we got farther and farther from the city, we noticed that the agriculture industry really thrived down here. In New York, I am used to seeing the classic fields of hay, corn, soybeans and wheat. I saw none of that as we passed the many fields. Instead I saw crops that I had never before seen. I had to Google what most of them were. There were vast fields of peanuts, cotton and tobacco. Every field had a center pivot irrigation system. You’d understand how essential these irrigation systems are just by stepping out of your car and spending five minutes in the Georgia heat.

Georgia is known for its peaches. I was told they grow close to 30 million pounds of peaches every year. On our trip down to tour the dairy farm, we saw several orchards of peaches and, to our surprise, pecan trees as well. Several trucks pulling wagon loads of watermelons passed us. That was humorous for me, because my family owns a 70-acre pumpkin farm and we load up pumpkins the same way they did the watermelons.

When we arrived at the farm, I was so intrigued by how different their dairy was set up as compared to the home dairy in New York. The first thing I noticed was how open all of their barns are. There were no walls on any of the barns or the parlor. Every freestall had several sprinklers that the cows could stand under to cool off. The parlor also had sprinklers attached to all of the fans so the cows could stay cool in the holding area. The calves were in hutches with the back sides propped up so they could get proper air flow. Instead of being bedded down with lots of straw, they were given sand and very minimal bedding to keep from overheating. The calves also had additional shade outside of their hutches. On my tour, I was told it’s not ideal to have dairy cattle in the South, but they do what they can to maintain a comfortable environment for them.

Georgia has a vast agriculture industry that I am just beginning to explore and learn about. I recently took on a job at a pumpkin, Christmas tree and produce farm called Sleepy Hollow, where I am learning even more about farming in the South. The main concern down here is water. Although there is plenty of rain in the summer, the ground dries up very quickly from the sun and heat. Irrigation is a must for farmers down here. Learning to work in the heat was definitely an adjustment as well. Plenty of water and a hat to block the sun are my daily essentials on the farm. I made a good decision when I left my bibs and winter hats at home. (They consider 60º cold here!) Although the heat makes things difficult in the summer months, it will be nice in winter when I don’t need to put on five layers and worry about my fingers getting frostbite.

I plan on using my time in the South, however long that may be, as a way to learn about farming in two very different parts of the country.