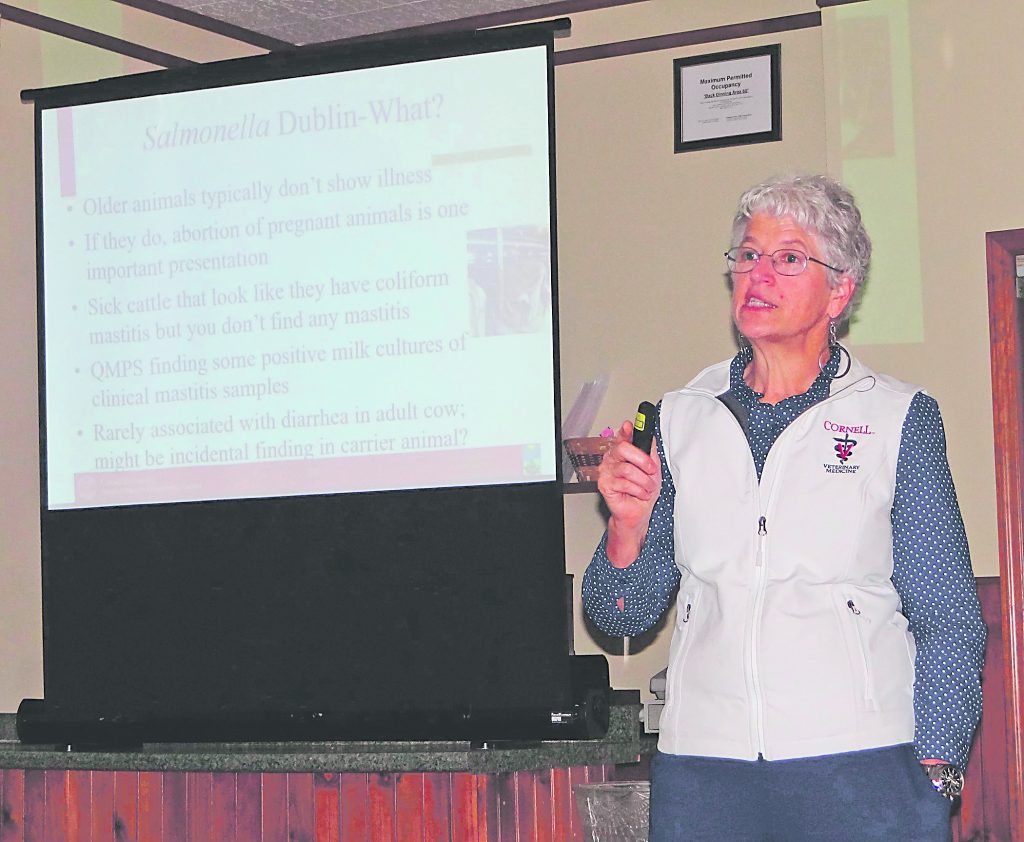 by Elizabeth A. Tomlin
It’s a “buyers market.” Are you thinking of expanding your herd? Or maybe buying into an existing farm that has just come on the market?
You had better look twice.
“I don’t want to hear anyone saying they didn’t know about this,” said Dr. Belinda Thompson, Cornell University College of Veterinary Medicine’s Animal Health Diagnostic Center (AHDC), Senior Associate.
Salmonella Dublin (SD), an insidious, invasive disease that can be carried silently by mature, healthy-appearing cows, and which also lives on in barns where infected livestock have previously resided, has spread into the Northeast.
It is on the rise and is not to be taken lightly, as farmers that have had it – or have it in their herds currently – will attest to.
Furthermore, folks working with cattle and children playing around cattle are also at risk, as this disease can “jump between species” – a frightening fact that also affects companion animals and other livestock.
“We have seen this in both dairy and beef cows,” reported Thompson, adding that some veal farms have also been severely crippled by the disease.
SD bacteria are shed through bodily fluids and waste, including manure, urine and vaginal secretions, as well as through the infected cow’s milk and colostrum. It can be passed in utero and is also shed in infected bone marrow. Shared needles when administering shots can spread the disease and is discouraged.
“It’s resistant to multiple antibiotics – in fact, most antibiotics available to us as veterinarians and farmers,” explained Thompson. “It typically rears its ugly head by killing calves. It’s a very frustrating disease for the people on the farm who are taking care of calves.”
High morbidity and high mortality rates are reported for infected calves.
A notable fact for detection in calves is that, unlike other strains of salmonella, SD symptoms do not typically present themselves as diarrhea; they do present themselves as a respiratory disease, with fevers ranging in the area of 105 -106 degrees. Diarrhea usually follows as a later symptom.
Infected calves are generally stricken between two and 16 weeks of age, with calves typically being struck down at around eight weeks of age. (However, cases have been documented in calves as old as eight months.)
One case study concerning a calf-rearing facility was discussed.
Documented information reported a 20 percent loss of calves housed on that farm, with repeated results year after year. Calf owners finally realized their losses and investigated. Unfortunately, they found carriers among the calves who had survived and co-mingled with their heifer herd.
Calf barns with robotic milk and feed dispensers should be closely monitored, as contamination spreads quickly throughout calf populations in this type of environment – so quickly, in fact, that SD mutations can pass off their antibiotic-resistance genes to non-like bacteria, creating new mutations in that species as well.
Infected calves should be isolated promptly, minimizing exposure to other calves. Facilities should be disinfected. Hygiene is essential.
Calves treated successfully have a higher chance of becoming carriers of the disease.
Although SD bacteria are frequently dormant in carrier animals, spontaneous abortion in cows is one symptom to watch for.
Thompson said any sick cow with no sign of mastitis should be suspect of this disease.
SD can become systemic, affecting the blood, liver, kidneys and other organs, and has been found settled in afflicted animals’ lymph nodes. All cattle that test positive for the disease should be isolated quickly and culled as soon as possible. “Isolation” should be exactly that. Infected animals should not share any living space or connected space with the rest of the herd. Animals being treated should always be fed and handled last.
Shared maternity pens should be of concern, due to co-mingling. “Calving cows are at their peak risk of infection,” Thompson said. 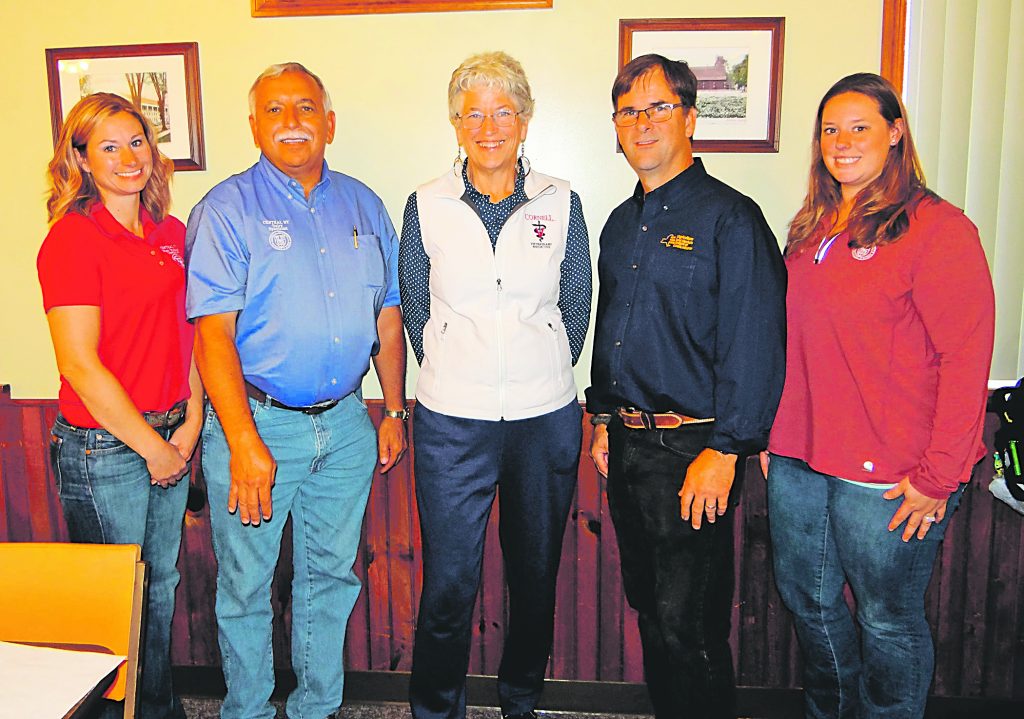 Be wary of bringing in milk or colostrum from other farms, even in the case of emergency. Bagged colostrum is safe due to processing.
Because silent carriers shed this bacteria in their milk, be sure that milk possibly contaminated is not fed to calves – or people!
Human SD infection patients have been linked to ingesting contaminated raw milk, and Thompson pointed out that this is not a risk worth taking.
She emphasized that this is not just a dairy issue, and she reported that a reputable large beef farm was struck a tremendous financial blow because of silent carrier cattle bought and incorporated into the existing herd. This also affected the marketing of farm bulls.
“You can go out and buy this for your farm by buying cows,” she remarked dryly.
Pre-screening before bringing new animals into your herd is advised and should be protocol on your farm. The cattle you skip the testing on will be the ones who bring it in. The larger the herd, the more likely you are to have it.
A quick and easy, cost effective, SD blood test is now available through the Cornell University College of Veterinary Medicine’s Animal Health Diagnostic Center. Bulk tank samples – or milk samples taken directly from cattle – can also be used for detection of carriers and to determine if a herd has been exposed.
Although Thompson reports that New York farmers are not utilizing these tests as they should be, Canadian farmers are increasingly requesting them.
Farmers are advised to be proactive about screening for this disease and keeping it off of their farms to avoid the financial drain and stress it creates. Thompson pointed out that there is a huge impact to farmers’ livelihoods due to SD.
Weather impacts the occurrence of the disease and autumn is a time when the disease seems most prevalent. Wet conditions and environments promote growth of the bacteria, which has been discovered thriving in ponds and pastures.
Additionally, show animals are at risk and can bring SD home with them. They should be isolated when returning home from showgrounds.
As Benjamin Franklin said, “An ounce of prevention is worth a pound of cure.”
David R. Balbian, Area Dairy Management Specialist, Cornell Cooperative Extension, Central New York Dairy, Livestock and Field Crops Team, coordinator of this event, commented on the disease.
“What struck me about Salmonella Dublin is its resistance to antibiotics and the huge economic losses that occur if you get it in your herd,” Balbian said, stating that one example from Europe showed losses of up to $218 per stall per year for the first 10 years affected.
“That’s a $21,800 loss per year per 100 cows,” noted Balbian. “That is why it’s important to prevent it from getting into your herd. Prevention should be the number one goal.”
Balbian said a good start with detection would be to have four bulk tank screening tests over a five to 12 month period.
Contact the NYS Cattle Health Assurance Program (NYSCHAP) at 585.313.7541 for more information and concerns about prevention and management of Salmonella Dublin.