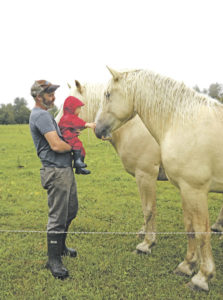 Roy Nilson was dodging rainstorms and Hurricane Henri to bring in the hay. The first-generation farmer has 10 to 15 acres of second cutting waiting down the road from his new home. He drives his train of three – tractor, baler and hay wagon – to the 60 acres of fields he currently hays. Conway is the furthest he travels now to bale hay from his Ashfield, MA, home.

When he started his farming adventures, he would find fields in which to keep his livestock and move within a half hour’s driving distance. He kept apartments in Petersham, where he grew up, Orange and surrounding towns. “I would put livestock on land. I had 140 acres in Leyden. I spent more times getting stuck in snow driving over to feed them than you can imagine. I figured it out the best way I could.” He drove a 1942 John Deere tractor and one of the first non-stationary balers John Deere ever manufactured.

People needed someone to hay their fields, and he could, and did. “The very reason I came out here is because somebody asked me to mow 20 acres. They said I could have the hay if I could do the work. People were begging me to mow hay.” His payment was the hay. Until recently, he hayed 100 acres.

“Ten years ago, the farmers that were making hay couldn’t afford to live here. It was not profitable,” he said. “Other landowners didn’t want their fields growing up as goldenrod.” New landowners offered, “You hay this, you keep it.”

The credo of “You work with this, you can keep it” has followed him ever since he started working at the Farm School in Athol, MA, in 2000. “I came there to mow lawns and paint stuff,” said Nilson. At the Farm School, he met an elderly 2,000-pound Belgian trained by the Amish that nobody knew how to drive. His name was Mac. “Like many American Belgians, he was phenomenally good,” he said.

Before Nilson’s stint there, a woman trained in riding horses was driving Mac. “A single horse can have two straps that would, with his britchen, stop the wagon from hitting the horse.” He’s not sure if there was “too much slop in the hitch, or too long hold back straps, or if they were not hitched at all.” However, “due to a mis-adjustment in the hold back strap, the front wagon hit Mac in the hocks. He spooked and it hit him harder. He splintered the front of the wagon and it stabbed and beat him. It was a bloody nightmare.” As a result, Mac was retired as a very high-risk animal. When Nilson met him, he took him in hand, though a novice himself.

“My successes with that horse started my career. He was one of those super horses. He really brought me along. The Farm School sent me off to get training. I used him to draw wood, cleared fields of hardwoods, edges of fields,” he said. “Years later we were coming downhill out of the woods pulling a half cord of green firewood when a hold back strap just gave out. That same rebuilt wagon hit him again in the hocks. I asked him to hold the wagon back with it resting its weight and the weight of the firewood exactly on the place where he was once injured. I stepped down from the seat and used firewood from our load to stop the wagon from rolling, Mac bearing weight on his hocks the whole time. Then I asked Mac to give one step forward so I could unhook him and he did exactly what I asked … We walked home and fixed his harness, leaving the wood and wagon safely behind us. If he wasn’t so great at what he did, I would never would have had the career that I did. For some reason, even after all the difficulties in his life, he found a way to help me out.” Mac’s misadventures included getting stung by bees and sinking in a pond.

Much later, after leaving the Farm School, when Nilson heard that Mac had passed away, he was surprised how much it felt like losing a human relation. “I couldn’t have fathomed it. After that, I changed the way I spoke. I referred to him as an individual. I would start a story ‘I knew an individual’ when talking about Mac. He gave me a view across a species.”

In 2003, the Farm School sent Nilson and another employee to pick up two American Cream draft horses in Ohio named Molly and Maggie. He drove them to make hay. When he left the Farm School in 2007, they gifted him with the pair. “To this day, I have questioned, why the generosity? I thought they’d stay at the Farm School. It was one of the biggest shocks of my life, like finding the Holy Grail. And here they still are.”

When the farm he was renting with his wife Diana in Ashfield with 15 acres went up for sale, they had a 10-year-old son, Haywood, after whom the Haywood and Father Farm was named. Nilson said, “I didn’t think we’d be able to buy this place.” Like Mac, the community and his family pulled more than their weight to support him. His sister set up a GoFundMe page, which raised $25,000 of the $90,000 down payment needed for the $450,000 purchase through Farm Credit East. Some of the money listed on the GoFundMe page was family money. Down to the wire, they had about $40,000 before a neighbor (who wishes to remain anonymous) who heard the farm was for sale pulled in the driveway and handed him a $30,000 check – another shock. “Weird things like that happened,” said Nilson. Another person donated closing costs. “It wouldn’t have happened without them,” he said.

Their American Cream draft horses have an additional two stallions, Shepherd and Baby Mac. “Molly could work all day and still have stuff to go. She’s a little headstrong,” he said. They have gentle eyes, and are almond-colored, the color of the curls of the Nilson’s second son, 14-month-old George, as though his curls were made to order. “The Creams say something about our style, our efficacy.” His horses were featured in the USPS Heritage Breeds stamp collection that released earlier this year, available at post offices and online.

They harness easily in relation to their height, have a wide span to their chests, or heart, in comparison to the length of their legs, “like a real low set of gears, giving real good leg control.” In his opinion, “the smaller horses are experiencing a revival. For the new people that have horses, I pray they will look to the working attributes of the animals.” American Cream draft horses would fit the bill. Nilson owes it all to Mac, his family and his community. For more information, access livestockconservancy.org.