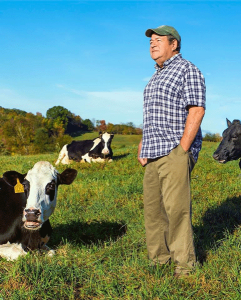 Cows are our friends, and Rick Osofsky wants everyone to realize it.

As co-owner and operator of Ronnybrook Farm in Ancramdale, NY, he is a third generation farmer, and his family has been tending dairy cows since 1930s.

“Cows are amazing creatures, when you stop and think about it. They’re the most efficient machine I could think of, better than a 3D printer… When you really take in what they’re doing, they take something as simple as grass and they turn it into something with nine essential nutrients, including calcium and protein, to help us stay healthy and strong. That’s pretty amazing to me,” Osofsky said.

He is also irked about the bad rap milk has gotten lately. “We’ve been drinking milk for 10,000 years, and we were doing fine. All of a sudden, about 40 years ago, people decided whole milk was bad for you… I think there were people, those behind the sugar and processed food products, pushing the idea that all fat was all bad all the time, so people started to move toward other products – soy milk, almond milk, stuff like that. What good did it do? Childhood obesity is a bigger problem than ever! Milk was a scapegoat. Milk is good for us. We can’t be healthy without fat in our diet,” he stated.

Osofsky, an alum of Wesleyan University in Middletown, CT, along with his brother Ron Osofsky, who studied agriculture at the University of Rhode Island, began offering unhomogenized milk in glass on their dairy farm about 30 years ago. Ronnybrook’s mission statement is “to provide a local source of fresh, minimally processed, all natural dairy products wrapped up in an overriding commitment to the humane treatment of animals.” Ronnybrook consists of about 800 acres, and its herd has anywhere from 350 to 400 cows. “We’re milking 90 or so at any given time,” Osofsky explained.

Ronnybrook’s distribution spans from New York City to Albany. Their products are sold at Whole Foods and are fixtures at rest stops along the New York Thruway. The farm keeps about 35 full-time, year-round employees, and 15 part-time and seasonal ones. “It’s hard to get people to work up here,” Osofsky said. “We’re out of the way, in the country. There’s not a large labor pool here, and not many are willing to travel.” He said the difficulty in attracting workers from downstate has resulted in Ronnybrook hiring employees from Brazil, Guatemala and Mexico.

In addition to finding adequate laborers, other issues are faced by Ronnybrook. Osofsky said, “We’re getting pummeled by the competition – almond milk and stuff like that. Almonds are fine, have a handful of them, but it’s no substitute for cow’s milk. They have to put a lot of additives in it to try to duplicate what cows give us naturally.”

He is also sad to report that consumption of cow’s milk across the board is down, in some areas by as much as 50% in his estimation. Osofsky would also like to address concerns raised by vegans over the treatment of livestock, declaring, “Our cows are very well cared for. They’re like family.”

Looking to the future, Osofsky announced Ronnybrook will be looking to expand its offerings. “Right now, we’re working on a high protein, drinkable yogurt – a sort of cross between yogurt and an energy drink. We’ll keep trying to get the healthy stuff out there for people,” he said.